The hilarious moment was caught on camera in the 20th minute of the game in Villarreal, Spain. 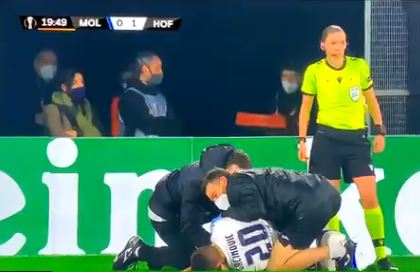 Hoffenheim ace Mijat Gaćinović was down injured and being treated by physios.

His side were already 1-0 up thanks to Mu'nas Dabbur's opener.

Ref Stephanie Frappart was overseeing proceedings and suddenly the fast food courier appeared at her shoulder.

The masked man was carrying two pizza boxes and a bottle of Coke.

He strolled confidently out of the dark and immediately stopped as he was drenched by floodlight and slowly realised what he had done.

The baffled bloke – who appeared to have a security pass around his neck – looked side to side as he realised he had stuffed up.

Dabbur scored again around nine minutes later before Molde pulled one back through Martin Ellingsen.

Christoph Baumgartner restored Hoffenheim's lead on the stroke of half time but the Germans fell to pieces after the break as Eirik Andersen and David Fofana earned the Norwegians a 3-3 draw in the last-32 tie. 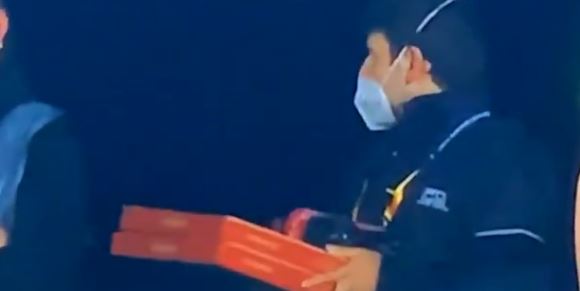 It remains unclear whether someone in the stadium had ordered the Italian feast or the man's SatNav had made him take a wrong turn.

Fans found the footage hilarious as it surfaced online.

The original clip received more than 1,000 likes and 270 retweets.