MICAH RICHARDS repeated an old goal celebration and CARTWHEELED in the CBS studio alongside an in-stitches Jamie Carragher.

The Liverpool legend was shown just how his fellow pundit used to react to goals back in his Manchester City 'glory days'. 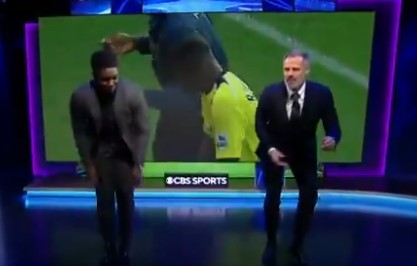 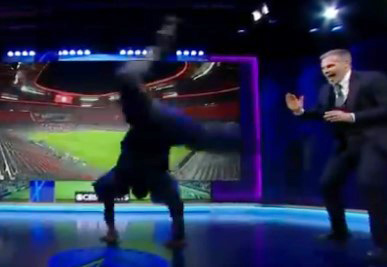 During Wednesday's Champions League coverage for the US TV network, the pair, along with Kate Abdo and Alex Scott, got onto the topic of Richards' famous moves.

Turning to Carragher, the former defender stated: "Come on then, I'll show you."

Richards and Carragher leapt up and the studio screen behind them showed footage of the 32-year-old dancing alongside old Citizens pal Ishmael Miller.

The pair then hilariously replicated the jig, Scott joking that Carragher was 'on strings' with his attempt.

More footage from the same game was then shown, as the ex-City star struck a last-minute equaliser away to Everton in 2006.

Richards dubbed it the 'glory days' before watching himself do two somersaults on the Goodison Park pitch.

He remarked: "I'm not attempting to do that here, not a chance!"

However, he was lured into it and Carragher hopped back up with him, adding: "If your suit goes, I'll buy you a new one."

Richards then duly pulled off two cartwheels in the studio as the team cried with laughter.

It was certainly not the first time the pundit duo have caught the eye on US tele after they argued over Jude Bellingham's disallowed goal the night before.

They also memorably took aim at each other over their medal tally, leading to Richards bringing in his Prem gong to show to the crown-less Carragher and leave fans in stitches. Watch out Gary Neville…

Evander Holyfield fears Mike Tyson, 54, will gas out after Roy Jones Jr and NEVER give him trilogy fight