MARK CAVENDISH slammed his bike to the ground, shouted at his mechanic and stormed off onto the team bus in a heated row during the Tour de France.

The Brit screamed 'F***ING HELL!' after an issue with the front end of his bike but has since apologised for the outburst. 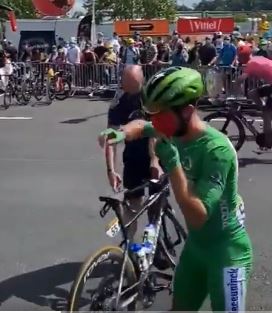 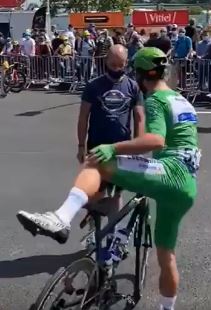 He has already equalled Eddy Merckx's 46-year-old record of 34 stage wins but could not go one step further.

An early mass fall and other teams' unwillingness to prevent a breakaway meant a large group built up a big lead over the main pack.

But focus after the stage was on Cavendish's temper getting the better of him before the 19th stage.

The clip – which has circulated online – shows a mechanic adjusting the front end of Cavendish's bike and twisting the handlebars each way.

He hands it back to Cavendish who tests it himself before reacting furiously.

The rider lets out a scream before slamming the bike to the ground and storming onto the Deceuninck–Quick-Step team bus.

He yells 'Sort it out' as he clambers back on the bus and screams 'F***ING HELL'.

After the angry outburst, Isle of Man born Cavendish took to social media to apologise.

He posted a picture of him alongside his team and wrote: "Many of you will have seen the video from the start of today’s stage.

"During a day of the Tour de France, as riders we are put in a perilous situation and I wanted my bike to be perfect, in order to help me stay safe.

"My bike had some problems when I got on it this morning. Despite this, I should not have reacted in the way that I did and not so publicly.

"I've been extremely close friends with my mechanics for over a decade and they’ve worked tirelessly to ensure I’ve always been safe and successful.

"Although they know how short I can be when I'm stressed, no-one, especially those you care about, deserve to have a voice raised to them.

"Truly, one of the biggest factors of the success @deceuninck_quickstepteam is that we are a family, and we love and care for each other, and conversations should be kept within that family.

"We have now spoken about what happened and as a group the Wolfpack will do our best to have a successful finish to #tdf2021."

Cavendish's return to cycling has been remarkable having bounced back from an incurable virus and and a broken shoulder.

If sprinter Cavendish wins the final stage in Paris he will have cycled straight into the history books — with even the French celebrating his achievements.

The Manx racer has been backed all along by wife Peta Todd and the couple’s four children, who will be there on the Champs-Elysees hoping the dream comes true.

Speaking to The Sun, the 34-year-old former model and Sun columnist called his achievements a 'fairytale'.

In a Sea of Catching Options, Wilson Ramos ‘Commanded the Room’

Man Utd must fix Pobga problem, goalkeeper dilemma and work out how to cope without Rashford to challenge next season