Czarson earned a trip to the Gold Coast and a shot at the Magic Millions Classic, but the Gai Waterhouse and Adrian Bott stable will produce an even better two-year-old at Wyong on Wednesday.

Czarson did well to lead throughout and defy a betting drift in the opening race at Rosehill, and the stable was always confident when the colt galloped with smart stablemate Unite And Conquer on Tuesday morning and was only beaten a length. 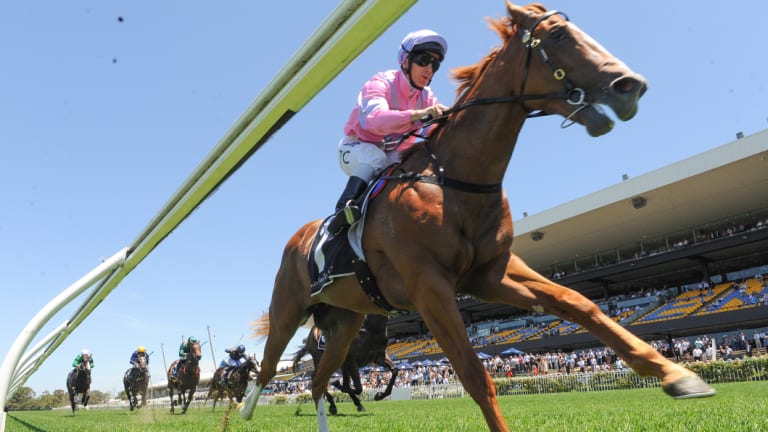 Baby steps: Czarson stretches out in the closing stages of his win at Rosehill.Credit:AAP

The two colts will fly the flag for Waterhouse as she chases her fifth Magic Millions Classic.

Czarson was initially pencilled in to run at Wyong on Wednesday, but the stable conceded he would have competed for second prizemoney given the ability of Unite And Conquer.

"This horse has improved so much from his last start. He was really switched on. We knew he would have no problems with the 1200m and would relax.

"Adrian Bott is in Hong Kong and was having coffee with the owner watching this race. I'm sure they'll be having some dim sims now.

"Two months ago we thought he wouldn't win or be ready to run in a race, but we put him in at Gosford and hoped he would run well. He won and the improvement he has since made is incredible.

"It's amazing what one run can do."

Jockey Tim Clark was impressed by the effort and said: "He jumped well, travelled nicely and quickened. After one trial he's come on a lot. He was treading water for a bit before that, but he's doing a good job now."

Clark praised Unite And Conquer, who won the Maribyrnong Trial in Melbourne at his only start, and there was no chance he would be able to replace his regular rider, Adam Hyeronimus.

"I wouldn't be able to get him off with a crowbar,'' Clark quipped.

Hyeronimus revealed: "I've done everything with the horse and he's a much stronger horse this preparation, especially after the trip to Melbourne.

"He's very professional. I jumped him out six months ago and said to Gai, 'this is the two-year-old I want to ride', and he hasn't let me down yet.''

Czarson will have one more lead-up run north of the border before the January 12 $2 million feature, while Unite And Conquer was likely to head straight to the juvenile race if everything went to plan at Wyong. He is the $8 early favourite for the Magic Millions with the TAB, with Dubious, the Breeders Plate winner who is also nominated for Wyong, the second elect at $11.

Czarson ($4.20) pounced to the lead at Rosehill and piled on the pace before the turn to go on to win by two lengths from Godolphin's  Kiamichi ($5.50), while $3 favourite Creator got his act together late to grab third.

"I thought he ran as well as he could," Creator's jockey, Kerrin McEvoy, told stewards afterwards. "There were no excuses. His attitude seemed spot on. He felt like a horse who will enjoy it further.''

Waterhouse is enjoying her end-of-season trip in the US, where she was last spotted in Disneyland.

Meanwhile, stewards have cleared Josh Parr of any wrong-doing for his ride on short-priced favourite Roheryn, despite his manager, John Walter, tipping a rival horse and eventual winner Chess Star on his tipping service.

While Parr was criticised for his tactics between the 700m and 600m in the November 17 race at Rosehill, stewards were not prepared to issue any charges.

Walter also confirmed he did not have a bet on the race, and he simply tipped Chess Star rather than   his client's mount  because of the value.

The issue raised the question about whether jockey managers should be allowed bet on races.