Prime Minister Scott Morrison says Australia must show “a little bit of flexibility” around the vaccination status of international arrivals, opening the door for unvaccinated tennis stars to play at Melbourne’s Australian Open in January.

He said exemptions were in place for a reason, but that unvaccinated travellers would still be required to quarantine for two weeks. 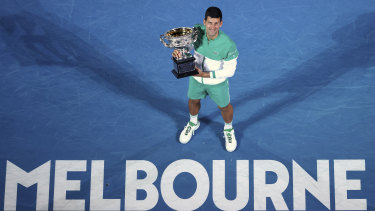 “If there is a special exemption that is warranted for an economic reason … that can happen, but you have to follow the health rules in that state,” he told Nine’s Today show.

“Two weeks quarantine for unvaccinated people, that is sensible.

“It is nice to have, you know, all clear and hard-and-fast rules, but there needs to be a little bit of flexibility so we can live with the virus.

“We want major events in this country. A lot of jobs depend on it.”

“We’ll have to consider what the Prime Minister said and I’ll consult with my public health team and I’m sure we’ll have more to say.”

The political argy-bargy continued throughout the morning, with federal Health Minister Greg Hunt backing the Prime Minister’s view that two weeks’ quarantine should suffice. But Mr Hunt then lobbed the ball back into Victoria’s court.

“In terms of the tennis, pretty simple position, and that is: you can come in if you are double vaccinated,” Mr Hunt says.

“If a state is seeking an exemption for somebody to come in for a workplace program or a similar event and they are unvaccinated, they can come in if that state seeks it. They are subject, however, to the two weeks quarantine, and that’s without fear or favour.

Victoria’s Chief Health Officer Brett Sutton said on Tuesday he believed the risk of unvaccinated players could be adequately managed through the quarantine system. Tennis Australia is also working feverishly to present multiple models to government on how this issue can be smoothed out.