Don’t blame the dogs if they look a little confused: The Westminster Kennel Club Dog Show looks a lot different this year.

After the show was moved to a new date and location because of the coronavirus pandemic, dogs (and their humans) who in other years would have spent months preparing to compete under the bright lights of Madison Square Garden in February have found themselves outdoors and under tents in June. No outside spectators are allowed.

But the new surroundings are as spectacular as a Saluki and as regal as a Cavalier King Charles spaniel: For the first time, Westminster is being held at Lyndhurst, the Gothic Revival mansion and estate in Tarrytown, N.Y., once owned by the robber baron Jay Gould.

So take in the scenery and the setters, even if it must be from afar this year. And join us on Sunday night for more photos, and live “analysis,” during the prime-time finale. 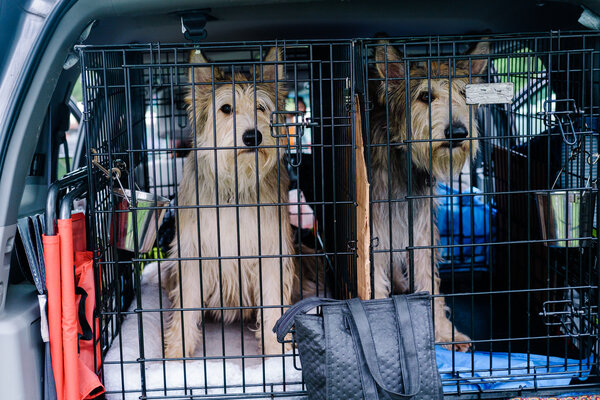 “Wait — you said we were going outside this year.”

“Please rise for the national anthem” means everyone, buddy.

This dog has wow factor. No, seriously, her registered name is Incantodelmondo Wow Factor.

Evan Catterson, 12, and Dime, a Brussels griffon, in the Junior Showmanship competition. First prize is a $10,000 scholarship.

At left: Twitch, a keeshond, posing for a portrait.

All this outdoor competition is exhausting. We need a tent break.

Bunny the greyhound ditched the hat for judging.

Song the greyhound won best of breed on Saturday, advancing to the finals for the hound group.

On Saturday night, the first four group winners were to be chosen. The other three group winners will be selected Sunday, and then all seven will compete for Best in Show in the show’s prime-time finale.