There’s a bit of aquatic confusion at the Olympics, where two of the disciplines are referred to by conflicting names.

Russia’s Svetlana Romashina, who set a record with her sixth gold medal in synchro — uhh, make that artistic swimming — noted the confusion that still prevails four years after world governing body FINA pushed through a name change in her sport. 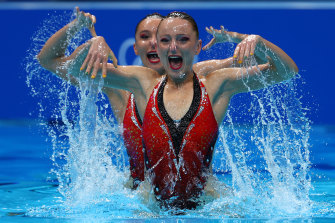 “Of course, in the world, we call it artistic swimming,” Romashina said after claiming her record-setting sixth career gold medal in the duet competition. “But I can say that in our country, our federation, it is still synchronised swimming.”

The sport formerly known as synchronised swimming has been an official part of the Olympics since the 1984 Los Angeles Games, but it still fights an ongoing battle to be taken seriously. 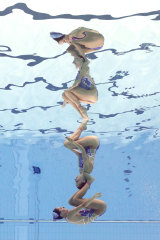 Australians Emily Rogers and Amie Thompson compete in the artistic swimming duet technical routine in Tokyo on Tuesday. Much of their time is spent under water and holding their breath.Credit:Getty Images

Martin Short hilariously mocked synchro in a 1980s skit on Saturday Night Live — he wore a life jacket while conceding “I’m not that strong a swimmer” — and many still view the sport as nothing but thick globs of hair gel, elaborate suits and over-the-top deckwork.

In an attempt to bolster the sport’s popularity and expand its appeal to potential sponsors and television partners, FINA changed the name to artistic swimming after the 2016 Rio de Janeiro Olympics.

Many athletes objected to the new moniker. They believe it actually demeans the amazing skills of those who perform precise, gruelling moves — often while upside down and holding their breath — by rekindling the sport’s origins as water ballet, which was more show than competition.

But the change seems to be gaining grudging acceptance.

Last year, USA Synchronised Swimming or USA Synchro for short officially changed its name to USA Artistic Swimming. And now we have the first Olympics with artistic swimming, not synchro.

“The name change offers us an opportunity to showcase how the sport has evolved,” USA Artistic Swimming executive director Adam Andrasko said when the organisation announced its name change. “Gone are the days of water ballet. This is where true athleticism and artistry meet.”

No matter the name, Romashina said it’s important to showcase what an amazing sport it is.

“It is not a big difference,” she said. “The best thing that we can do is love synchro, love artistic swimming, and try to show people that it’s beautiful.”

Officially, there’s marathon swimming (that was a pair of 10-kilometre races at Tokyo Bay for men and women – Kareena Lee won a bronze for Australia) and artistic swimming (that’s the women-only event in which duets and teams perform intricate, synchronised routines accompanied by dramatic music at the Olympic pool).

Try telling that to those who actually compete.

Open water remains the go-to name for long-distance swimming races held in oceans, rivers and lakes, but that’s not what it’s called at the Olympics. 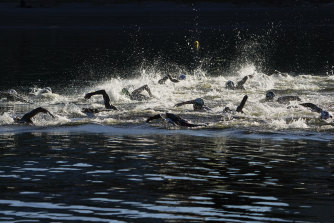 Swimmers compete during the men’s marathon swimming event in Tokyo on Thursday.Credit:AP

Since the 10k was added to the program at the 2008 Beijing Games, it has been known officially as the marathon.

That seems appropriate for what is by far the most gruelling swimming race — nearly seven times the distance of the longest pool event, the 1500-metre freestyle, with random factors such as the weather and marine life often playing a huge factor. But that in itself is a misnomer given a marathon, strictly speaking, is a running, not swimming, race of exactly 42.195km, not 10km.

But nearly all the swimmers who competed this week in Tokyo referred to the sport by its best-known name.

“I always call it open water,” said Ashley Twichell of the US, who finished seventh in the women’s marathon after leading a good chunk of the race.

“It’s just what I kind of knew,” she added. “When I first entered the sport, I just considered it open water. That’s what I was told it was.”

In the end, that’s not a major concern to those who compete.

Australia competes in the artistic swimming technical routine on Friday at 8:30pm. The final of the team free routine is on Saturday at 8:30pm AEST.

Opinion: Tyson Fury the latest Brit to make a mockery of American boxing after TKO of Deontay Wilder