US track and field athlete Gwen Berry, 32, is a long-established hammer and weight thrower who has become better known of late for her pointed political protests and the controversy they have attracted.

Most recently, during trial events for this year’s Tokyo Olympics in Eugene, Oregon, on 28 June, she caused uproar by turning away from the American flag as “The Star-Spangled Banner” played, leading opportunistic Texas Republican politicians Ted Cruz and Dan Crenshaw to deride her and call for Berry to be removed from Team USA as punishment for her apparent lack of patriotism.

While fellow athletes DeAnne Price and Brooke Andersen faced the flag with their hands on their hearts, as is customary, Berry had turned away as a protest against systemic racism in the US.

“I feel like it was a set-up, and they did it on purpose,” she said afterwards, implying the song had been played in the stadium to force her into compliance. “I was p***ed, to be honest. They had enough opportunities to play the national anthem before we got up there.”

“I was thinking about what I should do. Eventually I stayed there and I swayed, I put my shirt over my head.” 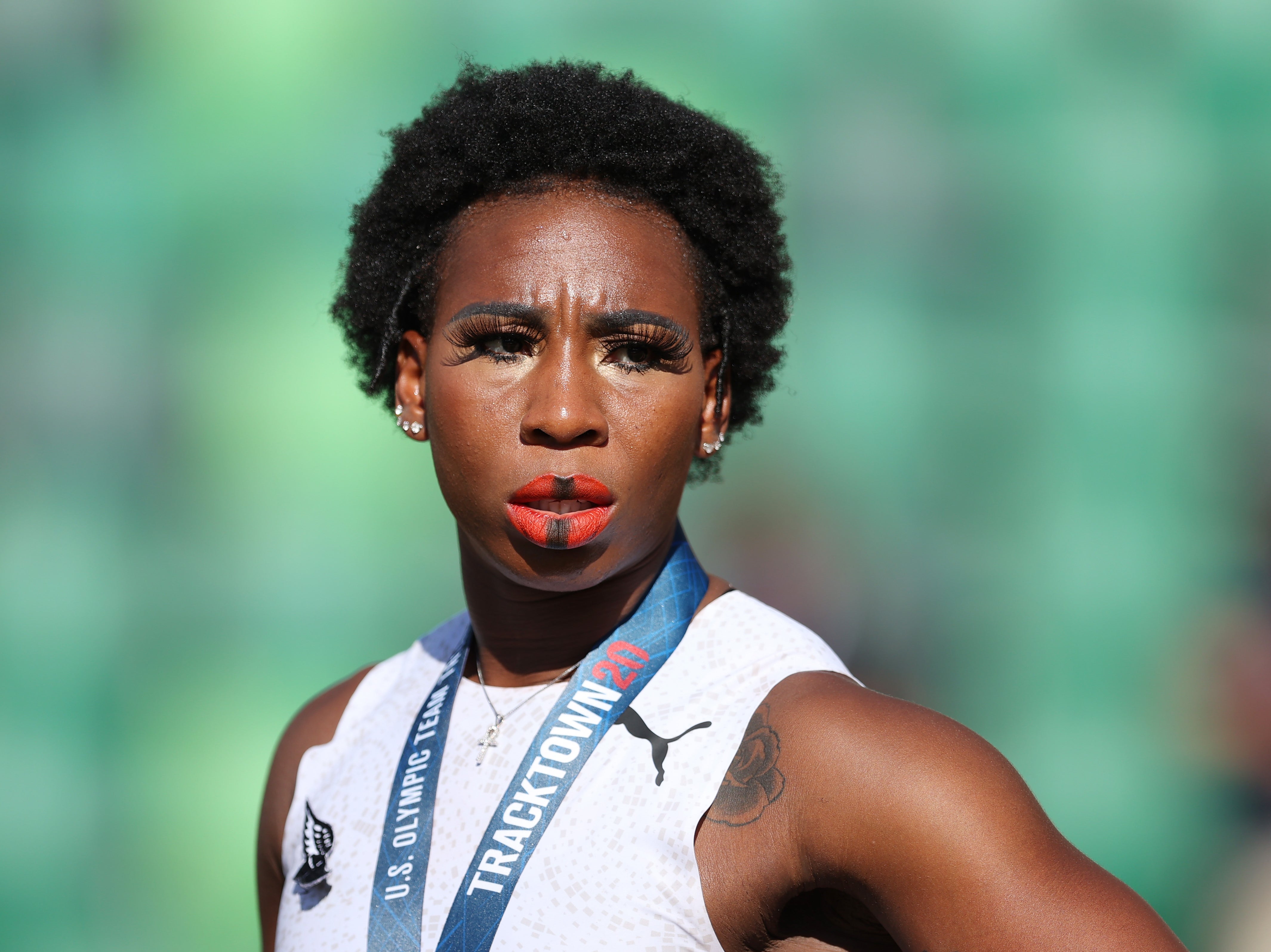 USA Track and Field subsequently denied her accusation, saying the anthem was played in accordance with “a previously published schedule”, but the incident created a furore.

Responding to the hostile reaction, Berry wrote on Twitter: “These comments really show that: 1.) People in American rally patriotism over basic morality. 2.) Even after the murder of George Floyd and so many others; the commercials, statements, and phony sentiments regarding black lives were just a hoax.”

She had previously drawn ire at the 2019 Pan American Games in Lima, Peru, when she won gold for the hammer throw and raised her fist in the air during the same anthem in opposition to social injustice “and a president who’s making it worse”, a reference to Donald Trump.

That protest saw her reprimanded by the International Olympic Committee, who placed her on probation for 12 months, and cost her tens of thousands of dollars in lost sponsorship deals.

Gwen Berry was born in St Louis, Missouri, on 29 June 1989 and played basketball while a student at McCluer High School in Florissant before shifting her focus towards track and field.

She subsequently took a degree in psychology and criminal justice at Southern Illinois University Carbondale in 2007, where she picked up throwing events as part of the Salukis collegiate team and came fourth in the hammer throw at the 2008 USA Junior Championships. Gwen Berry turns away from US flag during the national anthem on day nine of the 2020 US Olympic Track & Field Team Trials in Eugene, Oregon

Her international debut for the US arrived at the 2010 NACAC Under-23 Championships in Athletics in Miramar, Florida, where she took the hammer bronze, an achievement that she surpassed at the Pan American Sports Festival in Mexico City in 2014, when she won gold in the same discipline by beating her own former idol, three-time world champion Yipsi Moreno of Cuba.

She has subsequently competed at the Rio Olympics in 2016 and the World Championships in London in 2017 but it was not until two years ago in Lima that she added to her medals tally – although she did record the sixth-furthest women’s hammer throw of all time in June 2018 in competition in Chorzow, Poland, tossing 77.78 metres.

Berry will no doubt be looking to use the recent criticism she has been subjected to regarding her activism as inspiration when she takes to the field in the Japanese capital this summer.

Who is Tiger Woods' girlfriend Erica Herman? How long has US Open 2019 star been dating the restaurant manager?