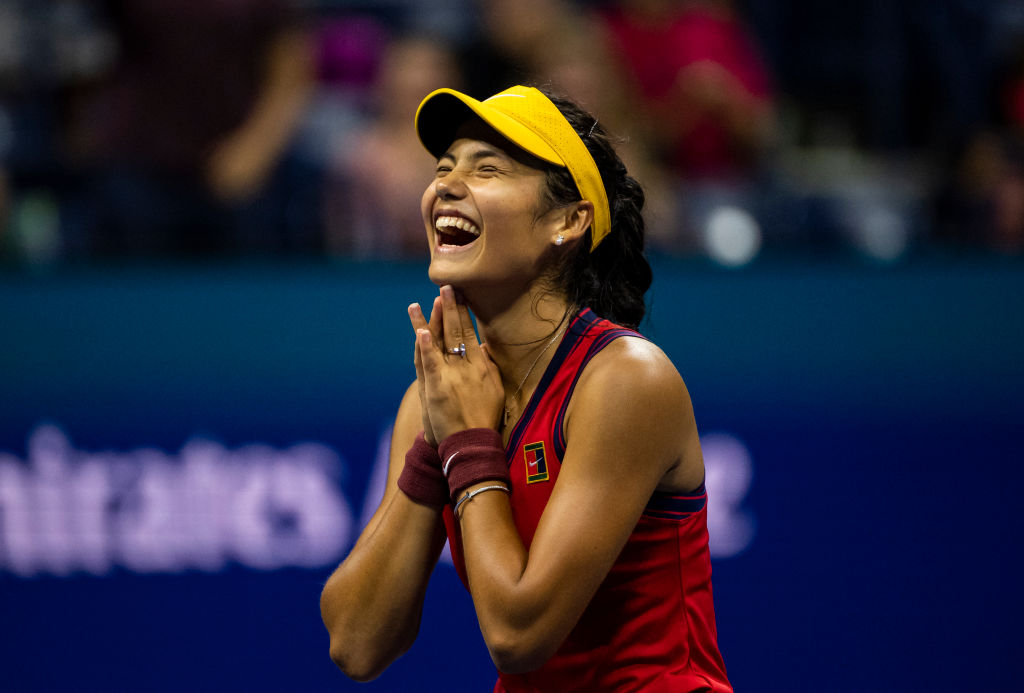 Emma Raducanu is the talk of the town and considering that town is New York, that’s quite a statement.

She stepped on court in the qualifying draw as a total unknown to the American audience, yet now they cheer her even against one of their own.

That was Shelby Rogers in round four and even in the last eight you might have thought New Yorkers would back Olympic champion Belinda Bencic, who is after all a former US Open semi-finalist, but it was Raducanu who got the cheers.

So why’s that? It’s because she has got two things Americans love. Firstly, she is an enthusiast, she looks like she’s having a great time and isn’t afraid to show it. And also, she’s a winner – you can see that from over the horizon.

Commercially this woman is off the charts. Witness the selfies she happily takes at courtside with all and sundry. Behind her the faces of the modern world beam with delight. Every age, sex and nationality seems represented and all of them loving Emma.

This is a rare thing we are watching. Raducanu is busy winning tennis matches and adjusting to a new life as a professional athlete but when she stops to take a breath she’s going to need a brand new pen to sign all the contracts waiting for her.

I can’t imagine a global brand that won’t want to be associated with her. No one in the draw was able to get anywhere near Raducanu on her way to the final, no one managed to take a set off her in nine matches, and while she hasn’t played the very best in the world, that’s not a criticism. You can only beat what’s in front of you.

The hardest adjustment Raducanu will have to make from now on will centre around her personal life. Global fame she may be able to take in her stride but her friends may not find that so easy. Who to trust, judging people’s motives, dealing with the press and all the attention that goes with it are as much as a challenge as hitting a tennis ball.

In fact she will likely gain greater peace on court than off it in the coming months but she looks well able to withstand this storm, and that’s credit to her mum and dad Renee and Ian.

There will be times, though, when she may not be happy or smiling or winning and that’s when we must all be generous in our judgements.

We have all seen and heard the accounts of Naomi Osaka and Simone Biles to name but two athletes who have struggled with the challenges of their life.

That’s all for the future and to her great credit Raducanu has sailed through every examination she has faced from being a top professional tennis player to taking her A-levels early. She is having the time of her life and it is very cool watching her break out into the world.

During Raducanu’s success in the States, meanwhile, I’ve often thought of the man who was alongside her during her explosive run to round four at Wimbledon. Nigel Sears was working with Emma and no doubt expecting that relationship to continue as she aimed at the big time.

But just days after the event he was told she would be working with someone else. Nigel is a big boy and has been around the game a long time but it must have been a bitter pill to swallow. He was replaced by Andrew Richardson, who coached Emma when she was younger. Andrew is never one to grab the limelight but has a solid presence and knows his stuff. He may be a little shy so you won’t hear much from him but I can tell you he can stick the boot in when he needs to, notably as Tim Henman’s best man – although he could have been much ruder!

Novak under the radar as he chases history

I don’t feel sorry for Novak Djokovic in any way, shape or form but he must wonder what he has got to do to get a headline.

He is on the cusp of one of the greatest sporting achievements of all time and yet most people are talking about teenage girls.

Djokovic is two matches away from holding all four major championships simultaneously and this has not been done by a male player since the Rockhampton Rocket, Rod Laver, in 1969. In those days there were far fewer full-tine players and tennis was far less international than now. Furthermore three of the grand slams were on grass and that suited Mr Laver just fine.

Djokovic, who has been world No.1 for 377 weeks, is trying to break a tie with the magical duo of Roger Federer and Rafa Nadal on 20 slams apiece and he is the red-hot favourite for me. You can’t bet against the Serbian but to win the tournament he still has to beat Sascha Zverev, the recent Olympic champion who beat him in Tokyo, and probably Daniil Medvedev, who I think is going to win multiple grand slams on hard courts.

That’s a combined 13ft of hungry Russian-parented tennis superstars, neither of whom have won a tournament that would entitle them to be called great.

Number of NFL players in vaccination process up to 80%