As each competitor in the men’s long jump final stood at the top of the runway, staring with murderous intent at the sandpit 40 metres away, my silly little brain kept going back to Radiohead’s 1990s classic, if not slightly morbid, Fake Plastic Trees.

He used to do surgery. For girls in the eighties. But gravity always wins …

Not for one moment am I suggesting any of the last 12 men standing in the final have had a sneaky nip and tuck, but just as gravity is the nemesis of the McDonald’s pickle thrown against the window, so it is with the Olympic long jumper.

They have such high hopes, tearing in with Lillee-esque ferocity, plonking down the front foot before leaping high into the air.

For a few seconds, they’re flying first class but then the gravitational pull of the Earth tells them to return their seat to the upright position and stow the tray table for landing, and they eventually collapse into the dark, wet sand, ankles buckling beneath them before frantically turning around to see if they’ve received the white flag, which indicates a legal jump.

With this in mind, why do so many long jumpers feel compelled to wear so much bling?

Indeed, why do so many track and field athletes, male or female, handicap themselves with an unnecessary array of heavy jewellery, long acrylic nails and eyelash extensions?

I saw one sprinter over the weekend wearing a Wonder Woman-like headband. That’s not helping anyone achieve a PB.

In my expert opinion, it was bling that determined who took home the most important bling of them all in the men’s long jump.

Cuba’s Juan Miguel Echevarria took his place at the top of his run and, if you didn’t know any better, you would’ve thought he’d just done a shoot for the latest Goldmark catalogue. 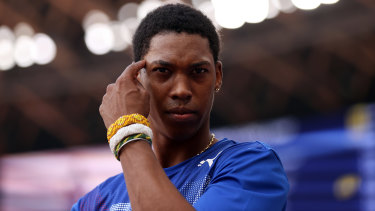 All on the wrist … Cuba’s Juan Miguel Echevarria.Credit:Getty

Anchored down with gold chains, earrings, bracelets, rings, he completely duffed his fourth attempt, twinging his right hamstring at the same time. Coincidence? I don’t think so.

Next up was Team USA’s JuVaughn Harrison, whose mere presence in this event made him the first from his country since Jim Thorpe in 1912 to compete in both the high and long jumps. 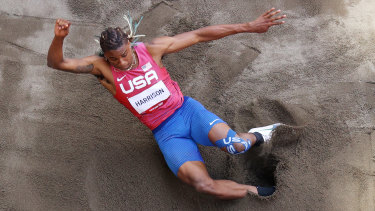 The start of his attempt was similar to the high jump the evening before when he finished seventh. He leaned back, like he was standing to close to someone with garlic breath, narrowed his gaze and then launched.

His jump of 8.15m put him into bronze medal position but you couldn’t help but wonder what might have been without 20kgs of excess baggage.

Nobody was wearing chunky chain necklaces at Urunga Primary School sports carnivals in the early 1980s, let me give you the tip.

You’d be lucky if they let you wear a plastic Casio watch as you launched off a decaying piece of driftwood dug into the grass before landing in a pit of sand so coarse it may as well have been broken glass.

If you got out of there without a broken Cowrie shell piercing the skin you felt like a winner, which you never were, because gravity always won against kids who drank too many Chocolate Mooves from the canteen.

Those watching on Seven didn’t get to see the conclusion to the men’s long jump final because they switched to the final of the women’s 100m hurdles.

Because this final was being held in the daytime, Tokyo organisers couldn’t put on the extravagant light show of the previous two nights for the 100m finals.

Instead, athletes entered individually, like they were stepping onto the set of a talk show.

“What a great entrance!” Tamsyn Manou said in commentary of Jamaican firecracker Megan Tapper who enthusiastically bounded into the arena before bounding into third place behind Puerto Rico’s Jasmine Camacho-Quinn, who was a popular winner after falling in the semi-final in Rio. 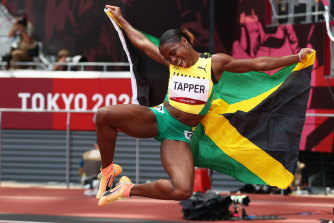 Tapper dance … Megan Tapper of Jamaica after winning bronze in the 100m hurdles.Credit:Getty

As she did her lap of honour, the men’s long jump was finishing up, with Greece’s Miltiadis Tentoglou snatching victory with a final jump of 8.41m, which equalled Echevarria’s third attempt.

Tentoglou won on a countback, which is a rotten way to separate first and second at an Olympics, but it must be said he wasn’t wearing a single piece of bling until the very end, when he was on the dais, with a gold medal dangling from his neck.

Coincidence? I don’t think so. 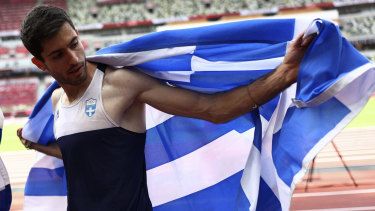 The quote
“Can we have two golds?” — Qatar’s Mutaz Essa Barshim asks an official if he can share first place with Italian Gianmarco Tamberi in the men’s high jump. When they found out they could share, they leapt into each other’s arms … I seem to have something in my eye.

Thumbs down
The Hockeyroos were undefeated in five matches heading into their quarter-final against India … then lost 1-0 despite peppering the opposition’s goal late in the match. Heartbreaking scenes.

It’s a big day 11 at the Games for …
Australian gymnast Tyson Bull, who lines up in the final of horizontal bars at the Ariake Gymnastics Centre after recording a personal best in the preliminary round. His nickname is “Tys”. We’re coming up with a better one than that if he medals.

It’s an even bigger day 11 at the Games for …
The Australian pairing of Mariafe Artacho de Solar and Taliqua Clancy, who meet the world champion pairing from Canada in the quarters of the women’s beach volleyball.

Floyd Mayweather 'carried' McGregor in their fight and won in round ten just as he predicted he would, reveals Broner