NEW ORLEANS — The New Orleans Pelicans have scuffled along for years as one of the N.B.A.’s worker-bee franchises, a respectable team but not one that has vied for championships. They lose as often as they win and play their home games in an arena called the Smoothie King Center, where a big-beaked mascot named Pierre roams the crowd.

But in recent seasons, the team has employed someone even more special: Anthony Davis, a gifted center and one of the best players in the league. Davis has a pterodactyl-length wingspan and a unibrow, which has become as much a part of his persona as his skyscraping dunks. Fans know him as “The Brow,” as if he were a superhero who draws strength from his facial hair.

New Orleans used to love him for it — until two weeks ago, when he shook the league and asked the Pelicans to trade him. The Pelicans, in return, made a bold move of their own: They refused to let him go, at least not yet.

Now Davis and New Orleans are stuck together in basketball purgatory — “It definitely is different,” said Jrue Holiday, the team’s starting point guard — and the city’s long-suffering sports fans can only wonder: What do we do now?

“It’s not a new thing that guys demand to be traded,” Alvin Gentry, the Pelicans coach, said in an interview, “but I thought the timing of it kind of put everybody in a tough situation.”

It has been a soul-crushing few weeks for sports fans here. They absorbed a major blow last month when the New Orleans Saints, who are as much a tent revival as football team, lost to the Los Angeles Rams in the N.F.L. playoffs after a missed call by the referees, which may have cost the Saints a trip to the Super Bowl.

A week later, Davis’s agent, Rich Paul, announced publicly that Davis wanted out of New Orleans and would not sign a contract extension.

“Now that he’s going to leave, I’m excited to see what we can get for him,” said Ryan Bergeron, a 22-year-old legal assistant from New Orleans who is a regular at Pelicans games. Like many fans, Bergeron owns one of Davis’s replica jerseys — which he plans to keep in the back of his closet.

“I think we’ll be better off without him,” Bergeron said.

Not so long ago, Davis was throwing beads from a float as an honorary grand marshal at a Mardi Gras parade. But the city’s feelings toward him have curdled like week-old étouffée.

On Friday night, when Davis played in his first home game for the Pelicans since his trade request, images of him were cut from a highlight package that played on the arena’s oversize video screens. The crowd showered him with boos that drowned out scattered cheers. As if to amplify his value while sticking it to those who expressed their displeasure, Davis collected 32 points and 9 rebounds.

“It’s life, man,” Davis said of his frosty reception. “Some people aren’t going to like you.”

New Orleans has dealt with its share of hardwood hardship. Franchises have come and gone, along with star players. The New Orleans Buccaneers were a charter member of the American Basketball Association from 1967 to 1970, but then relocated to Memphis. The New Orleans Jazz, founded as an N.B.A. expansion franchise in 1974, had a similarly abbreviated run before decamping for Utah in 1979. 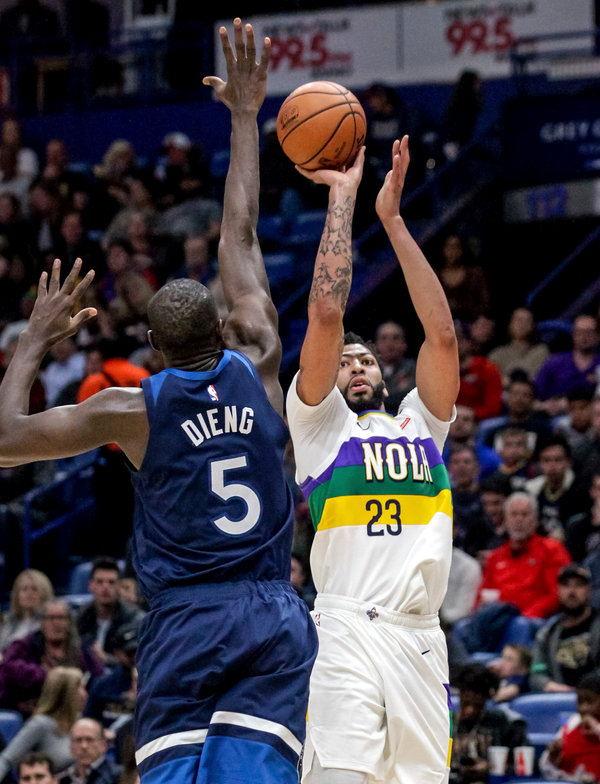 The N.B.A. returned to New Orleans in 2002 — back when the team was known as the Hornets — and eventually found a franchise star in point guard Chris Paul, who led the team to three playoff appearances before he, too, told management before the start of the 2011-12 season that he would not sign a contract extension. New Orleans traded him to the Los Angeles Clippers, then finished with the worst record in the Western Conference.

But from the rubble of player discontent sprang fresh life in 2012: Tom Benson, then the owner of the Saints, bought the franchise, and the team, soon to be rebranded as the Pelicans, secured the top pick in the draft. (After Benson died last year, the ownership of both franchises was transferred to his wife, Gayle.) New Orleans used that pick on Davis, a freshman center who had just led Kentucky to an N.C.A.A. championship.

Now in his seventh season, Davis is a six-time All-Star who was averaging 29 points and 13.3 rebounds entering Monday. But he has been prone to injury, and he has never led the Pelicans on a deep playoff run. The organization has made missteps — Exhibit A: re-signing Omer Asik, a Turkish forward, to a $58 million deal in 2015 — but that does not make them unique among N.B.A. teams; they are trying to compete in one of the league’s smallest markets when stars are generally gravitating toward flashier and more well-established franchises.

Last season, the Pelicans were playing well behind Davis and DeMarcus Cousins, a perennial All-Star whom the team had acquired through a trade in 2017. But Cousins tore his Achilles’ tendon and missed the playoffs. Without him, the Pelicans still swept the Portland Trail Blazers in their first-round series before losing to the Golden State Warriors in the conference semifinals.

Still another problem was brewing for the Pelicans. In September, Davis changed agents and hired Paul, who is known for his close relationship with LeBron James, the Los Angeles Lakers’ star forward.

Paul’s tactics with the Pelicans in recent weeks in pursuit of a trade for Davis were unconventional. Tom Penn, a former executive with the Trail Blazers and an analyst for NBA TV, said in a telephone interview that most agents try to work with team executives behind the scenes. Paul, on the other hand, “threw a Molotov cocktail in the middle of the room,” Penn said.

It became a public spectacle, and the Pelicans responded by releasing a statement in which they said they would do a deal “on our own terms and our own timeline.” Sure enough, they rebuffed the Lakers — one of Davis’s preferred trade destinations — in their attempts to pry Davis loose.

Once Thursday’s trade deadline passed, the Pelicans landed a final jab by tweeting an emoji of an hourglass that had run out.

Aside from avoiding the public-relations pitfalls of being stuck with a star who no longer wants to be there, the Pelicans had little incentive to make a deal ahead of the trade deadline. More teams will be better positioned to make offers for Davis in the off-season, and the Pelicans’ haul in exchange for him could be huge.

New Orleans also showed some pluck. At a time when some players are seizing greater power to determine the arc of their careers, the Pelicans decided that they would trade Davis when they are ready.

Now, with Davis tethered to them for the remainder of the season — he is a lottery ticket they will wait to cash — the Pelicans are searching for a way forward.

“What we’re trying to do is get back to normal,” said Gentry, the team’s coach, “and what our new normal is — we haven’t quite figured it out yet.”