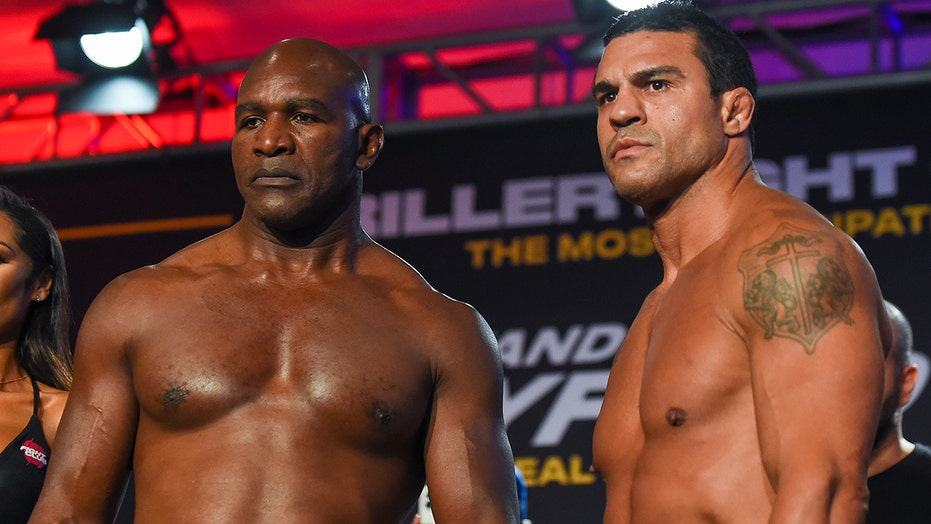 Belfort nailed Holyfield with a brutal uppercut and the legendary boxer fell backward. The referee stopped the fight and awarded Belfort the victory.

Holyfield came into the fight at the last minute when Oscar De La Hoya was forced out of the bout when he contracted the coronavirus. Belfort had been preparing for De La Hoya but didn’t appear to be fazed by Holyfield’s presence. He thanked the Holyfield team for “stepping up” in the “Golden Boy’s” place.

Holyfield said after the fight he didn’t agree the fight should’ve been stopped so quickly.

Rapper 50 Cent, who was on the main broadcast, asked Holyfield if he would be interested in fighting Mike Tyson next.

“Of course, I would,” Holyfield said.

It’s unclear what the next step was for Holyfield.

Belfort called out Jake Paul in his post-fight match. And a $30 million winner-take-all offer was made to Paul to fight Belfort on the broadcast.

Trump appeared on a separate alternative commentary for the Triller-hosted event. He was in the booth along with Donald Trump Jr., UFC star Jorge Masvidal and others.

In-ring announcer Michael Buffer recognized the president before the signing of the U.S. national anthem. He was met with plenty of cheers.

Before the fight at the Seminole Hard Rock Casino & Hotel, there was a moment of silence for the victims of the 9/11 terror attacks.

As the fight ended, Masvidal mentioned the potential of fighting one of the Paul brothers. Trump appeared to be in support of it.

“I think it would be an incredible fight,” Trump said.

Trump was in New York City to honor the first responders on the anniversary of the 9/11 attacks. The former president, a New York native, spoke briefly about the Sept. 11, 2001, attack on the World Trade Center, the recent Afghanistan withdrawal and took questions from the police officers.

Trump called the 20th anniversary of 9/11 a “very sad day for a lot of reasons,” referring to both the attack and the botched withdrawal of U.S. troops from Afghanistan in recent weeks, and praised the brave NYPD officers.

Best SEC college football bets: The numbers our experts like most