HOUSTON — In a young season already defined by injuries, the Yankees have sent their best pitcher for further tests on his throwing shoulder after his rehabilitation efforts stalled.

Luis Severino, 25, the staff ace, has not been able to throw off a mound as he tries to recover from rotator cuff inflammation in his right shoulder.

After he did long tosses on flat ground at the team’s spring training facility in Tampa, Fla., over the weekend, Severino “didn’t feel as great” as he had after recent tosses, Yankees Manager Aaron Boone said Monday night, before the team’s 4-3 loss to the Houston Astros.

Severino was sent to New York to be evaluated by Christopher Ahmad, the team’s head doctor. Boone said Severino was expected to have a magnetic resonance imaging examination on Tuesday, and perhaps other tests.

Boone said Severino’s shoulder felt “O.K., but just not where he wants to be.” And the Yankees (5-5) are unsure why the pitcher’s shoulder hasn’t felt ready for him to get on a mound, the next step in the throwing program. Severino last threw from 130 feet on flat ground.

“I’m hoping it’s just him not able to get over the hump quite yet,” Boone said.

“The original testing that we did with him led us to be pretty confident,” he added. “But we’ve got to make sure he’s right. The fact that he hasn’t graduated from the flat ground throwing yet to the mound, we’ve got to try and answer those questions as best we can.”

Severino is one of the Yankees’ major-league-leading 11 players on the injured list. The Yankees have nearly $87 million in 2019 salaries on the I.L., which includes stars like outfielder Giancarlo Stanton and reliever Dellin Betances and standouts such as outfielder Aaron Hicks and starter pitcher C. C. Sabathia, who is expected to return this weekend. 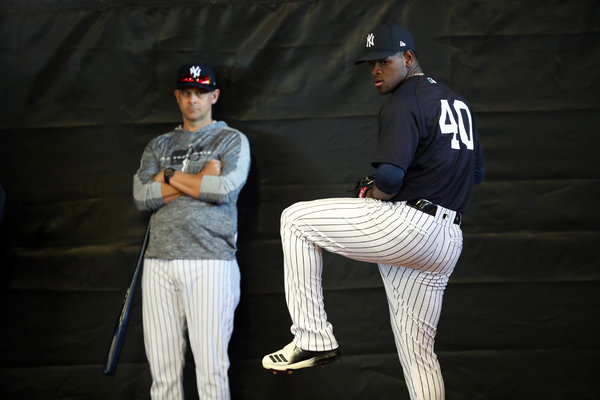 Before this, Severino had not been on the I.L. since May 2016, when he had a strained right triceps.

Severino has been out since March 5, when he was scratched from his first spring training start because of discomfort in his throwing shoulder. An M.R.I. exam then revealed only rotator cuff inflammation, according to the Yankees, and Severino received a prescription for an injection, anti-inflammatory medication and rest.

In order to complete a four-year $40 million contract extension in February, Severino passed a physical, which included an M.R.I. exam.

Severino originally was not expected back from the injury until sometime in May. Until the latest tests are done, it will be unclear whether that estimate will change.

The Yankees can ill afford to lose Severino, a two-time All-Star and one of the best starters in the American League, for a significant period of time. But the rotation has managed without him so far.

With solid pitching from Masahiro Tanaka and James Paxton, plus the fill-ins Domingo German and Jonathan Loaisiga, the Yankees’ rotation entered Monday with a 3.09 earned run average, ranking eighth in the majors.

Tanaka fired six strong innings on Monday, allowing one run on a homer by Houston’s Jose Altuve. The Yankees took a 3-1 lead into the seventh inning, partly because of a solo homer that Aaron Judge hit off Justin Verlander in the fifth.

But relievers Zack Britton and Adam Ottavino, neither of whom had been scored upon this season, allowed a combined three runs. A cueball infield single by Carlos Correa that went between Ottavino and first baseman Greg Bird in the eighth inning brought Alex Bregman home, giving the Astros the winning margin.

Jonnie Peacock: Landing a third Games title will be my toughest test yet