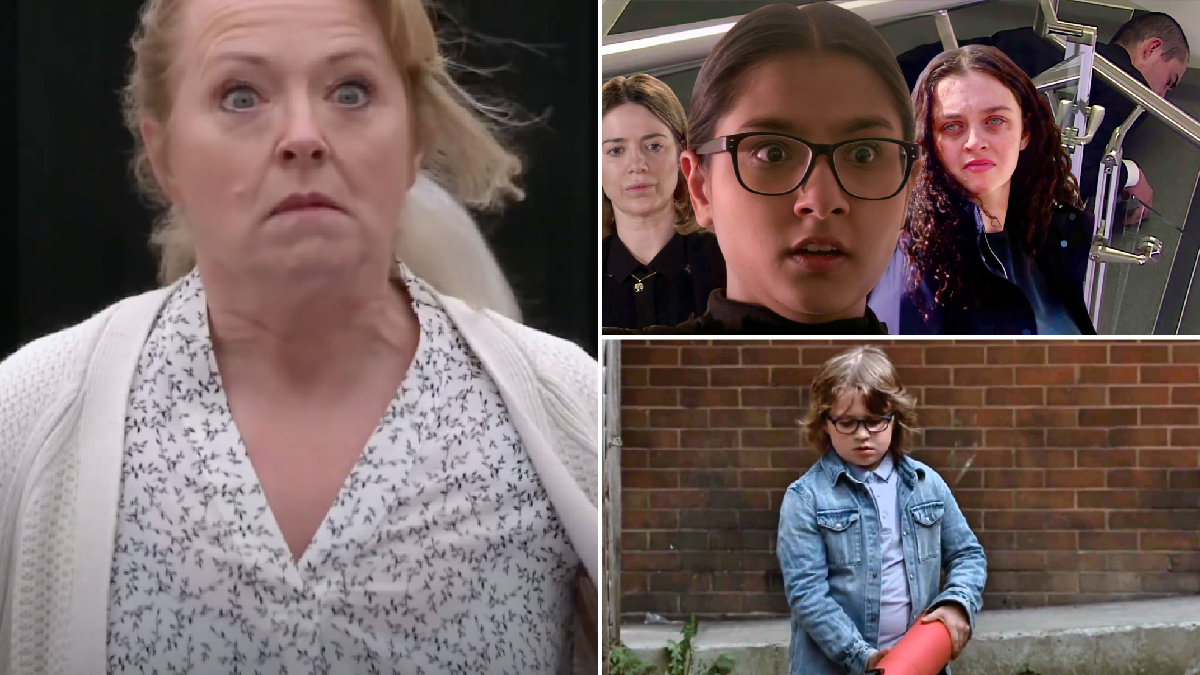 The emergency services should get danger money when calls come in from Coronation Street.

In the last five days alone we’ve had a tasering, a shooting and a nearly fatal fall down a flight of stairs.

Is it any wonder that the majority of 999 calls in the Greater Manchester area come from that one crime-ridden backstreet?

If you missed any of the action, here’s a rundown and review of all that went down during a tumultuous week in Weatherfield:

Let’s (not) get physical

Throwing punches is difficult to do when actors are socially distanced, but Corrie this week found several ways to stage high-stakes showdowns despite there being a lack of any fistfights.

First, we had Sharon using a taser to floor Jenny (‘’ave it!’), then we had a resigned Johnny deciding not to roughhouse Ronnie (‘I’m not laying anybody out’) and finally there was the war of words between Carla and Sarah.

This latter one relied on one of Corrie’s main selling points: the stinging verbal assault.

It’s always much more entertaining to see characters trading insults rather than physical blows and Sarah felt like the winner here when she said of Peter and his failing liver: ‘What do we do with the drunken sailor? Who cares!’ A battleship-sinking torpedo if ever there was one.

Sharon’s true intentions were revealed – and it was her obsession with Leanne that proved to be her undoing. For weeks now, she’s been bringing the errant Ms Battersby into every conversation, to the point where someone could be commenting on the nice weather and Sharon would no doubt feel compelled to reply: “Yes, but is it nice where Leanne is? Perhaps we should ring her and find out…”

In the end, it all came down (as we knew it would) to a confrontation with a newly sports-massaged Rita. “I’m not Mary Poppins,” admitted Sharon. No, lady, but you’ve definitely been taking tips from the Child Catcher in Chitty Chitty Bang Bang.

The rehabilitation of Gary Windass

OK, so he once murdered loan shark Rick Neelan. And, yes, he did sabotage the factory roof so that it fell in and killed Rana Habeeb. But that Gary Windass isn’t really such a bad lad, right? I get the impression that this is the message Corrie writers are trying to get across, what with the Street’s resident Peaky Blinder being rehabilitated before our eyes.

First of all, he finds some vital info on Sharon for Jenny (he basically just looked on Facebook) and now he’s rescued Rita and faced-off against drug lord Harvey’s gun-toting henchman Robbie. Gary’s also something of a miracle worker: at one point, he emerged from Costa brandishing a branded coffee and, two minutes later, he somehow had two plain cups from Roy’s Rolls in his hand.

It’s no wonder that Maria is impressed. Mind you, she’s someone who’s never happy unless she’s dating a fella with a photo album full of police mugshots.

If Home Alone was ever rebooted, I’d like to see little Jude Riordan take on the role of Kevin. He’s got the same wise-before-his-years attitude of a young Macaulay Culkin and, as Sam, has also demonstrated similar levels of resourcefulness.

A mere week after surviving a night locked in a van with just a wind-up radio for company, Sam was once again showing how creative he can be in a crisis when he incapacitated Robbie, who was holding Gary at gunpoint at the time. Granted, it wasn’t the correct use of a telescope case, but it certainly left Robbie seeing stars.

We didn’t get to see Seb’s actual funeral, but points to Corrie for picking a naturally posed picture of him to sit on top of the coffin. Usually, it’s a framed official cast photo of the type that you get each week on the cover of the TV listings mags.

But one thing that definitely felt overly familiar was the sight of the bereaved – in this case, Abi – crying their eyes out in Victoria Gardens. Has anyone ever cracked a smile while sitting in there? There’s certainly no need to ever water any of the plants, as they’re always saturated with tears.

The fall of Corey

There’s a reason why characters in soapland don’t live in bungalows. Just think about it. If they were all in single-storey accommodation, there’d be no stairs for them to fall down. And, let’s face it, Corrie is forever sending people down steep flights at speed.

The latest to trip headfirst was Corey, who took a tumble after Asha drugged his drink. ‘Everybody dies eventually, but some deserve it more than others,’ said Nina as she, Abi and Asha debated whether to call for help.

In the end, they did opt to save Corey. But I’d have been tempted to just manoeuvre his body in front of the entrance to Victoria Court and leave him there. He’s a reprehensible human being but he might have made a halfway decent draught excluder.