AJ Pritchard’s girlfriend Abbie Quinnen, 23, suffered third-degree burns while filming for a YouTube video which ended up going horribly wrong. The professional dancers were attempting the latest trend of turning a wine bottle into a vase when Abbie’s hair and clothes caught alight. After AJ called 999, Abbie was transferred to Ealing Hospital before being taken to the burns unit in Chelsea. After a number of skin grafts, Abbie’s scarring has dramatically improved, although, she has since admitted that she feared her face would never be the same.

During Tuesday’s Lorraine, Abbie made her first TV appearance since the accident alongside her boyfriend AJ.

Abbie began by explaining to the host how the horrific accident unfolded.

She said they were attempting a new online trend by dipping rope into a flammable chemical, before wrapping it around a bottle and setting it alight.

However, the glass exploded during the dangerous stunt and engulfed Abbie’s upper body in flames, before she was rushed to hospital after suffering the accident. 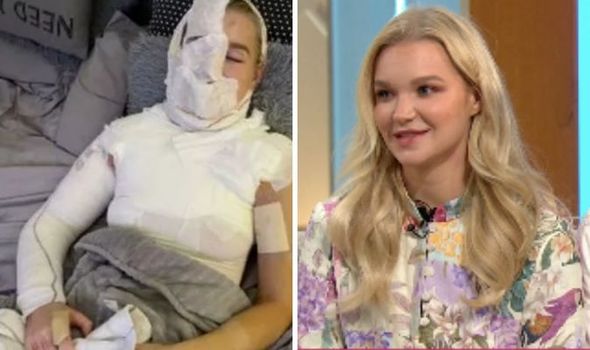 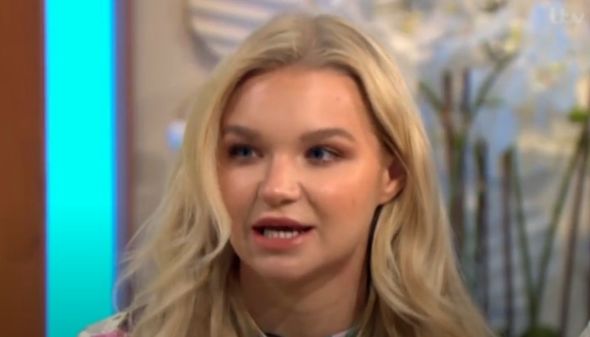 “I think AJ wanted to do this life hack,” Abbie told the host.

“This home hack and what everyone has been doing recently just to find something to do.”

AJ chipped in: “Upturning an old wine bottle into a vase for flowers fundamentally.

“And wrapping a rope around the bottle, lighting it with some chemicals on it and placing it in cold water and then it cracks, and you’ve got a vase. 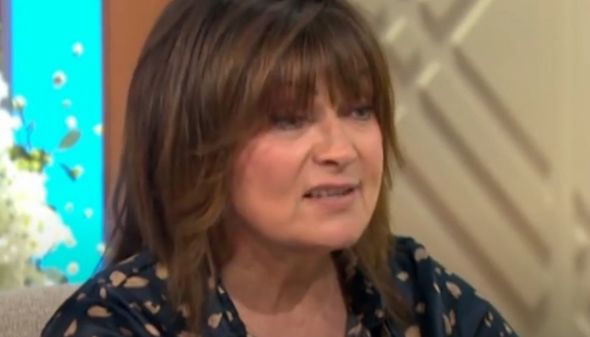 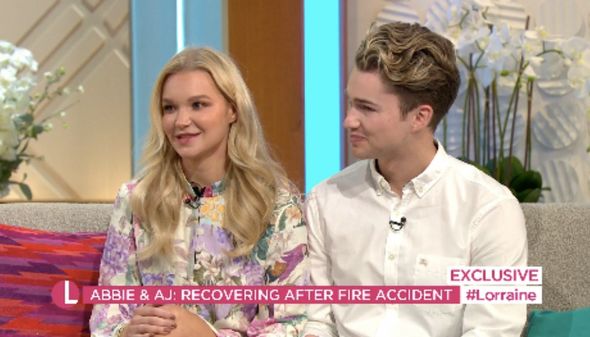 Abbie continued: “We watched the video straight before we did it, to watch step-by-step and everything and unfortunately, it just went horribly wrong.

“I was stood about four metres away from AJ and it went up, straight away, it went straight across the room and it caught my hair instantly and then, unfortunately, my body as well, my clothes.”

Lorraine asked: “AJ you didn’t panic, you sort of went into survival mode, didn’t you?”

The professional dancer replied: “Seconds feel like a lifetime. When Abbie hit the floor and tried to roll and grabbed a blanket to put the fire out, at the same time I was grabbing wet towels to put on the areas, calling the ambulance, going to A&E.”

“It felt like a whole year within a second,” he added. “But you just have to do what you’ve got to do in those scenarios.

“As soon as I handed you off to the professionals at the hospital then I was a goner, I broke down.”

Before the duo continued, Lorraine stopped to warn viewers not to try the trend at home.

Abbie, who is also a professional dancer, said she questioned whether she could survive from the accident at the time.

“At the time, when I was on fire, I was just thinking, ‘How can I survive, how can I get myself out of this situation?’ so I don’t actually remember it being that painful,” she recalled.

“I think I was just in shock and trying to think how can I put this out, basically.”

She went on to admit she feared her face would never be the same after suffering third-degree burns.

Abbie added: “I think when it happened I was just thinking the worst.

“My face is never going to look the same again, I’m always going to have scars on my body, I’m never going to be able to dance or perform and do what I love doing, so I instantly thought that was it for me. Luckily my face is healing really well.”

Lorraine airs daily at 9am on ITV.

'The Challenge: All Stars': Who Went Home During the Premiere Episode?