Amy Duggar King is lashing out after receiving quite an interesting message. The former 19 Kids and Counting personality revealed that she may raise Daxton as an only child despite some critics believing she should have had more children by now.

Amy is the Duggar cousin who was made famous by appearing on the show with her uncle. She has since moved away from the spotlight to live a more normal and mainstream life, something she makes no apologies for.

What did the message say that Amy Duggar King received?

On Instagram, Amy Duggar King shared a message she received from a follower. While the image shows it was a sent message, the former reality star shared in her Instagram stories that it was actually sent to the 3130 Clothing Instagram account instead of her personal one.

No name was disclosed, but the message that was sent to Amy was harsh.

It said, in part, “aren’t you a little behind some other famous people who have four babies by the time they are 20?”

It also said, “Pick up the pace you should have been pregnant like yesterday.”

Amy and her husband, Dillon King, just celebrated their little boy’s first birthday. She has been enjoying spending time with her son and watching him grow. 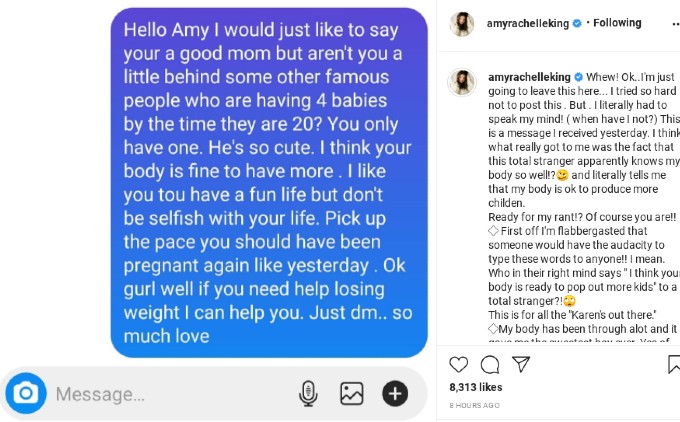 What was Amy Duggar King’s response?

In order to get out everything she wanted to say, Amy Duggar King had to make a post and continue her message in the comment section as well. She was less than impressed with the way someone was able to come at her with the harshness of what was said, but then close the message by saying, “so much love.”

Throughout everything she said, Amy made a surprising revelation.

She said that she and her husband were considering having just one child. A large family isn’t for her, especially with all of the noise and chaos. Amy is an only child who was raised by a single mom with her from her Grandma Mary Duggar.

Exposing these kinds of messages has been something Amy Duggar King wants people to learn from. She was brought up kin to a famous family who had strict rules and regulations. They weren’t always the same ones she had to abide by but she knew about them.

Amy also revealed she’s been judged since she was a teen, and now, she is still living in that vicious cycle.

Counting On is currently on hiatus.

Michelle Trachtenberg Reflects on Being Bullied in School on Valentine's Day: 'Kids Were Cruel'

Michelle Dockery: ‘Downton shot me into the spotlight overnight’

The Undertaker is Rumored to Return For WWE Survivor Series 2020

Therapy for a Jets fan: ‘I can’t take it anymore’