Andi Peters was back in Wales, this time on a canal boat to deliver the competition. Following Susanna Reid and Ben Shephard’s interview with Michael Holding where the West Indies cricketer used a swear word to describe his feelings, the comeptition host spoke out about his own experiences of being a person of colour and how he too has been followed around a shop, with the assumption he would steal something.

“We have never shied away from discussions that people find uncomfortable and using a word, I think just the use of that word expressed it all,” Andi began.

“What sometimes, as a person of colour, you go through is a load of old [b*llocks].

“And it’s just actually nice to hear someone on television just say it so everyone hears it.

“What he said about being followed in shops, supermarkets, because of the colour of your skin, that really exists, it happens to me enough times for me to know someone thinks ‘I’m going to nick the wispa bar – I’m not, I’m just going to get it and pay for it like everyone else’. 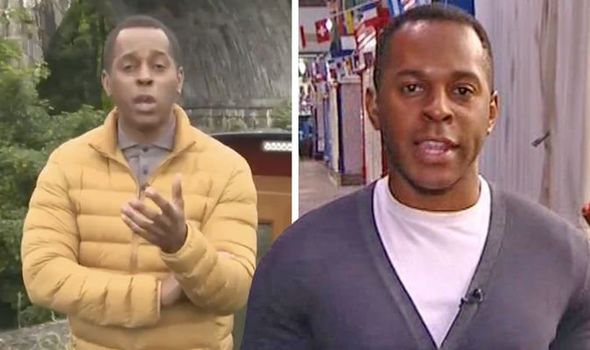 “It’s extraordinary and just so refreshing to hear somebody speak so openly about it on the television, it meant a lot, meant a lot to me,” he continued.

“And I’m sure a lot of people watching will be ‘thank you Michael,’ because he speaks the truth. That was it!”

Susanna said: “And, it’s really important to reflect on that and as I said, before the break, sometimes the language is entirely justified.

“But this is what people talk about when they talk about white privilege, a really contentious phrase but just as you say, the fact of the colour of your skin means in some situations – I don’t have somebody following me around the shop making an assumption about me, you do.”

“And you know it’s happening but there’s nothing you can do.

“Hang on a minute, that means you made an assumption’, so I’m lucky because somebody realises ‘Oh it’s you!’ Well, hang on, what does that mean?

“You judge me on the colour of my skin until you realise I’m the bloke of the telly, ‘he won’t steal,’” Andi remarked.

“But do you know what, we’re talking about it and we should be ashamed to talk about it.

“Michael didn’t have a tirade on our show, he didn’t use expletives in an explosive manner, he said one word.”