In a new episode of Antiques Roadshow which was brought to BBC One viewers from Bodnant Garden, North Wales, expert Duncan Campbell was on hand to advise the owner of a shield about its value. The item which depicted Milton’s Paradise Lost was a replica and the lady who owned it wasn’t convinced she was going to fetch much money for it. Despite it being a copy, Duncan revealed a staggering sum someone could pay for it should it go to auction.

The lady explained to those watching at home: “So I’ve brought a shield, the original is in the V&A museum in London, and it depicts Milton’s Paradise Lost.

“I don’t think it’s valuable particularly, because it’s a replica piece, but it’s interesting to find out a bit more about it.”

“It’s an extraordinary project, it’s called the Milton Shield and this one is Milton’s Paradise Lost,” Duncan began.

“So you’ve got Archangel Gabriel explaining about the defeat of the rebel angels to Adam and Eve here. 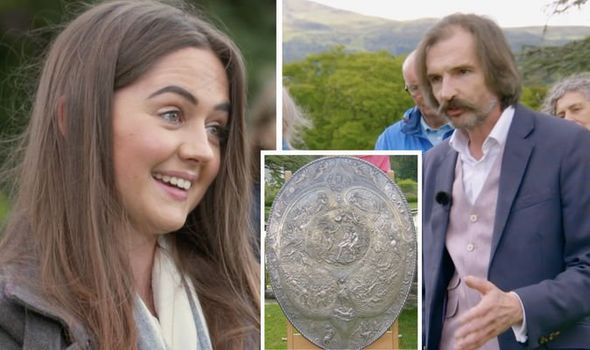 “You’ve got Gabriel again with a lovely gilded breastplate down here killing Satan. Satan looks in terrible discomfort and pain as well. And then there are signs of the zodiac around here and angels and putti and cherubim.

“And so it’s got everything on it. The detail is extraordinary,” he added. “You could just stare at it for hours and you could stare at it again for hours and still find stuff you didn’t find the first time. How have you ended up with it?”

She revealed: “So my grandad moved abroad about ten years ago and the last time that he was back in the UK, he passed it onto me. So he wants to keep it in the family.”

“Become an heirloom?” Duncan asked and the guest confirmed this was true. “Good idea.” 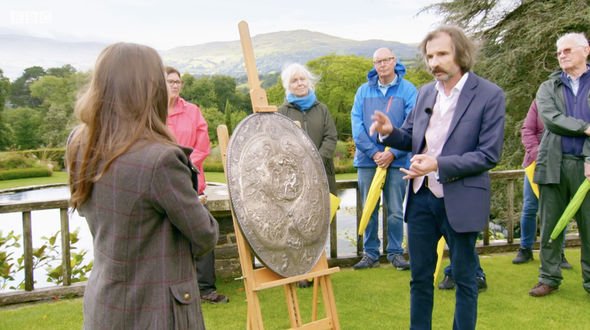 “I think he had it for about 40 years and he’d got it perhaps from a friend,” the lady continued.

Duncan was keen to know whether she liked the shield and whether she was going to keep it.

“I do,” was the answer to the first question before she added: “Yes,” to not selling it.

“The original version was commissioned by a firm called Elkington & Co in 1866,” Duncan said. “In fact, it’s signed at the bottom here by both Elkington and the man that made it, whose name was Morel-Ladeuil. 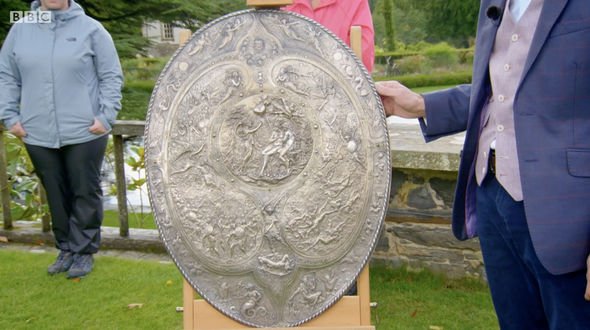 “I probably pronounced that wrong, he was an extraordinary sculpture working in Paris. So it has all the credentials.

“It’s a tour de force of the sculptor’s or chaser’s art. The original actually is in steel and silver and gold.

“It was the talk of the Great Exhibition of 1867 in Paris. They were all terribly excited about it.

“This is a copy of that original,” he confirmed. “They were made to give everybody a chance at looking at this wonderful thing.

“The process that Elkington developed in the 1840s called electrotyping was considered to be the very cutting edge of technology. It was terribly exciting to sort of early Victorians to be able to copy exactly a piece of metalwork.

“Your one’s lovely, it’s in very good condition – it good do with a clean, I’ve got to tell you! Before you hang it up on the wall, I hate to bring it up!”

As for how much the shield was worth, Duncan said: “If you put that into an audition – I’m not suggesting you do because Grandpa would not be pleased – you’d walk away with about £10,000.”

“Really? Wow. I did not see that coming,” the lady exclaimed.

Antiques Roadshow airs Sunday evenings at 8pm on BBC One.

'Great British Bake Off' Contest Speaks Out After Online Harassment