The No. 1 rule of reality TV is don’t sign up for it if you’ve got skeletons in your closet. Or, if you do, be OK with those skeletons coming out… if you consider them skeletons at all. In the case of Below Deck’s Chef Rachel Hargrove, she says she’s got nothing to hide, including a 2005 audition for America’s Next Top Model. The internet recently unearthed the clip of a then 23-year-old Rachel strutting her stuff for Tyra Banks and co. at the open casting call for Cycle 4 of the modeling competition, and only ET has Rachel’s explanation of her reality TV past.

“Oh, yeah! That happened,” the now 38-year-old Bravo star confesses with a laugh. “That was so much fun! I was bartending and the casting director came up to me and [said], you know, um, ‘Excuse me, have you ever thought about being a model?’ And I thought, are you f**king high?’ I’m slinging drinks and I’m a kitchen creature, so it wasn’t like, it wasn’t one of those things where I was like, hey, I’m gonna go stand there at this cattle call, but it was kinda cool. They just kind of brought me through, I think it had to do with my personality being just off the wall, so… I don’t know! It was a lot of fun, it was a lot of fun.”

“Tyra’s interesting,” she adds. “The whole experience kinda gave me an idea of what reality TV might become.”

Rachel didn’t make it beyond the initial on-camera audition, but says she had a blast taking part in the day. Her appearance on the former UPN show lasts a little less than 30 seconds, but she definitely leaves an impression.

“My competition is everybody, whether they’re skinny and tall or voluptuous and larger than me,” Rachel says on Top Model. “Anything I can do, I’ll do it. As long as I’m not showing nipple, I’m good to go. My grandparents are dead. I have no one to disgrace.” 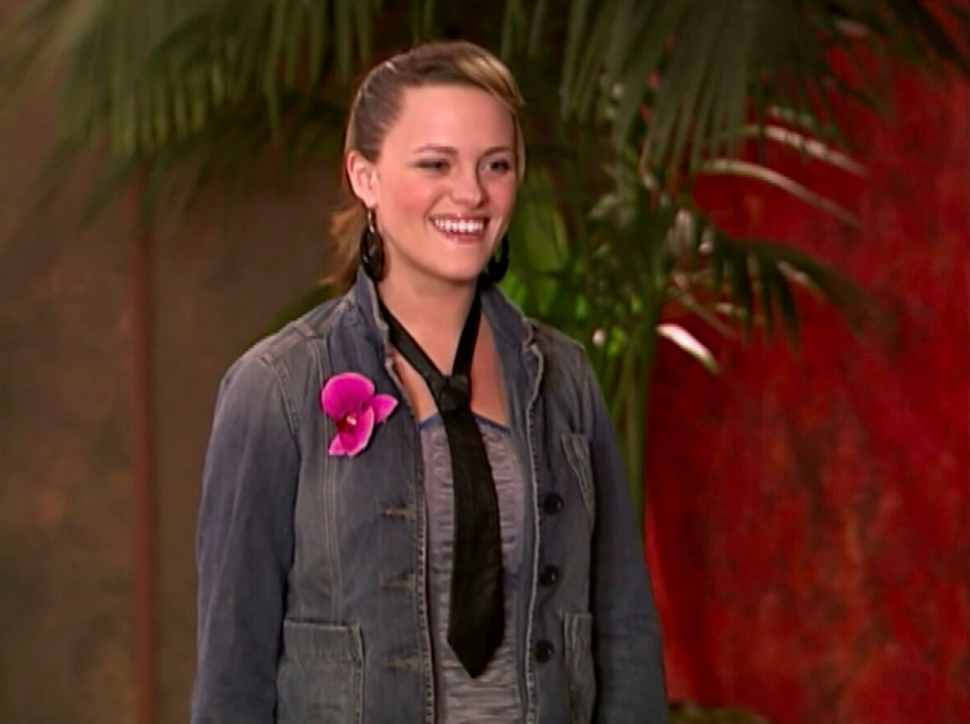 “Look, you got all the footage right there. I haven’t changed,” Rachel says after watching her ANTM appearance. “I actually, I wish that we had cameras when I didn’t make it to the next round, ‘cause then I got all the other girls, ‘cause, like, were were sequestered away in a hotel room, and I had bottle service come and we just got wasted and we snuck out of the hotel and like, partied downstairs. It was great.”

ET also showed the clip to Below Deck alumni Kate Chastain and Josiah Carter to get their take on the moment. The former stews are now providing their commentary to episodes of Below Deck in the spinoff show, Galley Talk.

“I worked with Rachel on yachts as chief stew and she was chef before Below Deck, so I already knew this about her and um, it’s no surprise to me, because she really is gorgeous,” Kate says. “She’s kind of a mix between a Charlize Theron — she had short hair at one point — and Reese Witherspoon, like she’s got, she’s really stunning and she’s got personality plus. I mean, she’s hilarious, she’s one of the smartest people I’ve ever met. So, I’m not surprised at all.”

Both Kate and Josiah’s jaws dropped while watching the vintage TV moment, as the show’s creative director Jay Manuel tells an arguably svelte Rachel that she would represent the “plus size” market on the show.

“I love how she didn’t even flinch,” Kate says of the now-cringeworthy moment. “She was like, ‘Sure!'”

“I think what we see with Rachel is, she’ll basically get the job done no matter what,” Josiah adds. “She’s like, ‘Yeah, that’s what I have to do, I’ll do it.'”

“Which makes for a great yachtie!” Kate proclaims.

See the group’s full reaction to Rachel’s past reality TV life in the video above. Below Deck airs Mondays at 9 p.m. ET/PT, while Below Deck: Galley Talk — on which Kate, Josiah and more former stars weigh in on the happenings of season 8 — airs Fridays at 8 p.m. ET/PT, both on Bravo.

Rebel Wilson's New Boyfriend Is a Good Fit for Her: 'He's a Match for Her Humor and Personality'

South Park On HBO Max–Which Episodes Are Missing And Why