Note: This article contains spoilers for the entire first series of Blood

Channel 5’s twisty-turny thriller Blood kept viewers guessing till the very end, delivering a final episode quite unlike anybody had expected.

With Jim Hogan (Adrian Dunbar) having apparently confessed to killing Mary (Ingrid Craigie), the concluding chapter took place almost entirely in flashback, revealing that though he’d ended his terminally-ill wife’s life, it was at his her request.

The show’s heroine, Jim and Mary’s daughter Cat (Carolina Main), only appeared in sequences book-ending the finale, with Blood writer Sophie Petzal telling Digital Spy that this unorthodox ending was “one of the first ideas” that came to her while writing. 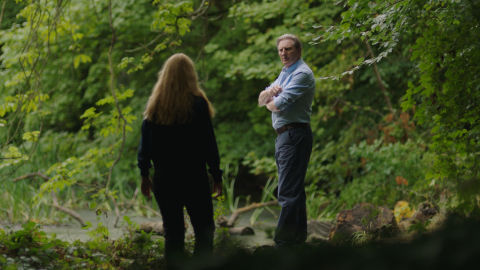 “I definitely didn’t want to do a big fat twist – a [typical] thriller ending – because they’re so hard, and we knew that Blood wouldn’t be relying exclusively on its thriller credentials,” she explained. “I always wanted it to be a family drama at the heart of it.

“So it felt like a really organic way to end it. You feel the big thriller beats in that penultimate episode, where the truth is prompted out of the suspect. But then we use the last episode as a sort of contained hour, where we find out what’s happened.”

Addressing Cat’s absence from the last episode, Petzal admitted, “Sometimes it was raised: is it a problem that Cat doesn’t really appear in this episode at all?

“But my feeling was, her ending scene with Jim would be so powerful – that was the hope – that you’ll feel like she’s had a huge presence anyway. And the last shot is still on her face. It’s still her story that’s culminating.” 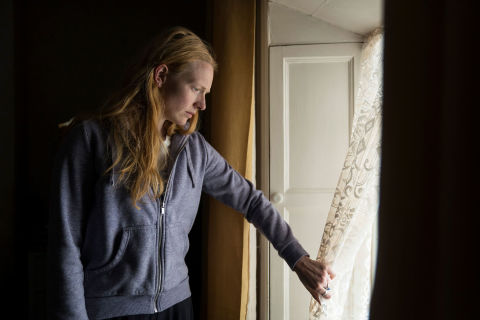 Blood was originally inspired by Petzal’s fascination with “the fallibility of memory” and how children often have differing views on their parents. Cat’s conflicting perspective on her father compared to her siblings’ was also in part inspired by true-crime series The Staircase – in the series, author Michael Peterson is accused of killing his wife and while the majority of his children stand by his side, one daughter believes he committed the crime.

“I remember thinking, ‘I’m not interested in the court case – I’m interested in that kid, I want to know about that kid’,” Petzal recalled. “From there, we just started talking about a way of telling that story.”

Petzal actually wrote the part of Hogan family patriarch and potential murderer Jim with Line of Duty‘s Dunbar in mind. “When myself and Jonathan [Fisher, producer] were first discussing and developing the idea, we joked, ‘And that [part] is played by Adrian Dunbar.’ I only ever pictured it with him playing Jim.”

Once Dunbar was on board, talks began in earnest with broadcasters to pick up the series. Channel 5 might at first feel like a left-field choice for the gripping six-part drama, but green-lighting Blood was in fact part of a conscious rebrand from the channel in the wake of Big Brother ending. 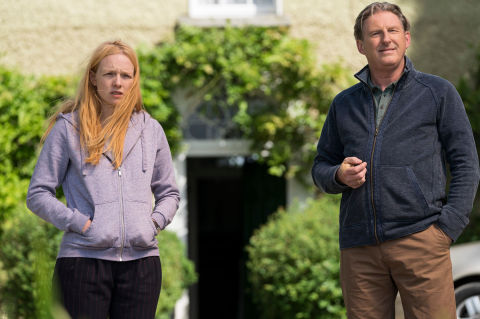 Petzal admitted: “At first, I thought, ‘God, this is going to be weird, isn’t it?’ – that we’re going to be going out after Young, Dumb and Locked Up in the Sun, or that kind of thing. What’s that going to look like?”

“Only later down the line did we realise that Channel 5 were doing a rebrand. And so then obviously, two weeks before we go out, they cancel Big Brother, and I was like, ‘Oh my God, if people hate Blood, we’re going to be seen as that terrible show that killed Big Brother.’

“It was always incredibly exciting [to be on Channel 5], if a little bit confusing. And then it just became incredibly exciting, but also satisfying, because a lot of walls had been knocked down for us to charge through. We just had to hope it would pay off.”

Pay off, it did, with the series earning a hugely positive reception from critics and the general public. So with that in mind, have we really seen the last of the Hogan family?

The first series ends with Jim having confessed and being led away by police, Cat having previously contacted them in the belief that her father killed her mother in cold blood. But is that really the end of the story?

“It’s TBD [to be determined],” Petzal said. “That story of Blood 1 is resolved. But whether we’ll see the Hogans again is TBD. That’s not my decision to make, sadly. But never say never.

Blood is available now on DVD.

'Unsolved Mysteries' Teases Reboot With Vintage Mix of Murder, Disappearances and the Paranormal