“My show is just me, the guitar, the piano, the words and music,” he says. “Personal and intimate.” 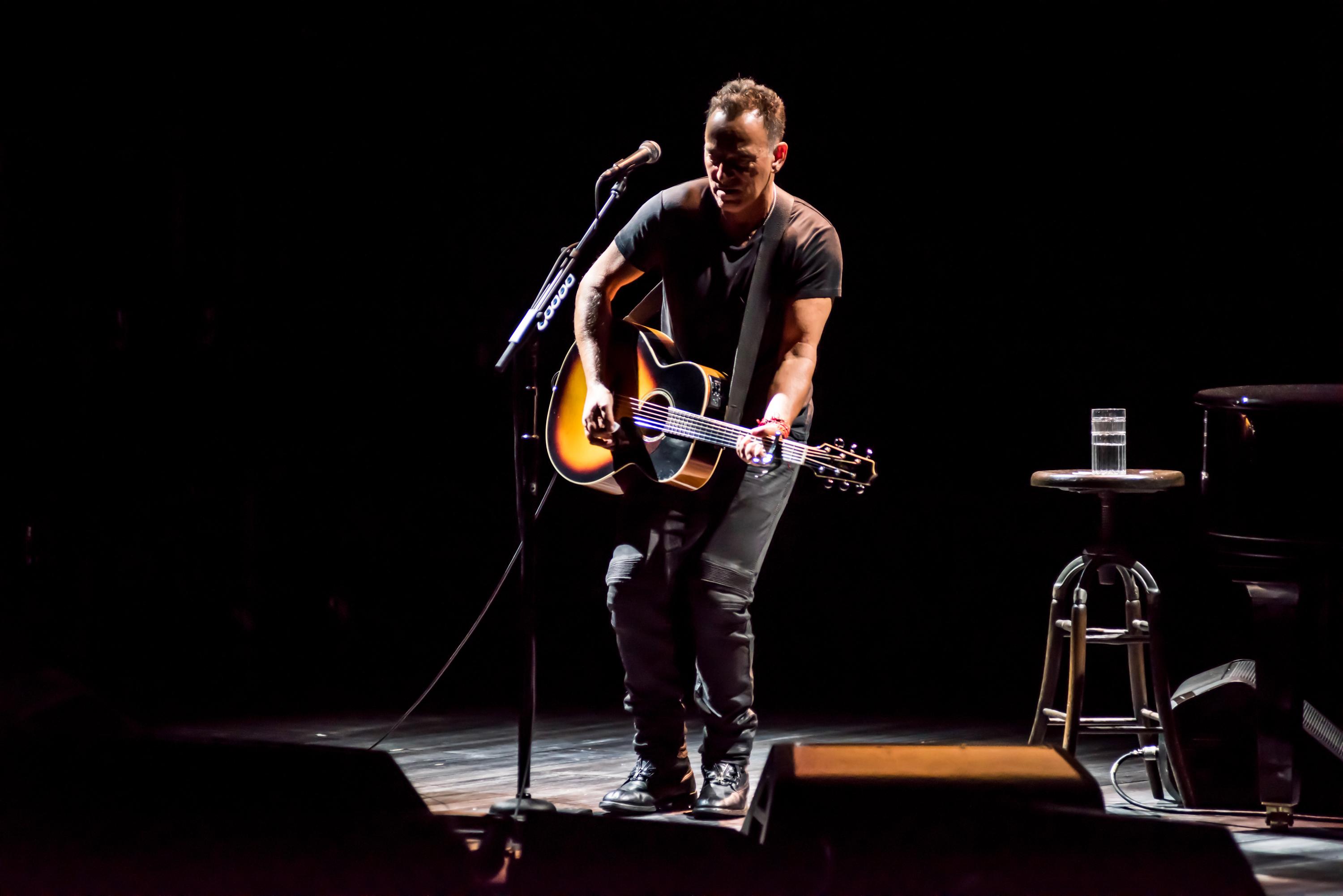 Aside from two duets with his flame-haired wife of 37 years, Patti Scialfa, he’s not wrong, yet somehow he’s never really alone up there on stage.

At each one of his cathartic Springsteen On Broadway performances, he’s joined by the “ghosts” of family and friends he’s loved but who are now gone.

His dad Doug with his Dutch and Irish blood and his dear departed E Street Band brothers Clarence Clemons and Danny Federici.

His flamboyant Sixties inspiration, Jersey Shore frontman Walter Cichon, and “absurdly funny” drummer Bart Haynes, who played in his first band The Castiles, both lost in the horror of Vietnam. 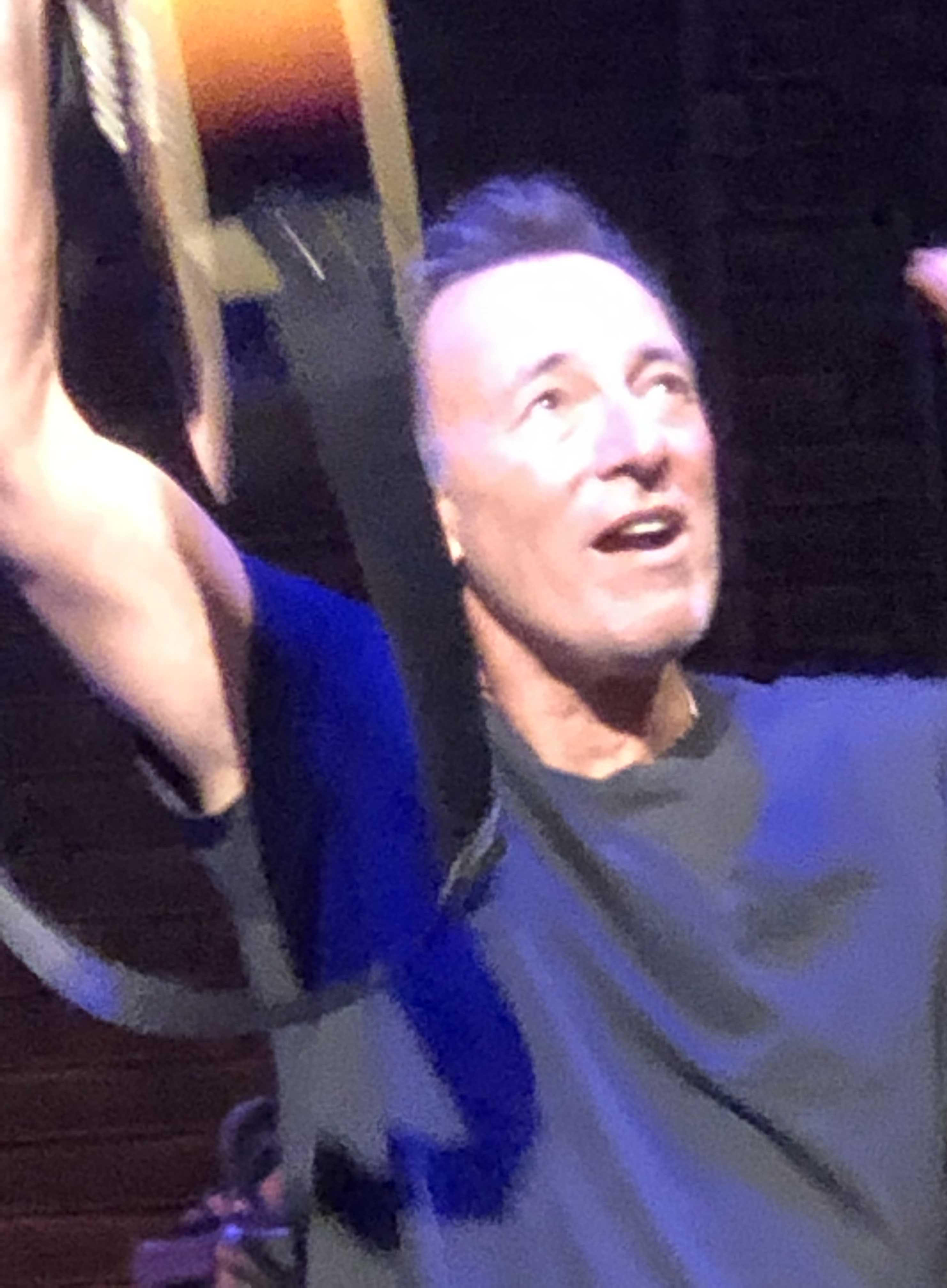 During heart-on-sleeve introductions to songs, I notice (from the privileged position of Row E) that he employs the word “ghosts” a lot.

“We live among ghosts always trying to reach us from that shadow world,” drawls rock ’n’ roll’s blue-collar champion. “I can commune with them and feel their hands on me. I remember them all.

“My dead father is still with me every day and I miss him,” he continues. “And if I had a wish, oh man, I wish he could have been here to see this.

“But I visit with him every night a little bit. That’s a grace-filled thing.”

He lays bare his soul night after night

Springsteen’s residency at New York’s 960-seat Walter Kerr Theatre, a stone’s throw from the neon-infused chaos of Times Square, is captivating for the way he lays bare his soul night after night.

His is the story of a skinny chancer driven by towering ambition (and considerable talent) who drags himself up by his bootstraps from humble beginnings.

The idea sprang from Springsteen’s autobiography Born To Run, which delved in some detail into the depression suffered by both Bruce and his father, with whom he had a conflicted and complicated relationship.

The one-man show, what he calls his “song of myself”, serves as a group therapy session and has the profound effect of easing his mental pain. 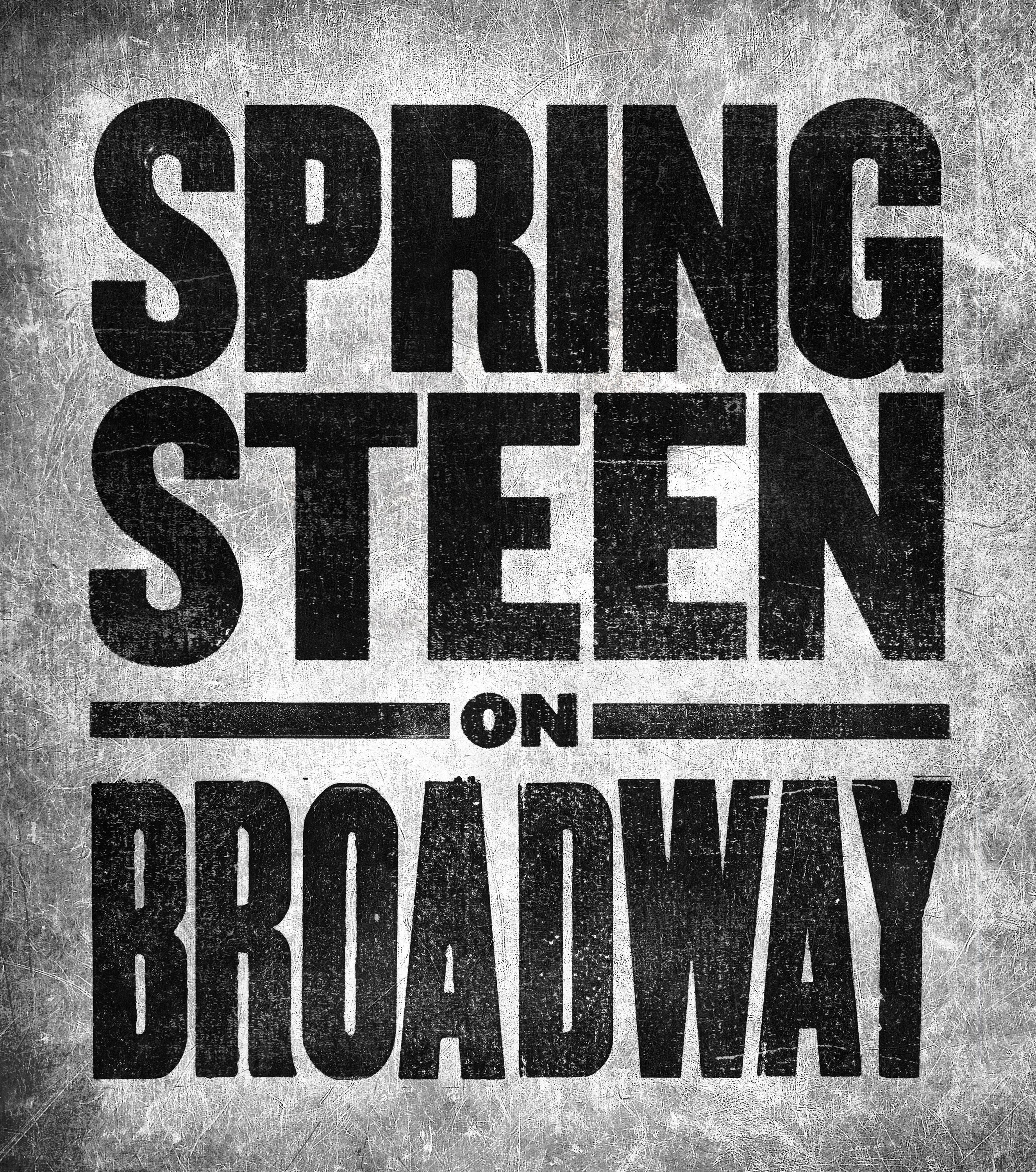 During a run of 236 shows which started in October last year and ends on December 15, nothing gets in the way of Springsteen’s abiding goal “to communicate something of value”.

The direct approach means there’s a minimal stage set and an understated lighting combo of white and blue with touches of red and purple.

For an intense two hours and 42 minutes, he summons deep emotion and self- deprecating humour while stretching every sinew in the compact, muscular Springsteen frame. 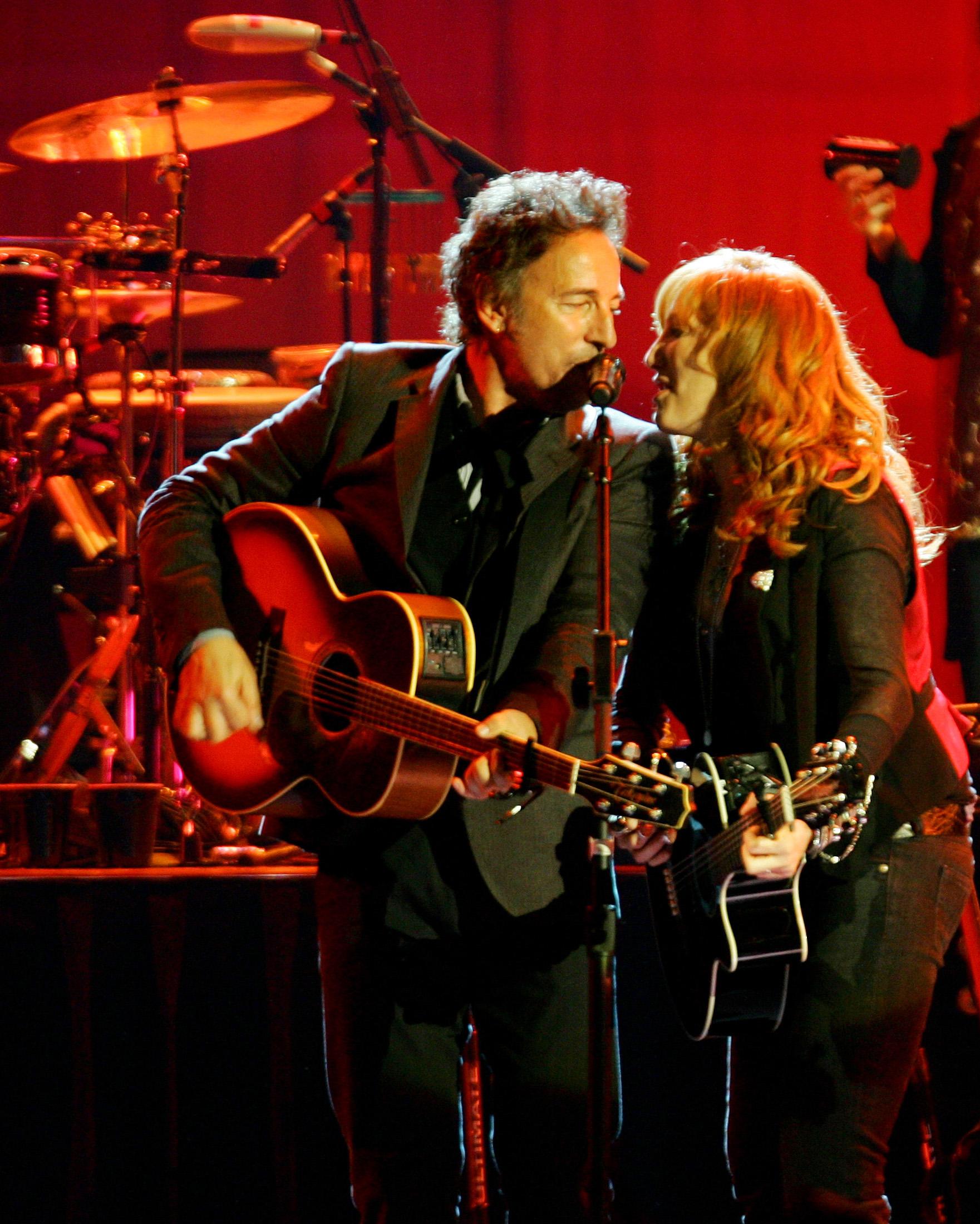 He’ll be 70 next birthday but displays the vim and vigour of someone half his age.

He believes his life in rock ’n’ roll remains governed by “that furious fire in your belly that just don’t quit burning”.

As Netflix viewers and soundtrack album listeners will soon hear, Springsteen begins the show by explaining he was a bit of a fraud when he started out, “no race car driving rebel, no street corner punk”.

But the wannabe was one of the bar band kings of the Jersey Shore boardwalks not far from his home town of Freehold and he was attracted to the bright lights like a moth round a flame.

I miss the beauty of that blank page

“I never had an honest job, never worked five days a week,” he admits, adding “until now” in reference to his gruelling five-night blocks of Broadway shows.

These days, he envies the fearless spirit of his youth when he unwittingly began assembling one of the finest bodies of work in contemporary song.

Before launching into a spirited reading of Growin’ Up from his 1973 debut album Greetings From Asbury Park N.J., he recalls the twin pursuits of his early adult years . . . music and sex.

“There was a whole new world below your belt,” he cries to audience sniggers before slowly, stiffly and suggestively raising up his guitar neck from his knees to above his shoulders.

He muses about his inspiration for both pursuits, Elvis Presley, a “human Adonis” oozing sexuality who left him feeling “pathetically creepy” by comparison.

He fires up Growin’ Up again, ending the song with a windmill guitar action that would make The Who’s Pete Townshend proud.

Then he talks of New Jersey being a dead-end kind of place with few opportunities . . . the only way to get on being to get out. 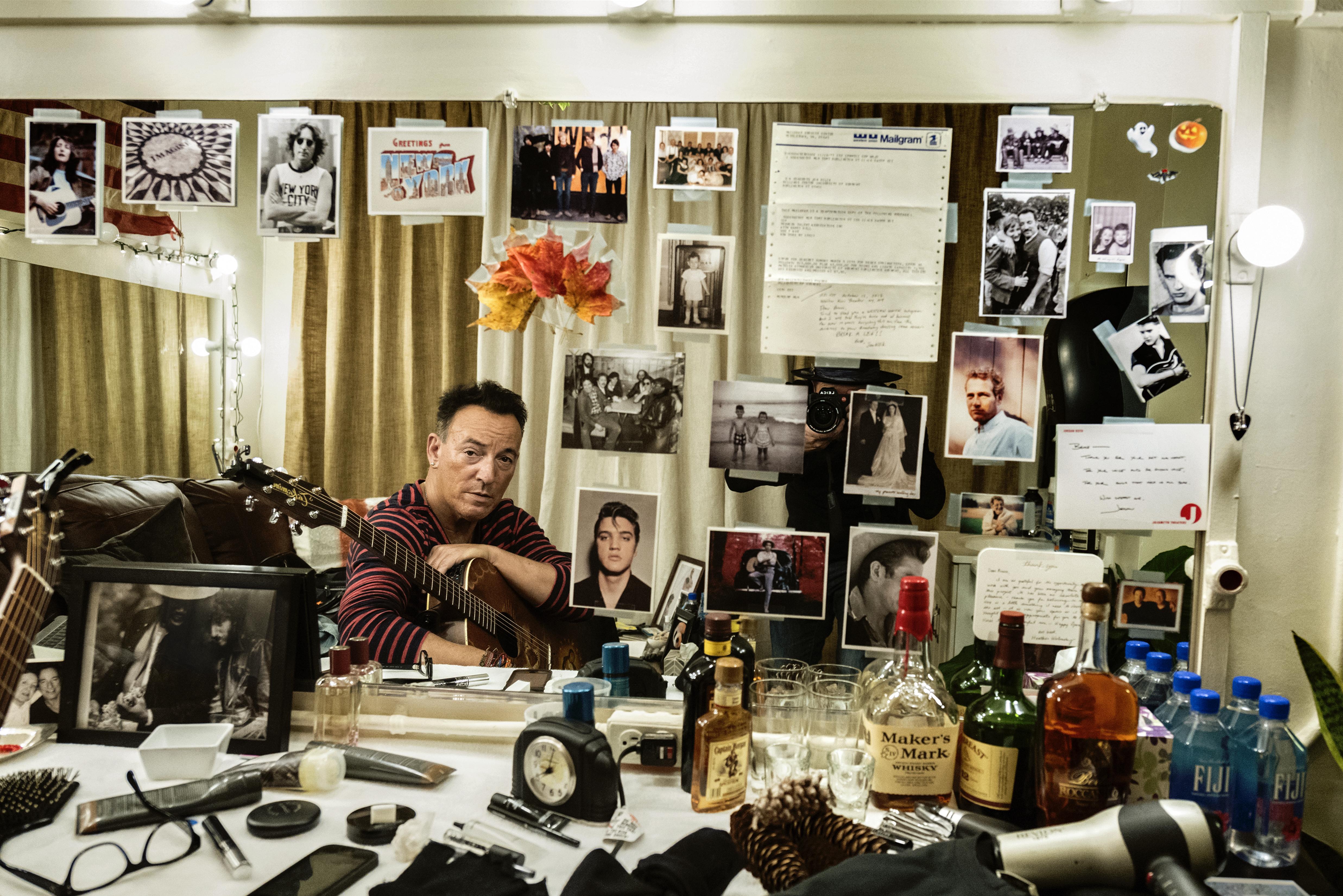 “I’m Mr Born To Run! I’m Mr Thunder f***ing Road!” he exclaims before riffing on the lyrics of the former, his defining song. “New Jersey’s a death trap, it’s a suicide rap.

“I’m gonna run run run and I’m never coming back . . .  (deliberate pause). I currently live ten minutes from my home town. Tramps like us, baby we were born to stay home!”

Back in the early Seventies, Springsteen was searching for a break when he and his bandmates were summoned to California for an audition. They had a beaten-up van and 72 hours of hard road in front of them.

“And the man who wrote Racing In The Street couldn’t even drive,” he confesses. 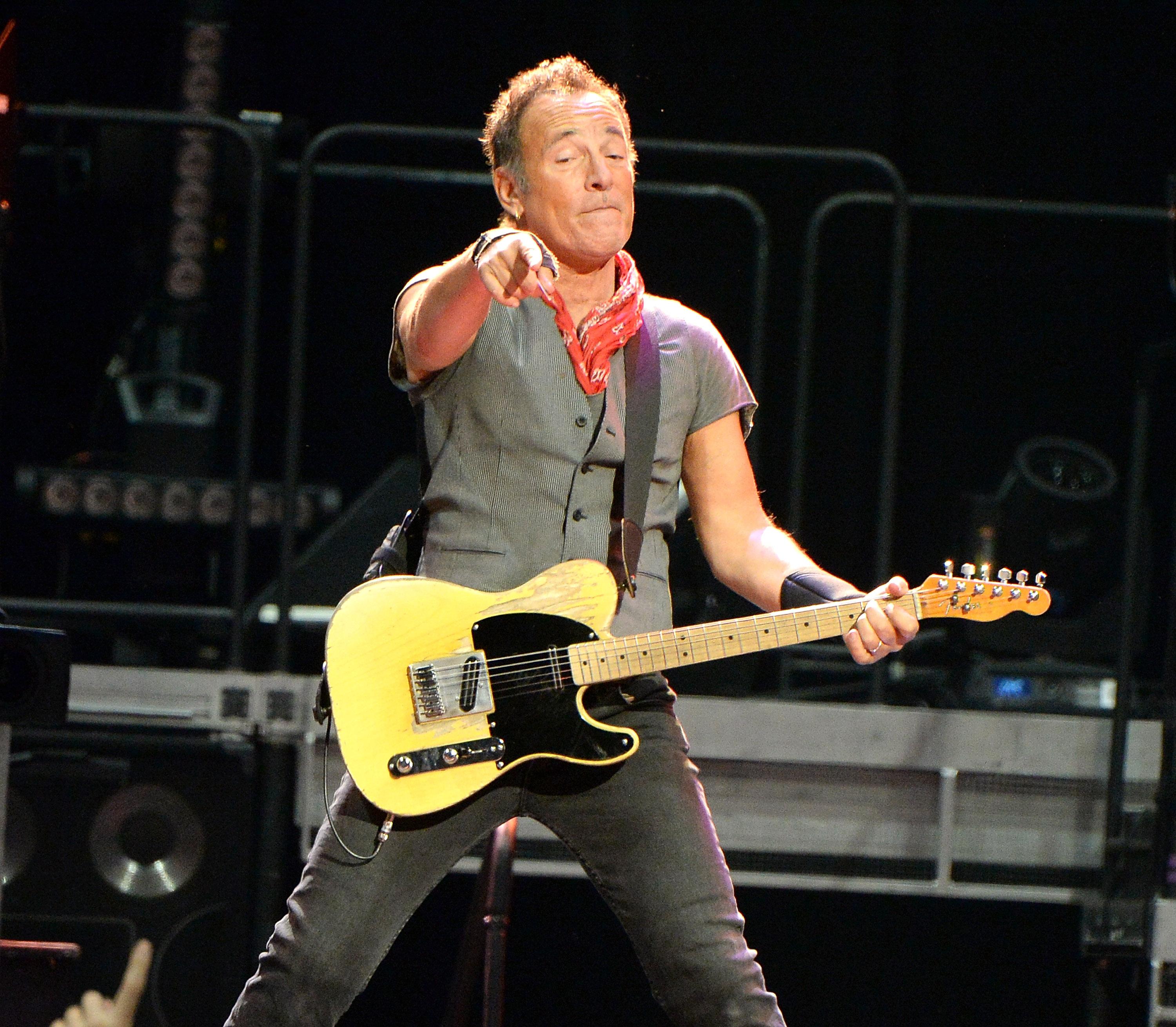 Springsteen interviews are like hen’s teeth but he gave Nick Rufford of The Sunday Times further insights into his childhood stomping ground, the racial tensions of the time, maybe explaining his initial urge to leave to succeed.

“The world was a smaller place because of the lack of internet. No social media,” he says. “Towns were very tight-knit. If you were a working-class family, you didn’t leave town much. And consequently your world was your neighbourhood.”

He recalls a more innocent time but one where bigotry was never far away. “It was still filled with incredibly fraught human dynamics. There was a lot of racial animosity.

Our President is ignorant about his language

He fears that present White House incumbent Donald Trump is returning America to the bad old days of prejudice. “There’s always folk at the extremes who aren’t mentally well and who are stirred up by incendiary rhetoric,” he says.

“That’s why Presidents are usually cautious about the words they use. Our President is not. He is reckless, careless and ignorant about his choice of language.”

Back on stage, he returns to his dad, from classic immigrant stock of course, and recalls hauling him drunk out of a bar “with his fire engine red Irish face” when the young Bruce was still “waist high”.

However often his father drifted in and out of work at the expense of his family, however often he neglected his only son, Bruce retains unconditional love for Doug Springsteen. 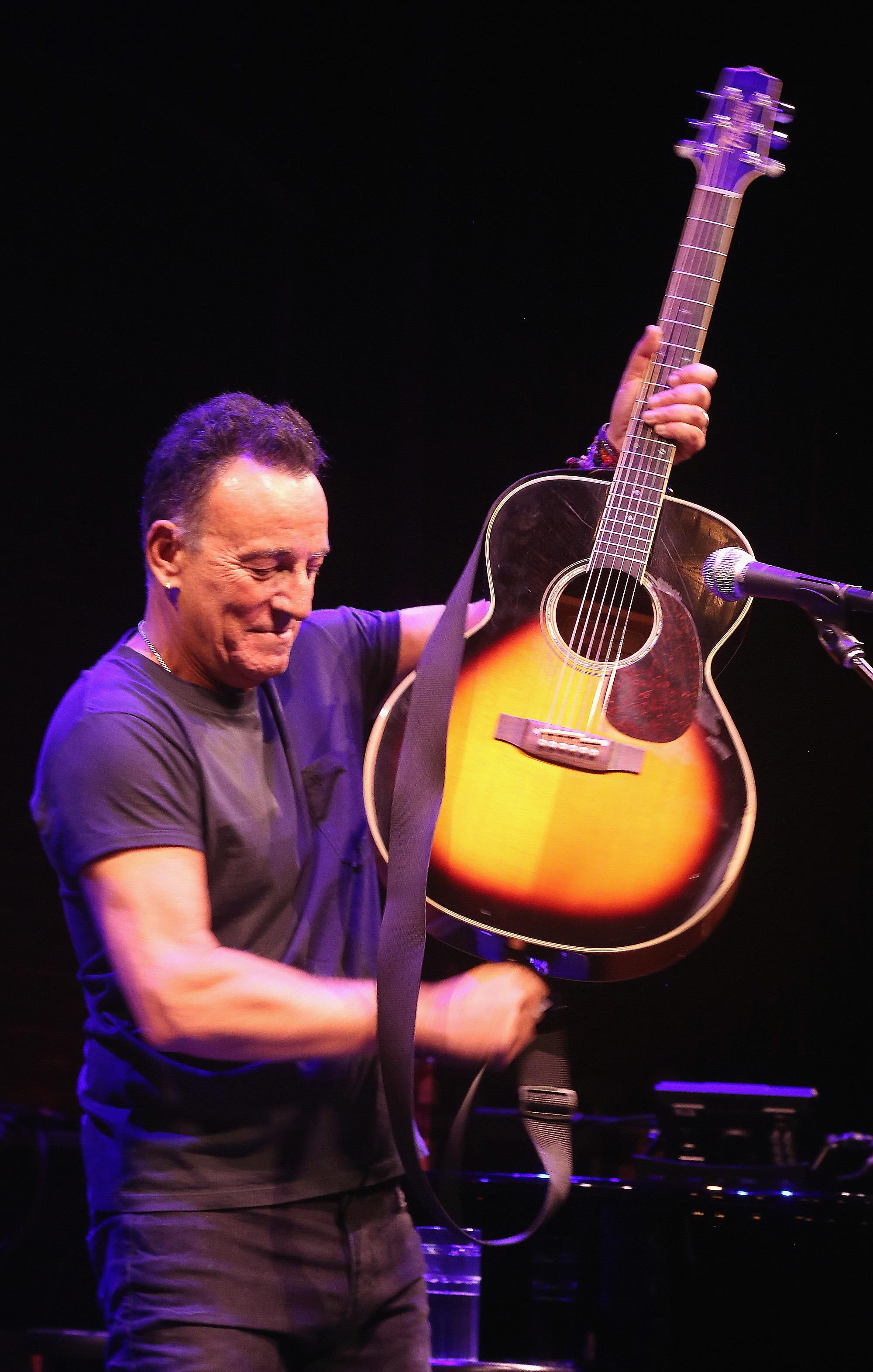 Before a poignant rendition of My Father’s House from his sparsely arranged acoustic album Nebraska, he enthuses about “Dad’s Old Spice bottle”, the cheap aftershave that was, to teenage Bruce, “the smell of manhood”.

“He was my hero and my greatest foe,” Springsteen says, recounting a recent dream in which his father comes “back from the dead” and sits in the audience.

He finds himself lovingly stroking his dad’s arm and yearns to tell him, “That guy on stage, that’s how I see you.”

If Springsteen’s father proved to be Mr Unreliable, his mother Adele, still with us but “eight years into Alzheimer’s” at 93, is just the opposite. 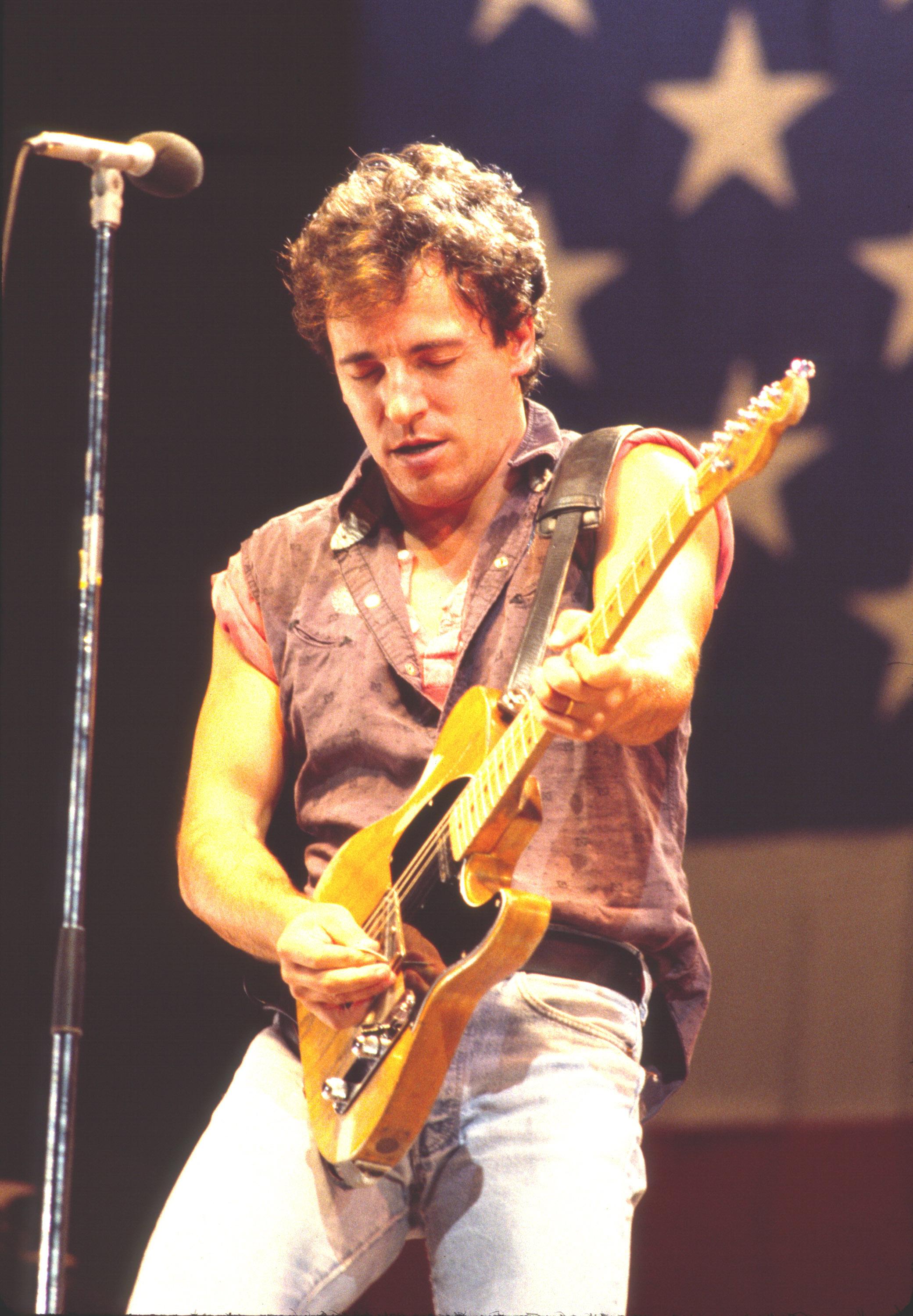 He praises the fierce determination she had to create a strong family environment for him and his sisters Ginny and Pam.

Of Italian ancestry with the maiden name Zerilli, she was a legal secretary, the main breadwinner with “her coal black hair, her olive skin, her Roman nose and her red lipstick”.

Springsteen says his mum loved “to dance and dance” to music by her big band heroes such as Glenn Miller and Harry James . . . and still does.

“Now she finds even the simplest things hard to do but dancing has never left her.”

This heartfelt tribute to his beloved ma ushers in an out-take from 1987’s Tunnel Of Love album, The Wish, complete with a nostalgic reminiscence of her prime.

“Well it was me in my Beatle boots, you in pink curlers and matador pants/Pullin’ me up off the couch to do the twist for my uncles and aunts.”

Adele Springsteen’s presence is also felt before and during a performance of Dancing In The Dark.

“When things look dark, do as my mighty mum would do,” he suggests. “Lace up your dancing shoes and get to work.”

Patti is the queen of my heart, my Jersey girl

The same cannot be said of the late, great 6ft 5in tenor saxophonist Clarence “Big Man” Clemons, seen so majestically on the cover of Born To Run with Springsteen leaning on his giant shoulders. “No one captures audiences’ imaginations like Clarence,” says Springsteen. “Our love for one another was strange and exceptional. I miss walking out on stage with the Big Man . . . it was a glorious feeling. Clarence was elemental in my life.”

In a tear-stained moment, he adds: “I’ll see you in the next life, Big Man,” then he’s into a piano-driven performance of Tenth Avenue Freeze-out with its line, “When the change was made uptown/And the Big Man joined the band.”

Springsteen also sifts through the mists of time to remember his fallen idol, Walter Cichon, singer in The Motifs and “the greatest rock ’n’ roll frontman on the Jersey Shore in the bar band Sixties”, killed in Vietnam. 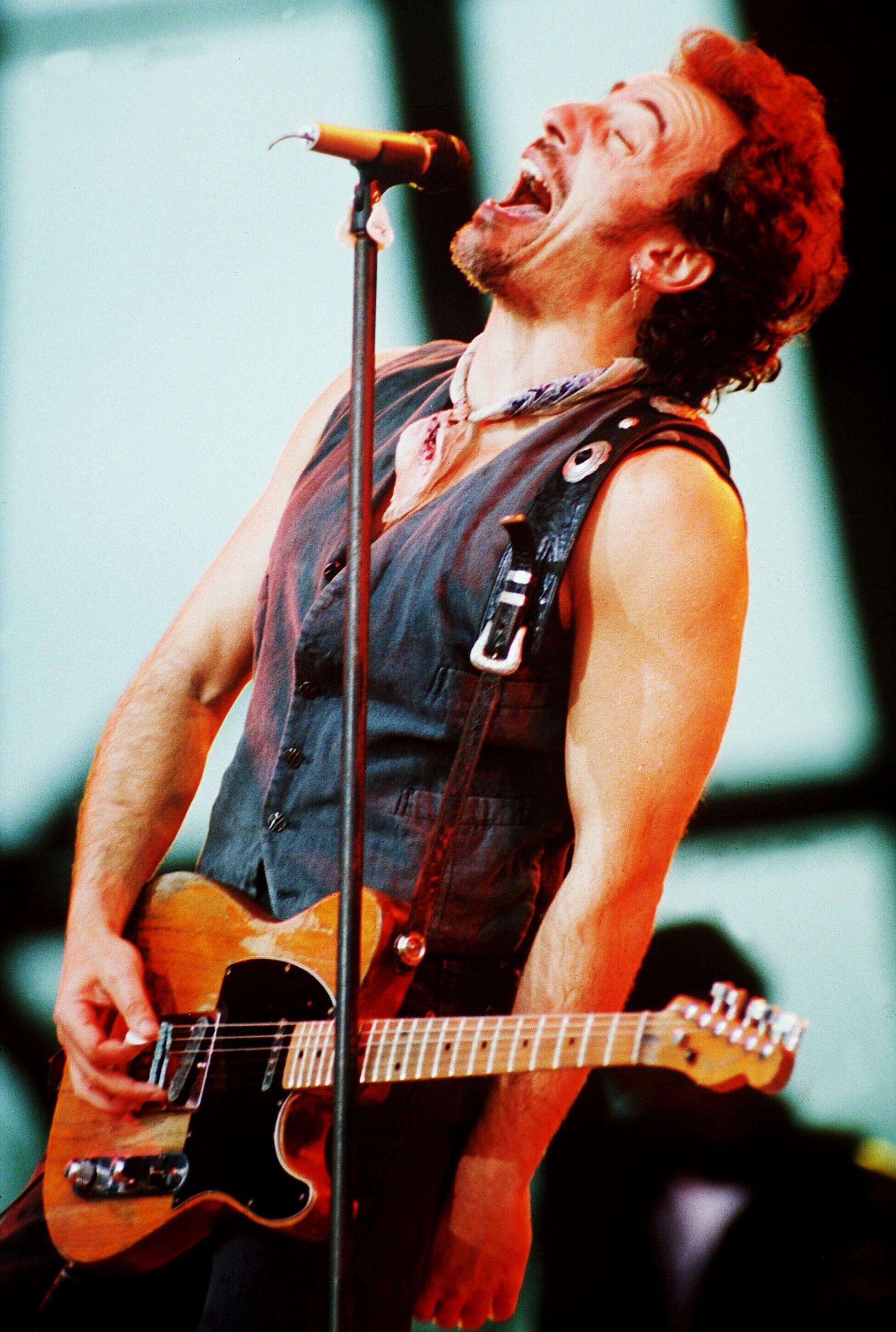 “He was the first real rock star I ever laid my eyes on,” he says. “He had it in his bones, in his blood.

“On stage, he was deadly and raw and sexual and dangerous.” Then he speaks of another Jersey musician “simply sacrificed to save face for the powers that be” . . . Castiles drummer Bart Haynes.

“He was the first real drummer I ever played with. He was the classic class clown . . . and the first young man from our home town to give his life in Vietnam.”

All this leads up to Springsteen performing Born In The USA, cast here as a searing anti-war torch ballad, and the singer is reminded of the day he dodged the draft with two mates, Mad Dog and Vinnie.

He says they climbed aboard “probably the unhappiest bus that ever pulled out of Asbury Park because we were sure we were on our way to our funerals.

“When we got to the Newark draft board, we did everything we could not to go. We succeeded, all three of us. I do sometimes wonder who went in my place, because somebody did.”

Springsteen reserves a healthy dose of affection for wife Patti who joins him for a Tunnel Of Love pairing of serene Tougher Than The Rest and jaunty Brilliant Disguise.

“She is the queen of my heart, she is my flaming beauty, my Jersey girl,” he affirms. “She has one of the loveliest voices I’ve heard. She is smart, tough but fragile, don’t forget that part.”

Though he’s fighting fit, Springsteen accepts he’ll be walking into his twilight years “alongside his chosen partner, with the clock ticking.”

It’s Patti who will help him “hold off the darkness” even though he senses “a storm” coming.

But for now, as the last notes of final song (and only possible choice for it) fade, Born To Run, it’s time for all present to salute The Boss of Broadway.

'Gilmore Girls: A Year in the Life' 2: 4 Questions That Need to Be Answered if the Revival Returns