BBC Breakfast returned for its first instalment of the week with Dan Walker and Louise Minchin on the sofas bringing BBC viewers all the latest news stories as they happened throughout the morning. They were also joined by broadcaster favourite, Carol Kirkwood, who was on-hand to update those watching at home on the weather outlook for the week. However, after Carol made a blunder during her last forecast of the morning, Dan told her to “not berate herself” and praised her efforts throughout the pandemic.

This morning, Dan and Louise welcomed a host of guests on the programme, including fitness sensation Joe Wicks.

Weather host Carol was also in the studio alongside the pair and gave the outlook on the forecast for the rest of the week.

“These are the temperatures, around about eight degrees where we’ve got the clear blue skies. 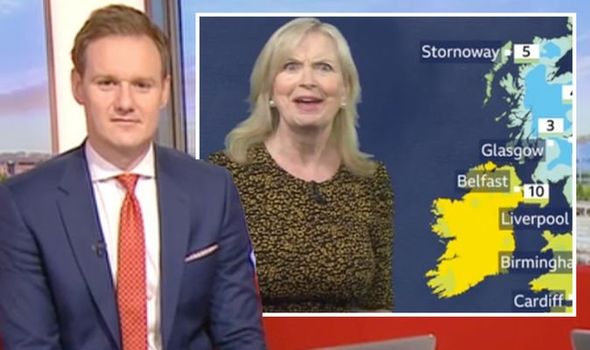 We will use your email address only for sending you newsletters. Please see our Privacy Notice for details of your data protection rights. Naga Munchetty snubbed by Carol Kirkwood after awkward jibe

She went on to explain the weather front would push “northwards and eastwards” with rain moving towards those areas.

“As it engages with the cold air, we’ll see some snow, mostly on the hills.

“Temperatures are still 10 or 11 degrees compared to further west and north,” Carol said as she pointed to the East of England. 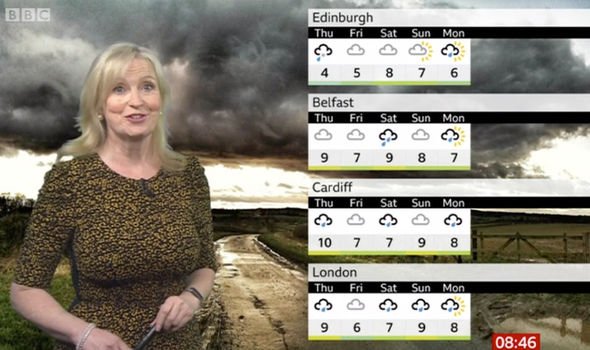 She quickly corrected herself, adding: “Further east, I should say. I’m getting my wests and easts mixed up today!”

Pointing back towards the east of her country, she said: “You can see threes, fours and also fives [degrees].

“As for Thursday and into the weekend, well it is looking more unsettled,” she said before continuing with the rest of the forecast.

Carol warned of increased rain and wind ahead towards the end of the week.

After her forecast, the presenter addressed her mishap with her co-stars.

She said: “Lou and Dan, I’m off to sort out my colours and my east and west – I’ll see you tomorrow!”

However, the discussion quickly moved on from her blunder by paying tribute to the star’s positivity throughout the coronavirus pandemic.

Dan added: “I should say, don’t berate yourself because Nina [Warhurst] has just wandered into the studio during your weather report.

“And she’s saying, ‘Do you know what? Thank goodness for Carol during all this.’

“I think you’ve kept Nina and a lot of us going Carol, so thank you very much,” Dan told her.