“Last take, I actually hit him — was not supposed to,” she told TheWrap 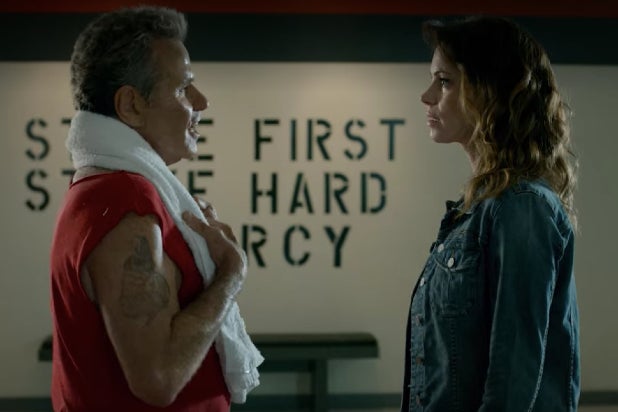 Courtney Henggeler is just about the only person on “Cobra Kai” who doesn’t roundhouse kick anyone. But her slap sure packs a wallop — just ask Martin Kove.

Henggeler, who plays Daniel LaRusso’s (Ralph Macchio) wife Amanda LaRusso on Netflix’s “Karate Kid” sequel series, is probably underutilized in the ensemble show. But she makes her moments count — and boy did Samantha LaRusso’s (Mary Mouser) mom have a moment in Season 3.

“That was definitely not, like, an actor moment for me, that definitely wasn’t like, ‘He is Kreese, you’re Amanda. He just, like, f–ed with your family. Like, get this done.’ That was not what was happening,” Henggeler told TheWrap of slapping Kreese (Kove) in his own dojo. “I was like, ‘Oh my God. I’m gonna have to slap him. Don’t f— up the stunt.’ Like, this was the big stunt they gave me. They were like, ‘Oh, you get to do a stunt this season.’ I was like, ‘What am I doing??’ They were like, ‘You’re slapping Kreese.’ And I was like, ‘Or a kick?!’ And they were like, ‘Eh, slap.’ And they brought a stunt coordinator in for it, which heightened it.”

“I was just all nervous… Because Marty has done how many stunts in his life? He was so nice and patient and very like, ‘Whatever you need. Do you want to keep practicing?’ And I was like, ‘No, let’s just get in there,’” she recalled. “But I felt like I just wanted to do a good job so I was definitely not an actor at that moment, I was definitely like a human being, ‘I hope this looks cool.’”

It did. Though the final take probably made things a little uncomfortable at the craft services table.

“Last take, I actually hit him — was not supposed to. And they say that you’re not supposed to stop a stunt ever if you make contact because then not only have you hurt somebody, but you’ve ruined the shot as well, so don’t do both,” Henggeler said. “I definitely made full contact, full hand, on his face. And I was like, ah, don’t ruin the shot!”

Or the relationship, we suppose.

All three seasons of “Cobra Kai” are currently available to stream on Netflix.

Princess Anne’s swipe at The Crown over major surprise: ‘How could you possibly?!’