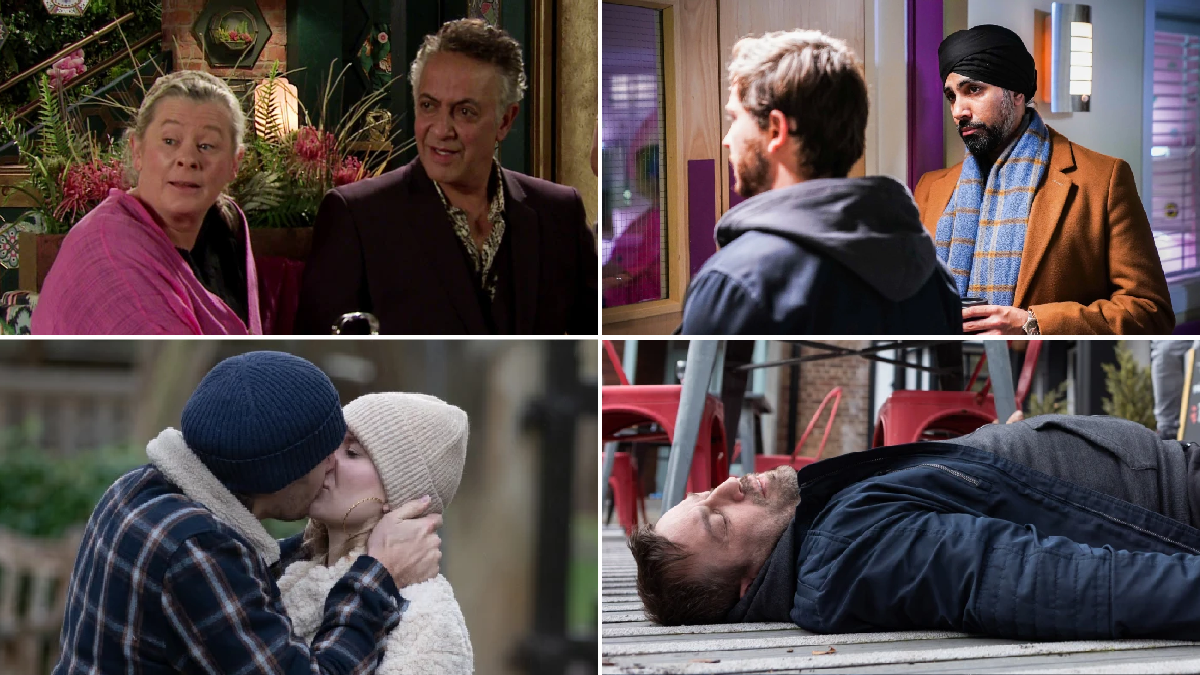 Another huge week awaits in the land of soap, with shock discoveries, arrests and a sudden collapse on the cards.

Sally Metcalfe finds herself taken away by the police ahead of Tim’s operation in Coronation Street, but she’s not the only resident of the cobbles that will be questioned by the authorities during the week in questions.

Emmerdale, meanwhile, sees the return of Meena Jutla, but that’s not all, as there is relationship drama for Mackenzie Boyd and Charity Dingle, which results in a shocking kiss.

Warren Fox collapses in Hollyoaks and has a seizure, leaving Joel Dexter concerned for him, while EastEnders’ Kheerat Panesar ups the ante in his mission to get Gray Atkins to confess.

1. Tim begs Kevin to speak to Sally for him, hoping he can make her see how sorry he is for not telling her about his triple heart bypass. Will Sally forgive him before the operation? That remains to be seen, but as the anaesthetic takes effect, Tim hears a commotion coming from the hospital corridor, as Sally is arrested!

2. Sally reveals that the developers are refusing to back her campaign because of an article in the gazette. Faye suggests that maybe another candidate provided the picture to scupper her election chances, leaving Sally’s interest piqued!

3. Craig is summoned to the station after taking a call from a fingerprint expert, leaving Emma’s worried sick. It’s a false alarm, as he returns home, revealing he’s in trouble for wasting police time. But the nightmare is far from over, as Craig reveals that Ted’s post mortem indicates he was run over, which could’ve triggered the blood clot that killed him. After another close call, Faye crumbles.

4. Lydia is taken aback when she discovers that Daniel was accused of an inappropriate relationship with Summer, and she subsequently voices her concerns to Sarah. Daisy, however, overhears and leaps to Daniel’s defence. Daniel, meanwhile, learns of Daisy’s kind words, and is taken aback.

5. Bernie warns Hope to stay away from Joseph and keep shtum about her deal with Clint. She stresses to Joseph to keep quiet too, but Evelyn is on to her. Bernie is forced to defend herself, denying that she had anything to do with Joseph’s disappearance. Evelyn, however, is unconvinced and thus calls the police. Both Bernie and Chesney are hauled in for questioning.

6. Carla has a go at Jenny, claiming that her moving on so soon with Leo after Johnny’s death is inappropriate. Jenny, however, has other things on her mind when she finds out that Leo has been injured playing Rugby, and she receives an even bigger shock at the hospital!

7. Having found out from Daniel that Max skipped the consent workshop, David tears a strip off his son, warning him that if he misses another, he’ll have him to answer to.

8. Unable to tell her the truth about his sentencing, Phil breaks up with Kat! Kat, heartbroken, relays the news to Sharon, who quizzes Phil, determined to find out what’s going on. Phil ultimately comes clean, admitting that her’s facing life in prison. Sharon is stunned, and subsequently gives him an ultimatum: tell Kat, or she will do it for him!

9. Chelsea has been prescribed anti-depressants from the GP. She’s upset that she can’t breastfeed now, but Denise wants what’s best for her. Gray pretends to agree but it’s clear he’s fuming. He plays on Chelsea’s emotions and, ultimately, she decides not take the medication. Whitney, however, sees her throw her meds in the bin.

10. Dana calls Peter to let him know that she’s not feeling well and therefore won’t be making it into work. However, she forgets to hang up the call, and Peter overhears her subsequent conversation with Mila and Kioni.

11. The doctor explains to Stuart that that he wants to proceed with the surgery as soon as possible, but when they mention pain medication, Stuart panics. He later tells Mick he feels like he’s being punished for his past.

12. Ben and Callum open up about their struggles and promise to be there for one another.

13. Martin tells Sharon that he turned down the market inspector job. Stacey, meanwhile, prepares for her first day. She’s determined to do a good job, but she soon asks Martin if he’s jealous of her. Martin can’t help but admit that he was the one who turned the job down first.

14. Bailey sees Karen and Mitch arguing over their sleeping situation and hatches a plan.

15. Charity gets dressed up as she heads off to the play date with Vanessa. Ryan, meanwhile, receives the terrible news that his adoptive mum Irene has died. He confides in Mackenzie, who attempts to call Charity. Thick in conversation with Vanessa, Charity rejects his call. Mack later blurts out the news, stunning Charity to silence, who berates him for not telling her sooner.

16. Mackenzie, upset over Charity’s reaction, hits the booze, and opens up to Dawn about his relationship. He makes a drunken pass at Dawn, which is witnessed by both Charity and Vanessa. Charity and Mack, as a result, are finished.

17. Manpreet tries to recall anything Meena told her about Ben’s death in the hopes it will help Liv be released. But with a lack of evidence, DS Rogers breaks the news to Vinny that it’s unlikely Liv will be set free. Vinny, therefore, asks Manpreet to lie. Afterwards, a court hearing is requested due to new evidence. The Dingles are shocked when they learn Liv might be released, but Chas informs Vinny that Aaron isn’t coming to court, leaving him concerned how Liv will take the news.

18. Liam and Jacob are horrified when they receive word that it’s likely Meena has left the county. Enraged, Jacob has a go at Vinny, before heading off to Leanna’s grave. Leyla finds him and comes up with a plan to help him through his pain. But will it work?

19. Dawn, determined to tie the knot with Billy as soon as possible, posts a ‘save the date’ announcement on social media. Meena, meanwhile, sees the announcement in a park, and seethes – hellbent on revenge.

20. Ellis and Belle struggle to find time to be alone together.

21. Warren comes to a shattering conclusion, as he comes to believe Sienna was involved in the hit and run. He finds her, and wastes little time in demanding answers. While doing so, he makes a huge confession!

22. Following his admission, Warren collapses and has a seizure. Will he be okay? That remains to be seen, but Joel swoops in to save his dad, and keeps a watchful eye on him in the aftermath. Misbah warns Warren that a change of lifestyle is necessary, but will he listen to what she has to say?

23. Tom and Yazz have an argument. Afterwards, Tom heads to The Loft, where he proceeds to drown his sorrows, but misery loves company, and it’s not long before he’s joined by someone. In the aftermath of the events, he finds himself facing a moral dilemma, and the choice he soon makes could be one that he lives to regret!

24. Becky finds out Cindy has been sending letters to Stephen McGregor, one of Luke’s attackers. She relays her discovery to Ollie, who resolves to meet with Stephen, all the while posing as Luke! Luke, meanwhile, encounters Stephen, and they end up talking about old times, but whether or not Luke truly understands what’s going on remains to be seen. Afterwards, Luke is missing.

25. Dave apologises to Maxine for the way he’s been treating her. He explains that he wants to have a relationship with her, but is adamant that it has to be kept a secret. Serena and Lizzie spot the duo together, and they ultimately jump to the wrong conclusion!

Yellowstone’s Rip and Carter dinner scene had glaring continuity error – did you spot it?