The original Creepshow film premiered in 1982, directed by George Romero and written by Stephen King. It prompted two sequels and a wave of horror anthology movies, including The Twilight Zone and Cat’s Eye, which featured two of King’s short stories from his collection Night Shift.

In 2019 Creepshow transitioned to the small-screen as a TV series on Shudder, complete with all of the campy horror we love from the original, but with new spooky tales. The second season debuted in April 2021, and the third season drops on Sept. 23. But is the third time the charm? 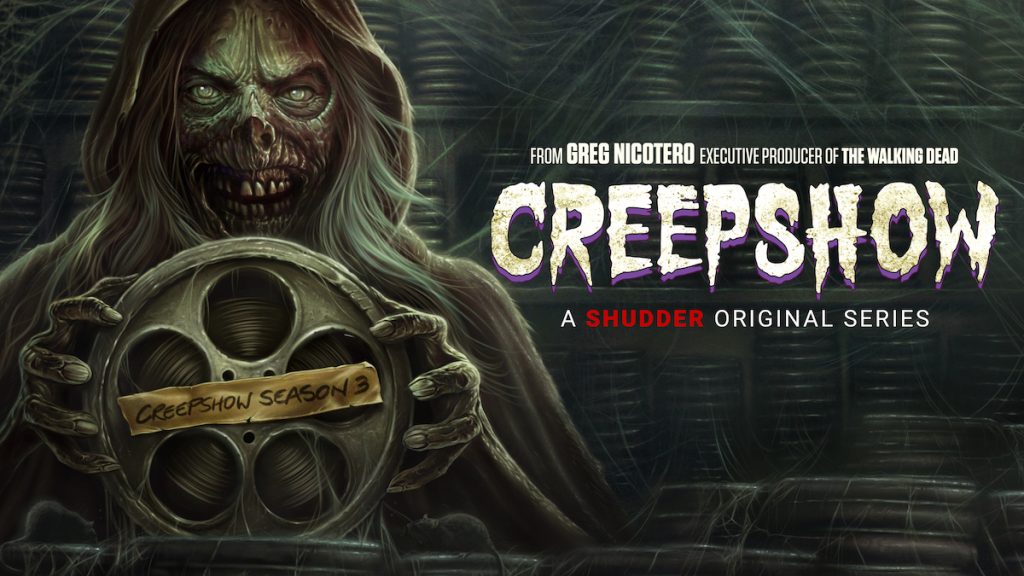 ‘Creepshow’ Season 3 Episode 1 gets off to a shaky start

The first segment of the premiere episode of Creepshow Season 3 is titled ‘Mums’ and stars Ethan Embry (Empire Records, Sweet Home Alabama), Malone Thomas (MacGyver), Brayden Benson (Tag), Erin Beute (The Vampire Diaries), and Lowrey Brown (Hillbilly Elegy). A young boy is separated from his mother and forced to live with his abusive father. Things take a turn for the paranormal when the seeds he finds in her suitcase aren’t the typical flowers anyone would expect.

A bit predictable and very reminiscent of Season 2’s episode ‘Model Kid,’ ‘Mums’ falters in the acting department. The performances fall flat, though not enough to make viewers stop watching. Embry’s turn as the abusive father departs from the typical roles we see him in, and he shines. Benson’s stilted lines and odd reactions are the prime offenders, quickly taking the audience out of the story. However, the special effects are creepy enough, and the segment still holds onto the camp that many associate with Creepshow.

The second segment, ‘Queen Bee’, is where the series seems to find its familiar groove

‘Queen Bee’ centers on three teenagers (Olivia Hawthorne, Nico Gomez, Hannah Kepple) obsessed with a pop star known as Regina. When the teens discover that Regina is in labor to deliver her first child, they sneak into the cordoned-off hospital to catch a glimpse.

What the group finds isn’t a woman giving birth but something far more sinister. It’s an excellent take on two timely topics those of us living in a world of social media are familiar with today. There’s a line that has to be drawn when it relates to stars and their privacy. Yes, they put themselves out there for the world to see, but does that mean fans have a right to every detail of their life?

It’s also a statement on the obsession teenagers and children today have with famous people. Much of that can be blamed on the constant bombardment of content from the celebrities, but when does the situation go from being simple fandom to a stalker-like obsession?

The acting in this segment is realistic and never distracts from the story at hand. Also, just like with ‘Mums,’ the special effects are on par with that of early 1980s horror. And let’s be honest, that’s what many of us are craving when we tune into Creepshow in the first place.

When will all episodes of ‘Creepshow’ Season 3 air?

Shudder took a cue from the days before binge-watching. Not all of Creepshow Season 3 drops at once. Instead, each episode will premiere a week apart. The first episode is set to debut on Sept. 23, with subsequent episodes premiering on a weekly basis after that. The first two seasons of the series are currently available on Shudder.

WWE Hell In A Cell 2020 Results: Roman Reigns Is Head Of The Table