Just because Eva Marcille turned in her peach doesn’t mean she’s not still a part of The Real Housewives of Atlanta. It’s a sisterhood of sorts, after all. The America’s Next Top Model star announced her departure from RHOA after season 12, but when season 13 pops up on fans’ TV screens (likely next year), Eva’s face will be there — at least for Cynthia Bailey’s wedding episode.

“Eva will be front and center,” Cynthia teases of her big day, which is this Saturday. “Eva is definitely one of my bridesmaids.”

The two women, who video chatted with ET, started off as rivals on Housewives when Eva joined the show in season 10, pitted against each other as “the models,” Cynthia from the “old school” and Eva from the “new school.” But once the reality TV cameras went down, the women’s friendship fell into place.

“At the end of the day, this is a sunflower,” Cynthia says of Eva. “I’m love and light. I think that energy kind of overwrites any of the bulls**t that was thrown our way. I just felt her spirit and I liked her, I always liked her. I didn’t really know her much before the show.”

“Well, I know who you were, Cynthia Bailey!” Eva quips, recalling her first encounter with the supermodel. The ladies were seated across from each other at a New York Fashion Week show in 2010, Eva approached Cynthia for a picture, Cynthia obliged… but then immediately turned away from her future co-star!

“She said thank you and moved on,” Eva recalls, saying she basically clutched her pearls after experiencing what felt like Cynthia blowing her off.

Cynthia and Eva have teamed up with Seagram’s Escapes for the brand’s Holiday Marketplace, a one-stop virtual shop to support Black-owned businesses. Black entrepreneurs have until Oct. 15 to submit their businesses and products for a chance to be included in the digital shopping experience at this link. Three lucky businesses will also be chosen for $10,000 grants.

“For Eva and I just being black women, this is where it definitely hits home for us,” Cynthia says. “We are businesswomen, entrepreneurs and we want to give back and we want to support other Black women.”

When they’re not busy working, Eva and Cynthia are spending a lot of free time together. They live less than 10 minutes apart now, meaning they see each other more than they ever did when Eva was on the show. That’s made Cynthia’s life a little more complicated. She’s currently filming season 13 under strict COVID-19 protocols and lots of changes, like no international cast trip and more scenes shot at home than normal.

“I literally have to stop myself from, ‘Oh, I have to do this. Oh, I have to call Eva…’ and then I’m like, s**t, Eva’s not over here right now!” Cynthia confesses. “It took me some adjusting to realize that I wasn’t gonna be shooting season 13 with Eva.”

While Bravo has yet to confirm any new casting (and doesn’t comment on it, typically), there are at least two new girls on season 13: LaToya Ali, who’s known for her Latoya Forever YouTube channel, and actress Drew Sidora. Ironically, both ladies apparently came to RHOA by way of Eva. It’s standard practice for stars of the Housewives shows to submit names of women they know, and who they think could be good for the show, to producers at the end of every season as they seek out new cast members for the next.

“LaToya is in here, she is definitely in the mix,” Cynthia shares. “She’s a fun addition to the show. She has a very interesting life, which you guys will see all that play out, but more than anything she’s a little spitfire. She has a lot to say. She’s cute as a button, she’s a business woman, as well. Super, super, super cute. So, yeah, Latoya’s definitely all up in the mix.”

“Drew kind of got a little bit of a late start with some issues that she was having, but you guys will all see that play out, as well,” Cynthia adds. “But now she’s very much in the mix now. And she’s an amazing lady, she has a great family. … I think Drew is also an amazing addition to the show.”

The rest of the season 13 group includes Kandi Burruss, Kenya Moore, Porsha Williams, Marlo Hampton and Tanya Sam. Eva says she has no FOMO about not being around the group full-time. She says the coronavirus pandemic and the call for racial justice in the wake of George Floyd’s death caused a perspective shift in her, and she realized she couldn’t reconcile wanting to fight for change in the world while also fighting on Housewives. Cynthia herself admits it’s a tricky thing to balance.

“We are in the movement, Black Lives Matter. I think for the most part a lot of the women want to try to be more positive and uplift each other instead of tearing each other down,” Cynthia says. “With that said, it’ll be a different season, but there’s still some drama. And I can just say in my girls defense, they tried. They tried to stay in a positive spirit and continue to lift each other up throughout the movement, but some of us fell short, honey. I’ll just say that.”

Cynthia sends kudos to Porsha for being on the front lines of the fight. She’s been arrested twice now at protests surrounding the killing of Breonna Taylor. Fighting for social change will be a big throughline of season 13.

“I just commend the girls and women this season for putting their big girl panties, getting out here working — still entertaining — but not forgetting what we’re trying to do and what really matters right now,” Eva says of her former castmates. On top of Cynthia, she’s stayed in contact with Kandi and Kenya.

Eva’s apparently also gotten to a good place with NeNe Leakes, which may come to a surprise for viewers. The ladies left things off on a terrible note, feuding at the season 12 reunion after NeNe called for Eva to be fired from the show. Today, Eva sees it all as petty drama.

“I’ve lost friends … I just found out that one of my closest friend’s mom passed away. Life is short,” Eva says of reconciling with her one-time “big sis” NeNe. “Life is so short and unless it’s really something that you cannot get over, unless it’s a bell that cannot be un-rung, for me it’s not that deep. I have so much love and light with the friends that I have around me, who I speak to every day, my family. Just let bygones be bygones. I was hurt about what happened, God has restored my friendships and others a hundred fold. I’m good.” 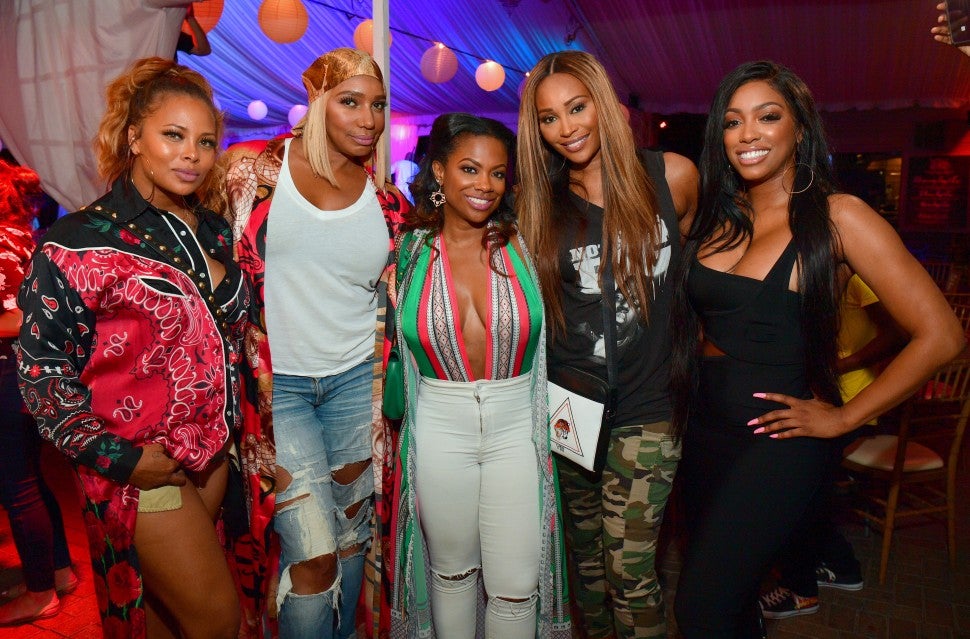 NeNe, too, is saying goodbye to Real Housewives, though it doesn’t seem like it’s totally her choice. The star was in back-and-forth negotiations with the network for months as cameras rolled on the other ladies. Last month, she announced that the talks fell through, telling her fans she felt “forced out” of the franchise that made her famous. Since sharing the news, NeNe has done a press tour and posted a number of tweets about her exit, making vague allegations against Bravo and Housewives executive producer Andy Cohen.

Cynthia says she reached out to NeNe after the news broke, but has given her some space since. She’s watching the aftermath unfold online just like the viewers are, and she finds it a bit distressing.

“I was just kind of sad watching her leave,” Cynthia admits. “I wish people would just allow her the process to just go, ‘Yes, I’m going through [something].’ Maybe she doesn’t have to do it on social media, maybe she could kind of take it in and just go through what she’s going through, but she’s entitled to that process.”

“Everything comes to an end at some point,” she continues. “I’ve been on the show for 11 years. I don’t know how long I’m going to be on the show, but when I do leave … or whenever they decide to fire me or get rid of me or whatever they want — whatever is going to happen, I just hope that for me personally, that I can look back on this experience and just appreciate the journey.”

“I really want to leave on a good note,” she adds. “I just wish me well. I just want her to be happy. She’s great TV, whether she’s on this show or wherever she ends up, NeNe Leakes, she’s good TV and she’s a strong woman. I know that from being friends with her for many years. We have not seen the last of her.”

“There have only been a few reality stars that you say their name, they represent an entire franchise and Linnethia Monique Leakes is that,” Eva says. “I think reality television — I think weekly television, appointment TV — is going to miss her. I think Atlanta is going to miss her. Good, bad or indifferent, if you liked what she was doing or you didn’t like what she was doing she captivated you. She definitely put it all out there on the line …. so much so, and so transparent, that you literally felt her pain.”

“I’m shocked to see her go and I definitely feel her pain,” Eva adds. “I root for her. I wish for nothing but the best and I hope to see me back on the screen where she belongs. That lady funny at the end of the day. She’s a good time.”

As for Eva’s reality TV future, she’s got a “never say never” attitude toward returning to Housewives or striking out on her own with a family-oriented show.

The Real Housewives of Atlanta will return to Bravo soon.