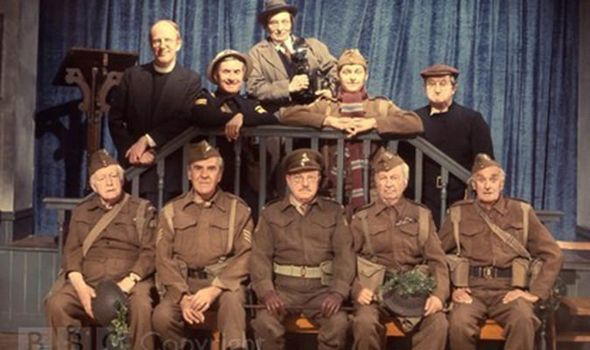 Talking on the eve of his 90th birthday, Frank says he’s amazed to have reached his 10th decade: “It’s hard to believe that I’m celebrating that milestone.” Now partially sighted, the actor walks with a stick, and admits old age has finally caught up with him. But he is still brimming with enthusiasm for life and has a razor-sharp memory.

His deteriorating vision, however, hasn’t stopped him from enjoying repeats of Dad’s Army, the evergreen sitcom which still attracts viewing figures that some modern shows can only dream of.

“I’ve got macular degeneration,” he says. “It’s irritating but I cope. I can still recognise people if they stand close to me. Sadly, I can’t read any more so I ­listen to audiobooks. When it comes to watching TV, I have to sit close to the set – but I still enjoy seeing the episodes ­whenever they’re shown.

“A few weeks ago, it was The Armoured Might of Lance Corporal Jones, the opening episode of series three. It was significant for many reasons, including being the first in colour and my debut.”

Relaxing at the north London home he shares with long-time friend and fellow actor Ronnie Grainge, Frank reminisces about the days playing Walmington’s vicar. “It was the happiest period of my professional life,” he says. “Initially, I thought it was for just one episode but the character became a regular.

“I ended up appearing in 39 of the 80 TV episodes, the original film, stage show and 14 radio episodes.” Even today, Frank receives fan letters, and over the years has received many requests from couples getting married to perform the ceremony, believing he was a real vicar.

“Mind you, I suppose the role did typecast me because I subsequently played clergy in Hi-de-Hi!, You Rang, M’Lord? and Vanity Fair.”

The appeal of Dad’s Army’s, according to Frank, is that there was no weakest link. Every member of the cast had their fair share of the laughs.

“All the characters are funny and appeal to people of all ages, including children,” he says. “Once, a friend told me that his three-year-old granddaughter liked Dad’s Army more than Postman Pat.

Of the 39 episodes Frank appeared in, he has several favourites, including The Royal Train, where Bill Pertwee (alias Mr Hodges, the irascible ARP Warden), Edward Sinclair (the snitching Verger, Mr Yeatman), Fred McNaughton (Walmington’s mayor) and Frank find themselves on a pump trolley chasing – and being chased – by a runaway train.

“We didn’t do health and safety much in those days and it was a bit hazardous at times,” he smiles. “At one point, the train seemed to be getting perilously close. We weren’t sure the driver could see us and I remember Bill suggesting that if it got any nearer it would be best to jump clear.

“At the speed we were going, this was clearly not a realistic option. In the end, of course, all was well. For the closing scene, the whole cast lined up and, fully clothed, were drenched with water.

“It was hard work pumping the trolley, risking one’s life being pursued by a train and finally getting soaked in cold water – not everyone’s idea of a good time.

“So why do I remember this episode with such affection? Well, it was fun!” For Frank, the abiding Dad’s Army memory is filming on location.

“In retrospect, those days spent in and around the Norfolk town of Thetford have an idyllic quality,” he says.

And David Croft, the director, and Jimmy Perry, the co-writer, had a reputation for being lucky with the weather during filming.

“The memory seems to be of endless sunshine, not always completely welcome as the cast sweltered in uniforms and heavy wartime clothing,” Frank recalls.

“Location filming was hard work but also fun. Relaxing in the evening at the Bell hotel over dinner was always a happy occasion.”

When Frank was cast in Dad’s Army in 1969, he set off for the BBC’s rehearsal rooms at the London Transport Training Centre, with no idea he was embarking on one of the longest and happiest chapters in his career.

“I hadn’t seen any of the previous two series, so knew little of what Dad’s Army was about,” he says. “But that first episode was my introduction to a remarkable cast of actors.

“Edward Sinclair was the kindest of men and we became great friends – so did Bill Pertwee. Over the years, the three of us became a kind of unholy alliance on and off screen.

“The platoon themselves were a marvellous bunch of characters. There was Ian Lavender, the stupid boy, who regularly did The Times’ crossword. Jimmy Beck, who played the much-loved Private Walker (the Cockney spiv), was a cheerful and good-natured man who would have become one of our most popular character actors had he not died so tragically young.

“Arnold Ridley (Private Godfrey) had written the famous play, The Ghost Train, when he was a young man. He sold the amateur rights – which over the years would have been worth hundreds of thousands of pounds – for £200. Amazingly, he felt no ­bitterness, saying that to a young and ­struggling playwright, £200 meant a great deal in those days.

“John Laurie (Private Frazer) had played all the great classical roles. Tongue in cheek, he once reminded Jimmy Perry of this, saying, ‘Now I become a household name doing this rubbish of yours!’

“Clive Dunn was much younger than the character he portrayed. It was fascinating seeing a comparatively young man create so convincingly the character of Corporal Jones.

“Arthur Lowe (Captain Mainwaring) was often perceived as being rather like the character he played, but I feel this was unfair. He certainly didn’t suffer fools gladly and always knew his own mind, but he also had an ability to laugh at himself. Personally, I found him to be a most kind and generous man.

“Finally, what can one say of John Le Mesurier (Sergeant Wilson)? He was a master of vagueness, both on and off screen. When we were on tour, he once asked Teddy Sinclair and me what we did about dirty washing. Teddy said he used a laundrette. John stared at him in disbelief. ‘You mean you sit there and watch it going round and round?’ he asked, shaking his head in amazement.

“He later confessed that for his own dirty washing, he just left it hanging around and some kind person always did it for him.

“Such carefully created helplessness, combined with John’s natural charm, was ­irresistible.” And the regular repeat fees are welcome. “I can’t remember what I was paid originally, although the fee would have been pretty standard for the 1960s. But constant repeats mean it’s become quite a decent ­pension – especially as repeat fees are linked to inflation,” smiles Frank.

“I was on the council of Equity, the actors’ union, for several years and we negotiated a good deal with the BBC, so I’m obviously earning a great deal more on repeats than the original fees.”

With lockdown restrictions easing, Frank’s insatiable appetite for work means he’s keen to resume his occasional “Audience with…” shows with entertainment producer Chris Gidney in front of a live audience.

He discusses his long career, which also includes roles in, among others, Minder and Bergerac. No doubt someone in the audience will ask about the 2016 Dad’s Army film starring Bill Nighy as Sergeant Wilson, Toby Jones as Captain Mainwaring and Catherine Zeta-Jones as an elegant German spy. Frank reprised his role as the vicar, while Ian Lavender played a brigadier – a significant promotion from Private Pike, whose role was taken by Inbetweeners star Blake Harrison.

Some Dad’s Army fans were sniffy about the reboot, but Frank loved it.

“It meant four days work, which I thoroughly enjoyed. The film was pretty successful but received a mixed reaction from Dad’s Army fans because seeing other people playing roles made famous by the likes of Arthur and John wasn’t easy to accept.”

Who knows, perhaps another Dad’s Army film might pop up one day?

“You never know, the world of acting is an unpredictable business where opportunities come and go. Whatever happens, I’ll always be grateful to Jimmy Perry and David Croft for offering me the chance. It’s given me so much joy in my career.”

The next Audience with Frank Williams is due to take place on October 10 at London’s Leicester Square Theatre.