Elijah Wood will always have a special place in his heart for Lord of the Rings.

After portraying Frodo Baggins in the fantasy franchise and seeing the overwhelming love the fans have for the films, nothing surprises the 40-year-old actor — not even the LOTR memes that have taken over social media.

“There’s so much of that ephemera that has continued to express itself, or I mean started expressing itself relatively soon after the films were initially released,” Wood tells ET’s Leanne Aguilera while promoting  his new film, No Man of God. “So I’ve come to just accept that as a part of just this universe of Lord of the Rings expression that continues to expand and grow. People send me these things occasionally like, ‘Have you seen this?’ I’m like, ‘No, but that’s funny. Thanks?'”

“But it’s funny because I actually don’t see a lot of it. For instance, the ‘Keep Your Secrets’ thing, which became a meme, people asked me about it and I hadn’t seen it,” he continues. “So people were referencing it like it was a pop culture thing, which it clearly was, but I hadn’t seen it. And I think it’s partially because my experience on Twitter, I’m not really on Facebook. I’m not exposed to that many memes, maybe. So I think I just totally missed it, and maybe I miss a lot of it and maybe that’s for the best.” 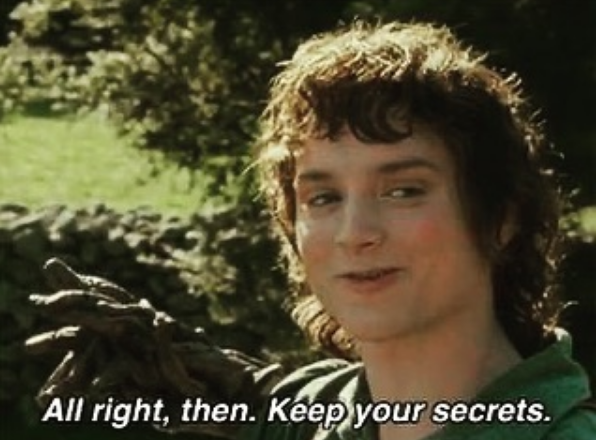 With the resurgence of revivals and reboots, including the upcoming Amazon Prime Lord of the Rings prequel series in the works, Wood wouldn’t mind reprising his hobbit role.

“I mean, there would certainly be no place for Frodo Baggins in those days,” he noted of the LOTR series. “To visit and see what it is that they’re doing in that universe and in that space, it’d be super fascinating to visit, for sure.”

“If I had that experience to do over again, in a heartbeat! Spend the better part of four years in New Zealand again with those people, making those films. I didn’t want it to end,” he recalled of his time on the original LOTR set. “Principal photography was 16 months and then we went back each year for additional shooting for pickups and reshoots. And that kind of lulled us into this false sense of security because we’re like, ‘Oh, we get to go back every year.'”

“I would have gladly kept shooting. I loved it,” he said, adding that he also wouldn’t mind reprising his role as Todd Brotzman in Dirk Gently’s Holistic Detective Agency. “Something that got cut short that I would have loved to have continued was Dirk Gently, actually. I really loved playing Todd…I would have loved to have seen that carry on because we just had a lot of fun making that show and it felt like there were so many other stories we could tell.”

Having been part of a mega franchise before, Wood — who also voices the character Jace Rocklin in Star Wars the Resistance — revealed he’d like to get the chance to “play in a large sandbox” again, and maybe even do a Marvel movie.

“I think that’s just inherently fun,” he stated. “I haven’t had a chance to play in a giant sandbox in a while…Star Wars gets precedent because I’m a huge Star Wars fan. So more of that, certainly in the live-action sphere, would be awesome. But working on a Marvel film, I mean, there’s obviously a whole conversation that happens certainly in film Twitter about sort of the cinematic relevance of Marvel. Is it cinema? All this sort of sh*t. And whether you like superhero movies or not, they are inherently fun. And those movies are extremely well made.”

“I think getting to play again in that universe’s sandbox would be a blast. It’d be totally awesome, because it’s at such an insane scale,” he added.

In the meantime, Wood stars as FBI analyst Bill Hagmaier in No Man of God. Based on a true story, the film explores the complicated relationship that formed between Hagmaier and Ted Bundy during the serial killer’s final years on death row. Luke Kirby plays Bundy.

While there have been multiple iterations on Bundy’s life story, Wood explained that this script was like no other.

“We found the script not sort of in the throngs of the focus on Ted Bundy, it just weirdly happened in the zeitgeist, in the span of time of trying to get the movie made,” he shared. “But we were just fascinated by this particular story…It was a part of his life and a story that I had not heard before. I didn’t know about his relationship with Bill Hagmaier. I didn’t know about these four years, their conversations, and ultimately a significant enough relationship that Ted felt that Bill was his best friend. He referred to him as his best friend at the end of his life and willed his last earthly possessions to Bill when he died.”

“Also what was intriguing was the fact that the conversations that take place in the film are largely based on transcripts and recollections of Bill,” he noted. “They’re incredibly accurate and that was really exciting. And it also talked about a time in his life that hadn’t really been covered. And I think that was also interesting to us.”

Playing a character based on a real person can at times be daunting, but Wood also called it “rewarding.”

“The only thing that’s unfortunate about the timing of the making of the film is that we made it as a COVID-compliant film last summer, so we weren’t able to travel. Initially we had planned on traveling east to spend time with Bill. So I didn’t actually get to meet Bill. I haven’t met him in person yet, but I have spoken to him on the phone,” he shared. “But obviously it was important to me that I do him justice…And the main thing that I wanted to know was just simply, ‘What does it take to walk into a room with someone like that? What were you thinking? What was the preparation?’ And I just wanted to get those things right. ‘Was there any sense of anxiety?'”

“And I had such an extraordinary actor in Luke Kirby to work opposite. His embodiment of Ted was so uncanny and incredible,” he continued. “That made my job so much easier. To work opposite him was a joy every day.”

No Man of God is now available to watch in theaters, On Demand and digital.

Troy Deeney: If Big Sam had stayed in charge of England, I would have been called up