Emmerdale resident Belle Dingle (played by Eden Taylor-Draper) has been on a downward spiral in recent weeks after she was initially blamed for the hit-and-run incident on Moira Barton (Natalie J Robb). Tonight, Belle reached her lowest point as her family rushed to find her in time before she was later taken to hospital. Now, with brother Cain Dingle (Jeff Hordley) desperate to get his revenge on Jamie Tate (Alexander Lincoln), it seems there could be a huge flaw in his plans after ITV viewers spotted something amiss.

Belle had been wandering the woods with a weapon on Tuesday night’s instalment after worried sister-in-law Lydia (Karen Blick) realised her knife was missing.

And after Cain alerted the family to Belle’s disappearance, the clan all went on the look-out to get her home safe and well.

Pregnant Tracy Metcalfe (Amy Walsh) was left terrified as Belle’s hallucinations of Jamie worsened and she was convinced the former was her ex-boyfriend.

Tracy managed to coax Belle out of handling the knife just in time before she called for help. 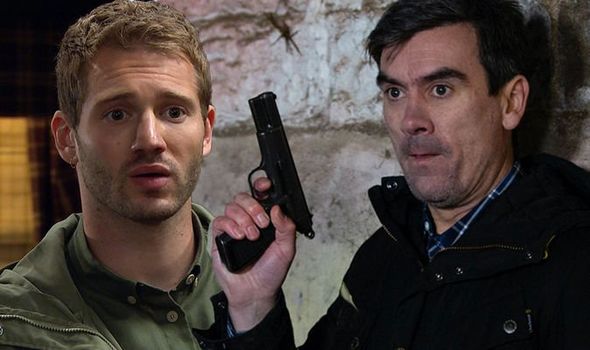 Belle was later taken to the hospital by her family after injuring herself in the commotion.

When Jamie came up in conversation yet again, it was Chas (Lucy Pargeter) who had given Cain the go-ahead to get revenge – but there could be trouble ahead.

Chas had rushed to the hospital after hearing of Belle’s condition and soon quizzed Cain and Sam (James Hooton) on what had happened.

Cain told her: “They’re doing assessments on her mental health and seeing how she responds to her medication, we’ll know more tomorrow.” 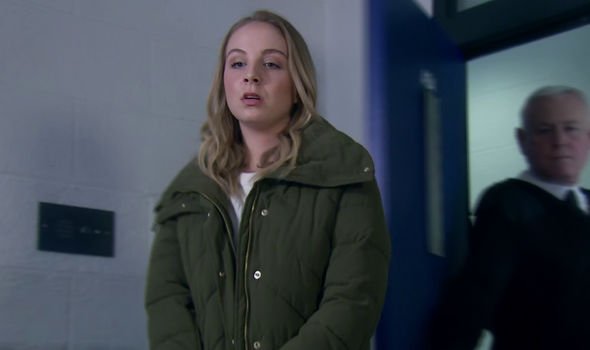 Chas went on to ask if Tracy was okay after having been terrorised by Belle.

“Why did she attack her? What’s Tracy done?” before Sam reminded her: “She wasn’t attacking Tracy, was she?”

“She was hallucinating, she thought Tracy was Jamie,” Cain added with Chas mustering an unimpressed look back.

“Everything comes back to him, doesn’t it,” Chas noted – asking Sam to go and get the pair a coffee.

Confused by her actions Cain asked what she was thinking to which she replied: “Don’t give me that, you know what, look at her.”

“She’s got mental health issues and she always will do, we’ve just got to deal with that,” with Chas noting: “She was fine until she met him.”

The pair had a tense back-and-forth before they made up their mind – to get rid of Jamie for good.

“Anyone asks, I was here all day,” Cain said before he rushed off out of the hospital.

But a few eagle-eyed fans spotted a crucial problem in Cain’s plans after they suspected his supposed alibi would easily be caught out.

One viewer commented: “Because hospitals don’t have CCTV, do they?”

“Exactly what I thought,” replied another fan.

A third shared: “’If anyone asks I was here the whole day’ Really Cain? Wouldn’t the Hospital have CCTV? He’s actually going to go after Jamie for revenge yet again after what happened last time seriously? Mackenzie still has the video evidence after all right? #Emmerdale.”

It’s not yet known what the outcome of Jamie and Cain’s upcoming face-off will be as the former has made many enemies in the village.

But will Cain get away with his potential crimes, or will the hospital CCTV prove his alibi is false?

‘The Hunt’ Director Craig Zobel Fights Back Against Fake News, and Wins

Is This Proof That 'the Big Bang Theory' Exists in the Marvel Cinematic Universe?

When was Jessica Simpson married to Nick Lachey?