Emmerdale has revealed Moira Barton (played by Natalie J. Robb) will be the victim of a hit and run incident which is set to occur later this month, but the culprit who was behind the wheel is yet to be named. Speculation suggests Jamie Tate (Alexander Lincoln) ran the farmer down after spoiler images showed him driving last week, as well as his wife Andrea Tate (Anna Nightingale) threatening to expose him to the police. But, what if it was DI Mark Malone (Mark Womack) who was actually responsible for running Moira off the road?

Later this week, Cain Dingle (Jeff Hordley) is going to receive a phone call telling him his estranged wife has been a victim of a hit and run.

Despite the pair being officially separated, Cain cannot help but worry for the mother of his children and will head to the hospital immediately.

But he is shocked to see Moira lying in a bed with several wires surrounding her, as the nurse informs him her condition is critical.

Images from filming show Cain keeping a vigil by Moira’s bedside and when Moira’s son, Matty Barton (Ash Palmisciano) decides he needs to head home to freshen up, Cain says he will follow him out.

When Matty isn’t looking, however, Cain secretly stays behind and settles in the seat next to Moira’s bed and stays the night. 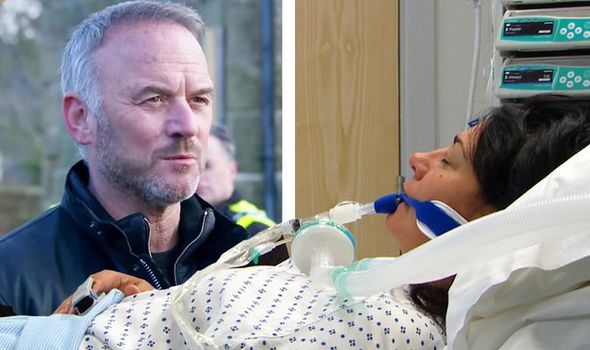 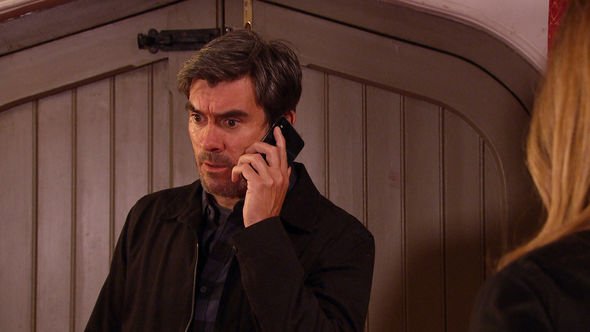 The next day, with Moira lying unconscious, Cain talks to the nurse about his wife’s condition, anxious he may lose her for good.

Cain isn’t the only Emmerdale resident in the hopsital ward as Jamie soon arrives, extremely dishevelled.

Belle Dingle (Eden Taylor-Draper) will approach him, sensing something is wrong with her lover.

Matty updates Belle about Moira’s injuries and explains how the police are still looking for witnesses, but the veterinary receptionist is distracted by Jamie’s reaction.

Later that day, concerned by Jamie’s behaviour, Belle visits Home Farm and is surprised to see Andrea opening the door.

The mother-of-one vanished last week, leaving daughter Millie with Jamie, but it seems a power shift has occurred. 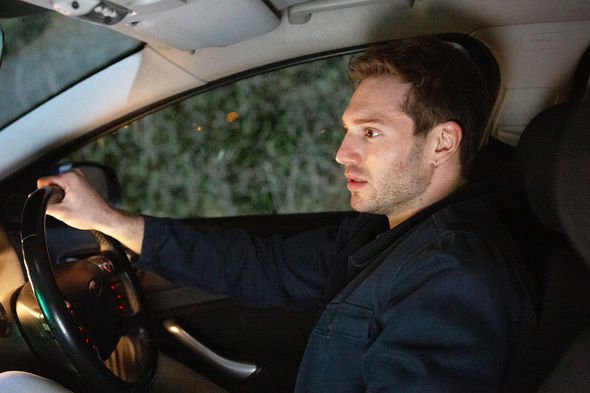 In a bid to get rid of Belle, Andrea tells her Jamie no longer loves her or wants to be with her, and will Belle fighting back tears and fleeing, Andrea sets about determining her position over Jamie’s future.

Apparently, Andrea is going to tell Jamie she is not done fighting for him or their family, but when he reveals he has fallen out of love with her, Andrea gets out the big guns and threatens to go to the police if he dares leave her.

But what if Andrea’s warning is false and it is in fact Malone who is responsible for Moira’s injuries?

It comes after Express.co.uk and other press outlets spoke to the actors who play Moira and Cain ahead of these spoilers. 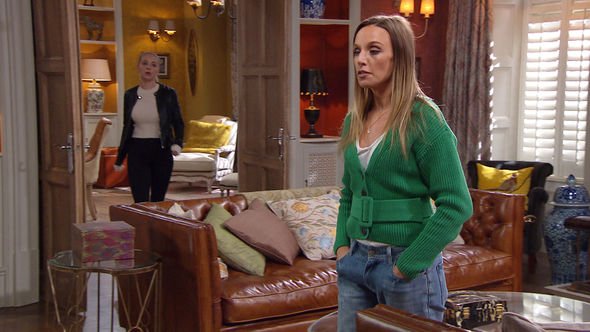 When asked whether Cain regrets not fighting for his marriage to Moira and working through her affair with Nate Carter (Jurell Carter) sooner, the actor revealed: “Prior to the hit and run they’ve had a little bit [of reconciliation] because there’s there’s a moment with Malone.

“[The] scene [show]s Malone’s insinuating that maybe there’s something going on between him and Moira and he’s just pushing all of Cain’s of buttons.

“And then he kind of goes off and then Moira is left with Cain and she’s trying to fix the car by the side of the road.

“And he’s too busy arguing with her to give her any help and just walks off and leaves her,” Jeff continued.

“The next time he [Cain] sees her [Moira] is in the hospital bed after this hit and run, so not only is he dealing with the fact that his wife is critically ill in bed, but there’s these feelings of guilt that he left her by the road, and the last time he saw her – he could have helped her, so he kind of thinks it’s all his fault.”

But how long could it be until Cain realises that Moira’s accident wasn’t his fault and instead it was Malone’s?

After all, the corrupt cop could’ve sabotaged Moira’s car, or caused it to fault which in then put her in direct danger.

Emmerdale fans are awaiting the day Malone is taken down and there has been speculation as to him being the character who is set to be killed off later this summer.

It comes after ITV boss John Whiston revealed during an interview with Sky that one village resident is set to leave in a body bag.

Could it be Malone? Or perhaps Moira doesn’t pull through…