Emmerdale‘s Maya Stepney makes a big decision over her future in the village tonight (December 4) following her disturbing behaviour towards Jacob Gallagher.

Maya (Louisa Clein) made a move on her 15-year-old student in last night’s episode, kissing him before pulling away and insisting it was a mistake.

Tuesday’s visit to the village sees Maya focus on damage control as she tries to make sure that Jacob (Joe-Warren Plant) doesn’t tell anyone what happened.

When they next see each other, Maya manipulates Jacob and urges him to keep quiet about the kiss for everyone’s sake.

Maya points out that she could lose her job at the school if anyone found out, leaving Jacob with conflicting emotions as he wonders what to do next.

Fearing that it’s only a matter of time before Jacob tells all if they’re living under the same roof, Maya sacrifices her ongoing relationship with his stepdad David Metcalfe (Matthew Wolfenden).

Maya tells David that it’s time for her to move out, leaving him baffled as he thought that things were going well between them.

As David searches for answers over what’s really going on, is it only a matter of time before he uncovers the truth? 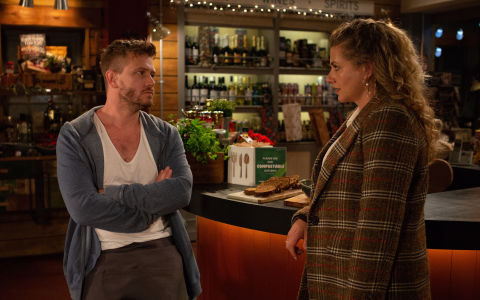 Emmerdale‘s cast and production team have been working alongside Barnardo’s on this storyline and have also met with young survivors of sexual abuse.

Show producer Laura Shaw commented: “It was important for us to tell this storyline authentically, so we approached Barnardo’s for advice on scripts and character behaviour.

“Our researchers, story team – along with actors Louisa, Matthew and Joe-Warren – met with Barnardo’s experts and young men who have been supported by the charity.

“We met some incredible individuals and were moved by their courage and willingness to help us tell this story sensitively. Hopefully it will make young people and their parents more aware of these issues and their impact.”

Emmerdale airs these scenes tonight at 7pm on ITV. 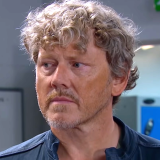 Digital Spy Soap Scoop video – hit play below for all the latest Emmerdale spoilers, as Harriet and Dawn’s mysterious past is revealed and Jessie goes head-to-head with Charity.