Aaron B. Koontz directed and co-wrote the film that will be released theatrically and on VOD in August 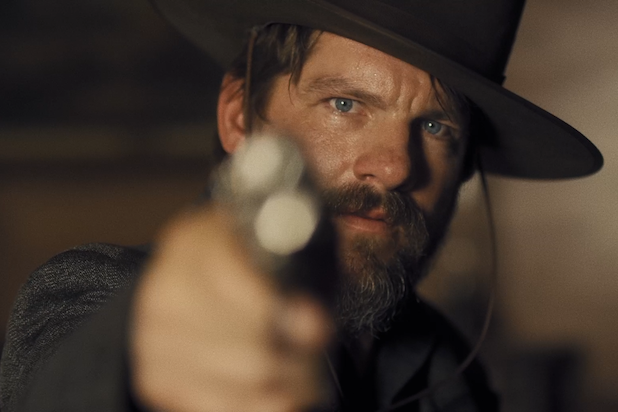 RLJE Films and the horror streaming service Shudder have teamed up to acquire the North American rights to “The Pale Door” a horror Western from the famed horror magazine Fangoria and Paper Street Pictures, it was announced Thursday.

“The Pale Door” is directed by Aaron B. Koontz (“Camera Obscura,” “Scare Package”) and is the latest hybrid of the horror and Western genres after Fangoria CEO Dallas Sonnier saw success as a producer on the 2015 Kurt Russell movie “Bone Tomahawk.”

RLJE Films hopes to release the film theatrically and on VOD and digital HD in August 2020, and “The Pale Door” will then premiere on Shudder at a later date.

In “The Pale Door,” the Dalton gang finds shelter in a seemingly uninhabited ghost town after a train robbery goes south. Seeking help for their wounded leader, they are surprised to stumble upon a welcoming brothel in the town’s square. But the beautiful women who greet them are actually a coven of witches with very sinister plans for the unsuspecting outlaws.

“The Pale Door” is presented and executive produced by Joe R. Lansdale, the writer of “Bubba Ho-Tep” and “Cold In July.”

“Aaron B. Koontz brings a fresh and unique vision to ‘The Pale Door,’” chief acquisitions officer Mark Ward of RLJE Films said in a statement. “With the seamless blending of western, supernatural and horror, we’re confident genre fans will love this film.”

“An all-night witchy western is right at home on Shudder,” Emily Gotto, director of global acquisitions and co-productions for Shudder said in a statement. “After the delightful ‘Scare Package,’ we’re thrilled to continue our relationship with Aaron on his accomplished feature follow-up.”

“I had so much fun making ‘Bone Tomahawk,’ and the movie has experienced such a ridiculous amount of engagement from genre fans over the years, that I’ve been looking for another horror-western since,” Fangoria CEO Dallas Sonnier said in a statement. “Aaron B. Koontz is emerging as a wildly promising indie horror director, so we’re excited to introduce the community to this awesome movie he’s made, and see what’s next for him.”

“The Pale Door” is the sixth film produced by Fangoria after “Puppet Master: The Littlest Reich,” “Satanic Panic,” “VFW,” “Castle Freak” and the recently-wrapped “The Seventh Day,” which is currently in post-production and stars Guy Pearce as a renowned exorcist who teams up with a rookie priest for his first day of training.

Fangoria is an iconic horror and fan magazine with a die-hard fan base that has been around since 1979, and in 2018 it was acquired by Cinestate, the Texas-based production company run by producer Sonnier, who re-launched the magazine as a print-only quarterly collectible while extending the franchise into movies, podcasts, books, live events, and website aggregation.

RLJE Films’ recent releases include the Nicolas Cage thriller “Mandy,” “The Man Who Killed Hitler and Then Bigfoot” with Sam Elliott, and another Nic Cage film based on an H.P. Lovecraft story, “Color Out of Space.” They’ve recently acquired the Sundance film “Spree” starring Joe Keery and a Maisie Williams home-invasion thriller “The Owners.”

Ward and Jess DeLeo from RLJE Films and Gotto from Shudder negotiated the deal with James Norrie of AMP International on behalf of the filmmakers.

AMP is representing worldwide rights and will be presenting “The Pale Door” to buyers at the virtual market in Cannes.