Consider This: Conversations highlight television’s award-worthy productions through panel discussions with the artists themselves. The above video is in partnership by FX, produced by IndieWire’s Creative Producer Leonardo Adrian Garcia, and hosted by TV Deputy Editor and Critic Ben Travers.

[Editor’s Note: The interviews above and article below contain spoilers for “Fargo” Season 4, Episode 9, “East/West.”]

If you thought Noah Hawley’s shows could be ambiguous, just imagine how his crew felt when the “Fargo” showrunner gave them a simple yet mysterious direction before shooting Season 4: “Follow the yellow brick road.”

“We didn’t really know what that meant back in prep,” said J.R. Hawbaker, the series’ costume designer. “We were like, ‘OK, we’ve got the yellow brick road coming, we don’t really know where we’re going, but we’re going to follow Noah — he will get us there.’”

Sure enough, their trust was rewarded in Episode 9, “East/West,” a pivotal turning point for the fourth season as well as a striking homage to film history — namely, “The Wizard of Oz.” When your story is set in Kansas, and the climax involves a tornado, you have to at least nod to the history you’re building from.

“This ‘Wizard of Oz,’ ‘We’re not in Kansas anymore’ idea crept into the storytelling, so it felt like this was the place to embrace that metaphor,” Hawley said. “‘Wizard of Oz,’ of course, features a transition from black-and-white to color. For theirs, it came 15 minutes into the movie, and for us, it came in the last five minutes of the episode, but that sense of transformation, if earned, is a really powerful one.”

For “Fargo,” the key transformation emphasized in “East/West” was Satchel’s. Played by Rodney L. Jones III, the young boy was first introduced as part of a trade that would affect the lives of everyone involved. Satchel’s father, Loy Cannon (Chris Rock), exchanges his youngest son for Zero, the most junior member of the Fadda crime family. The deal was meant to keep the peace so both businesses could prosper, but tensions eventually start to rise, and Satchel gets whisked out of Kansas City by Rabbi Milligan (Ben Whishaw), his adopted protector who doesn’t want his adolescent charge to suffer the same fate he did.

“This season was very much about raising children, and who they grow up to be — we know that young Satchel is going to grow up and be Mike Milligan, played by Bokeem Woodbine in Season 2. The question, in a loose kind of way, is, ‘How does Point A reach Point B?’” Hawley said. “The fact that [Satchel] was raised not by one family, but by more than one family, and ultimately the most important figure in his life was this Irishman, who was himself an unwanted member of an Italian family, and who was desperate to try to keep Satchel from what Rabbi Milligan became.”

In his desperation, Rabbi Milligan takes Satchel to a boarding house called the Barton Arms. Despite the ominous historical marker outside — which denotes how former, unsuspecting guests were murdered in their sleep — the two request a room, only to be told that the house is split in two. One side is controlled by Picola Crumb and the other her sister, Iola. The owners technically share the Barton Arms, but their vehement disagreements resulted in a piece of dividing tape running the length of the house, up three flights of stairs, and ultimately separating the space into two distinct operations. Guests even have to answer a series of questions during check-in to determine where  — which side — they’ll be staying.

“The dining room and the bedrooms were built on stage, as well as part of that stairwell,” production designer Warren Allan Young said. “The entry foyer, the reception area, the sort of parlor where we first meet some of the guests, that was at the location. The home that we found about two hours outside of Chicago, literally in the middle of nowhere, it served a lot of needs and provided a lot of architectural elements we could tie into on the stage.”

Meanwhile, director Michael Uppendahl said they already had to do a lot of additional shooting tests to make sure sets, costumes, and more elements of the colorful mise en scene would translate properly when seen in black and white. 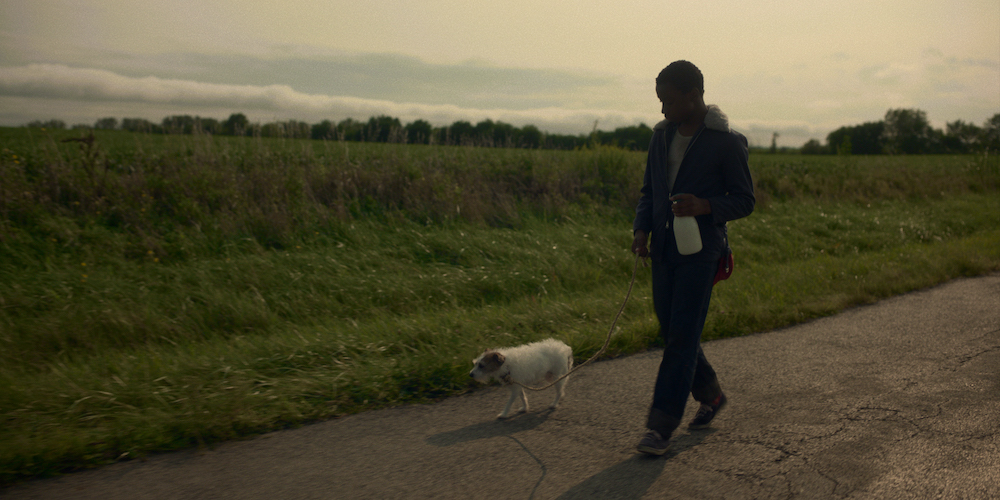 “In addition to the overall feel of black and white, so much of it was set in the Barton Arms, where we needed to divide it,” he said. “So in addition to being black and white, it had to be distinctly different from one side to the other, in a way that the audience could actually appreciate.”

For Satchel, this strange, very-“Fargo” boarding house not only illustrated a fork in the road, but soon forced him to become his own man. Rabbi Milligan goes in search of a gift for Satchel’s birthday, but he never comes back; a rival gangster finds the Rabbi, and a tornado snatches them both right off the ground. After the storm, with no one to help him and no place to go, Satchel steps out of his room at the Barton Arms, and his world looks completely different.

“The Technicolor explosion, where we get to go to color, was fun because we loaded in some colors in previous episodes to get ready for that one,” Hawbaker said. “So when Satchel leaves the house in previous episodes, I had to load in the Dorothy color palette on him, so I made sure it was there [for ‘East/West’] and we could get the full Dorothy [look], with the red hat and blue shirt effect. We really had to plan that out.”

Indeed, Satchel is the spitting image of Dorothy — at least, in dress — wearing a blue shirt, red hat, and even carrying a little dog discovered at the inn. Toss in the twister, and the transformation was complete. The “Fargo” team had followed the yellow brick road all the way to Satchel’s new life.

“This season was really like the history of American photography,” Dana Gonzales, the director of photography on Episode 9 and director of multiple Season 4 episodes, said. “What we did all season was build these palettes from the ground up, together. That’s how we create these defined looks, and then we do the shift to color. All of us have to work together perfectly to make the distinct look at this season is — it happened with the color, and the black and white was just another end-of-season challenge.”

“Fargo” Season 4 is available to stream via FX on Hulu.

'Below Deck Sailing Yacht': Madison Stalker Confirms She's Not Dating Luke Gulbranson From 'Summer House' (So Who Is Her Mystery Man?)