On this week’s Gold Rush on Discovery, the number one rated series for the network continues the twisty season as newcomer boss Rick Ness is trying to sort through his new business and be profitable while Parker Schnabel, his old boss, has continued bad luck.

But in Monsters and Critics’ exclusive preview clip from the latest episode, it is all about Mr. Tony Beets as his run of good luck seems to be wavering.

The clip shows a huge trammel being lifted by two cranes, using chains around the barrel to haul it up as Tony uses his walkie-talkie to tell Mike Scriba exactly what to do, and says to the camera, “With the two cranes you can play it safe. You want to be in control.”

As Mike Scriba is inside the cabin of the big crane and tries to follow Tony’s direction, Tony is beginning to get a wee bit agitated. “Hold it Scriba, sucker her in. Way out of f***ing kilter.”

Everyone is holding their breath as the cranes navigate the huge trammel in the air with simple chains looped around both ends of the barrel.

You may be wondering, what IS a trammel anyway and why is Tony so worried about it? 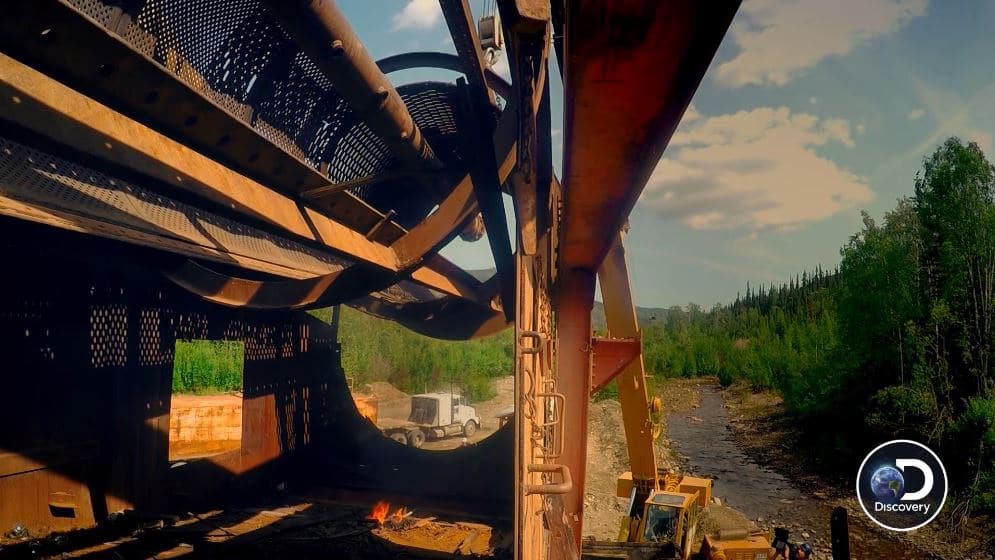 Trammels in mining are what the professional gold miners use to literally wash the trace and chunk gold from the slurry material that feeds into a rotary mining scrubber where it is very vigorously cleaned and sifted as the soil and rock mix is broken up. Then the target mineral, being gold in Beets’ case, is released in a separate part of the machine.

This raw material is piped through a rotating screen which allows for the waste dirt and rock to be ejected. The screened material that makes the grade is then further refined and passed on for final sifting and sorting. The end result after all this sorting, shaking and washing is lovely shiny gold!

So it’s kind of important that the trammel is not destroyed in the moving process, which is why Tony is pacing around the crane like a nervous mother hen watching Scriba navigate the arm of the crane as he positions the trammel to be moved.

But as often happens on Gold Rush, calamity strikes and the footage shows that as the trammel is hoisted well into the air, one of the supporting chains snaps suddenly.

This is where the clip abruptly ends leaving us to wonder, will this be an unexpected very bad and expensive day for the Dutchman?

Hopefully not. Last week, Tony’s son Michael and Juan Ibarra’s boat engine pretty much quit on them as they were transferring big equipment to one of Tony’s plants. Beets even noted on his Facebook page the bad luck his crew endured:

Make sure to tune in and see if the Dutchman lucks out or takes it in the shorts again.

What Happened to Caelynn Miller-Keyes and Dean Unglert After They Left Together on ‘Bachelor in Paradise’?

'Jersey Shore: Family Vacation' Season 5: Everything We Know so Far