Hollyoaks aired a heartbreaking revelation for Mandy Richardson on tonight’s (December 4) E4 first-look episode as she learned that her and Darren Osborne’s unborn child may have spina bifida.

Mandy was rushed into hospital last night after asking her friend-turned-love rival Nancy for help when she felt that something was wrong with the baby. Although the nurse finds the baby’s heartbeat, something worrying emerges in the tests and Mandy is left heartbroken when she is told her baby may have spina bifida.

Spina bifida is when a baby’s spine and spinal cord don’t develop properly in the womb, causing a gap in the spine, and many Hollyoaks viewers praised the soap for including the storyline and raising awareness about the condition:

Nancy being the one to take Mandy to the hospital after not being able to get hold of Darren also led to Mandy and Nancy having an emotional heart-to-heart after a number of very tense weeks.

“You were my best friend,” Mandy tells Nancy. “Getting Ella back from social services, dealing with Luke’s drinking… I couldn’t have done that without you.”

“So why did you do this to me?” Nancy questioned. “Was it all just a joke? Did you and Darren lie in bed laughing about silly old Nancy?”

The scene had many fans tearing up:

Still, the episode didn’t come without its twists, as when Darren finally found out where Mandy was and rushed to the hospital to be with her, Mandy made the decision to lie to him and told him that their baby was alright rather than worry him.

Surely this isn’t a lie that Mandy will be able to keep going with Darren for too long?

Hollyoaks airs Mondays through Fridays at 6.30pm on Channel 4, with first-look episodes premiering at 7pm on E4.

Shine is a charity that provides specialist advice and support for spina bifida and hydrocephalus across England, Wales and Northern Ireland. 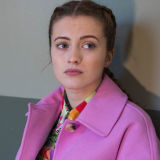 Digital Spy Soap Scoop video – hit play below for all the latest Hollyoaks spoilers, as Prince and Lily hit the rocks and Brody lashes out at Damon.