Rain Dove, Munroe Bergdorf and Gigi Goode are just some of the stars lending words of support to the health organization’s new phone initiative 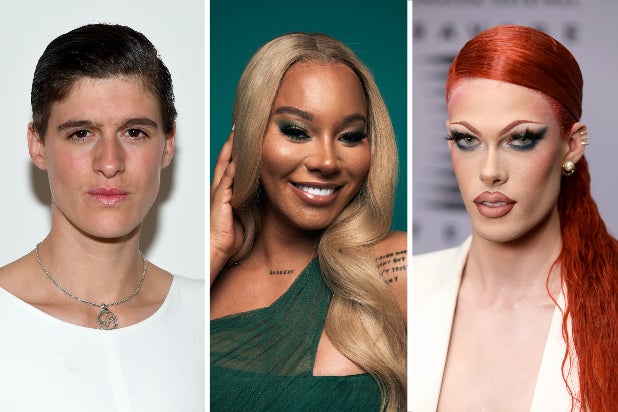 Queer/trans health platform FOLX has gone old school for its latest campaign, and leveraged new media stars like Rain Dove, Munroe Bergdorf and Gigi Goode to lend their voices to it — literally.

Last Friday, FOLX launched 1-888-FOLX-FAM, a hotline (yes, you actually have to dial in the numbers) where messages of love, hope and encouragement can be sent to and from the LGBTQ community. Over two dozen well-known influencers, advocates and activists recorded personalized voice messages for the service.

The hotline was the brainchild of FOLX Health’s vice president of marketing Rocco Kayiatos and creative director Florencia Garcia Carcagno, both of whom grew up in the ’80s and ’90s as LGBTQ youth. The hotline was inspired by the eras’ party lines — where users could dial in and talk anonymously to strangers (a precursor to internet chat rooms). Kayiatos, who is trans, recalls talking about his identity on such party lines, and Garcia Carcagno had come out on one.

So why bring back such a throwback phone experience three decades later?

“Everyone is so Zoom fatigued and there’s so been so screens on screens on screens in quarantine,” Kayiatos told TheWrap. “It might be a nice moment of taking a break and going back to a simpler time and having this very intimate but also depersonalized experience of hearing a voice tell you words of affirmation and love.”

Despite the heightened visibility of queer and trans people on social media, not all members of the community necessarily see themselves represented by influencers.

“There’s still this element of queer and trans folks seeing a specific person and thinking, ‘Well, that’s not what I look like so I’m still not represented,’” Kayiatos explained. “The idea of having these messages — instead of coming from a face that you disidentify with — coming from just voice-to-ear is a moment where you can rest those thoughts of not seeing yourself and just hearing yourself. You hear from people who struggle with feeling alone, struggle with feeling unlovable, or not having a place. Hearing a bank of voices saying that’s not true is very powerful and affirming.”

The irony of leveraging influencers — whose work tends to be more visual (i.e. Instagram photos or TikTok videos) — for an audio project was not lost on Kayiatos, but he says that the talent stepped up to the challenge.

“This wasn’t for marketing or paid inventive,” he explained. “They wanted to be a part of giving back. We wanted to have this intimate kind of connection from person to community that wasn’t so much about splashing it on Instagram or social media.”

FOLX launched the 1-888-FOLX-FAM campaign ahead of Valentine’s Day and received 500 calls within the first few hours. One caller listened to 18 minutes-worth of messages.

“How do we give something to the folks who feel without love or care on a holiday that can make people, especially in the state of a pandemic, feel very alone or unloved,” Kayiatos said of the timing.

Because the system is automated, FOLK Health plans to keep the hotline running at least through the end of the month and possibly beyond.

Check out more about the 1-888-FOLX-FAM campaign here and see posts from some of the voices lent below: