I’m a Celebrity‘s latest Bushtucker trial was unquestionably uncomfortable for both Rita Simons and James McVey, but fans think one of them deserved to do a bit more of the complaining.

Rita and James volunteered in Monday’s trial Stars of the Silver Scream, which was a decision that we imagine they eventually came to regret since it was absolutely disgusting.

“I’ve never actually won food for camp and Rita’s my partner in crime,” James explained as they headed off from camp. 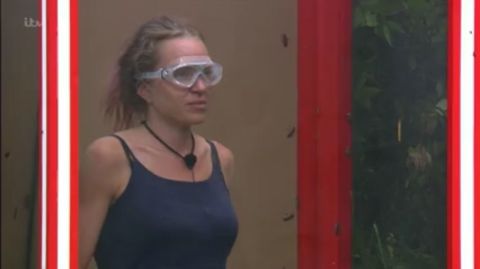 This one might not have been as physically-demanding as their four-part challenge on The Quest, but it was definitely much more gross. Once at the Bushtucker trial, Dec Donnelly explained the rules of the Stars of the Silver Scream.

“This is Stars of the Silver Scream, this requires both brain and brawn,” Dec told them. “One of you will push your head up into one of these 6 boxes that are all themed around different films, each with a Jungle twist. When your time starts your job is to release the star or stars that are inside using only your tongue.”

The host then revealed the twist: “However, the amount of time you have to release the stars will be determined by the other celebrity who will be locked inside a giant popcorn machine.

“Their job is to correctly answer a number of questions related to the film in the box. Each correct answer will earn the celebrity in the box 20 seconds to try and release the star. This is a Bushtucker Trial so you won’t be alone in either the boxes or the popcorn machine.”

The trial got off to an itchy start for Rita, who did ace some questions about Trainspotting, while unfortunately having cockroaches crawl up her bum. Meanwhile, James was covered in pig brains as he released a star with his tongue.

Although James missed a star when Rita only secured him 40 seconds by wrongly guessing there were only two High School Musical movies (WTF?!), he managed to ace another one in a Jaws-themed round while avoiding yabbies with his tongue.

The next round was Lord of the Stings, and after Rita secured him 60 seconds with three correct answers, James somehow got both stars on offer while dodging spiders, scorpions and cockroaches.

After acing two more rounds based on Shakespeare in Love and Wolf of Wall Street questions while James voted off spiders and crickets, the pair managed to win an impressive eight out of nine stars. Dec and Holly chatted with both, and reckoned Rita may have had it worse than James. 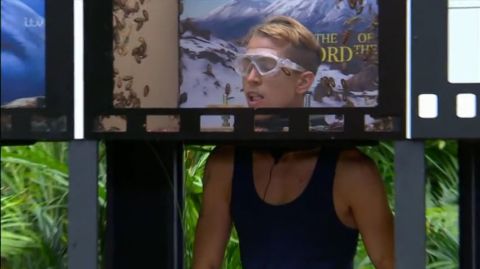 “In between James going between the boxes, I’ve just got to stand there with cockroaches in my bra, and they sting,” Rita agreed.

Viewers couldn’t disagree more with the trio, feeling Rita had no room to complain:

There was another reason fans were pissed too – she wrongly guessed there were only two High School Musical films:

Sharpay would be so disappointed…

How Chelsea Houska Is Delaying the $3 Million Lawsuit Against Her