Kate Garraway and Dominic Raab clashed on Good Morning Britain with the MP branding the host ‘cynical’ amid a heated debate on the Government’s ‘shambles’ hotel quarantine system.

The quarantine scheme, which was introduced on February 15, means that anyone arriving in the UK from a ‘red list’ of locations will need to self-isolate for 10 days in accommodation approved by the government.

Appearing via video link on Wednesday’s GMB, the MP began by discussing why he is calling for a UN resolution for ceasefires across the world to allow those living in war zones to get Covid-19 vaccines.

Kate agreed with Mr Raab’s ceasefire plan because it ‘benefits the whole world’, although, she soon started grilling the MP over why he wasn’t addressing the issues surrounding the hotel quarantine system.

The mum-of-two wanted to know who was checking that the right people were following the rules. 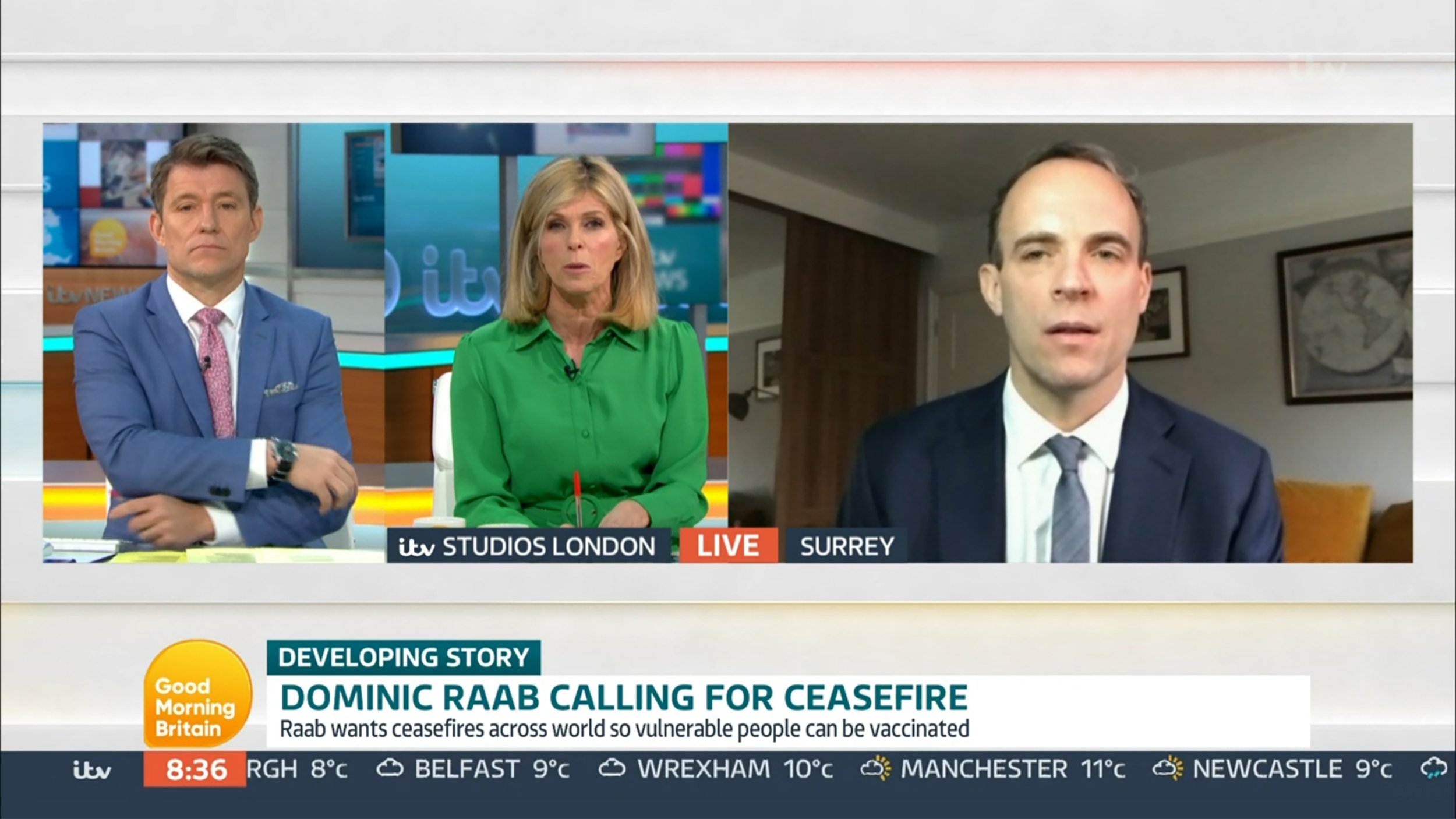 To which Mr Raab replied: ‘So, first of all Kate, I think it’s rather cynical what you suggested. I don’t think that’s fair at all.’

‘Hang on I wasn’t saying anything cynical,’ Kate interrupted. ‘We were told that you wanted to talk about that this morning and it’s an important thing to talk about.

‘But I’m just thinking everyone watching that you kicked off with that will think “Why’s he talking about that when we’ve got this chaos at home?”

‘It is my job to put their thoughts to you. So, you are welcome to explain why you put that above the situation which many people think is a fiasco.’

Mr Raab went on to explain that the government ‘already had a system in place’ and that anyone returning to the UK needs to take a Covid-19 test.

After mentioning nations where ‘enforcement is difficult’, Kate pressed Mr Raab to address the issues in the UK, ‘where we do have control’.

The minister went on to plead with Kate to let him answer as he claimed that people were ‘fed up with the media not allowing politicians to give honest answers’.

Kate replied: ‘You’re saying things I haven’t said so I’ve got to clarify it otherwise you’re not going to have a chance to answer the question if you haven’t understood it.’

Mr Raab concluded the interview by discussing that the hotel quarantine rules are ‘very clear’ and while insisting again they can’t control the law enforcement in other countries, the Government can make sure that no one gets on a flight unless they’ve had a Covid-19 test.

The interview sparked a reaction from viewers, with many calling the minister our for branding Kate ‘cynical’.

Another commented: ‘Just watched the Raab interview on GMB and wow @kategarraway was brilliant with her questioning.

‘So tired of the way this government evades questions & OMG how arrogant he was. Couldn’t deal with Kate and insults her by saying she’s being cynical.’

While one added: ‘Good work @kategarraway PS – Cynical, I think she’s anything but.’

‘Emily In Paris’ Renewed At Netflix For Season 2

Jack Leach on lessons from India defeat, emulating Graeme Swann and Monty Panesar and planning for the Ashes