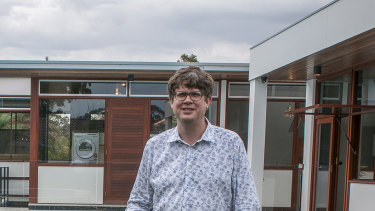 Just as passionate homeowners can spend years restoring dilapidated fixer-uppers to their former glory, the second season of Restoration Australia has taken its sweet time. It’s been three years since the first season, fronted by designer Sibella Court, aired to critical appreciation. The ABC then outsourced the format to Fremantle Media. The entire production personnel were replaced and Melbourne architect and RRR radio regular Stuart Harrison installed as host. The result is six restorations spanning architectural design eras as well as the country. A sobering one-third of the projects that were filmed made it to air, with the rest having buckled under pressure, or come to a grinding halt. Compared to The Block, this is slow reno TV.

“Building work is inherently slow,” Harrison says. “Design work is also slow if you want to do it properly. Competition-based challenge shows do a good job within the crazy time that they have but design, thinking, building, history, investigation – it all takes an enormous amount of time. We’re not in a rush.”

The show opens with an ambitious – and expensive – project that is more replication than restoration. Tim Bult from coal-mining conglomerate Wesfarmers, and his wife, Lisa, rebuild their prized “Paganin” house in Perth, a post-modernist masterpiece designed by Bulgarian-born architect, Iwan Iwanoff, after it was razed by fire. Such is their slavish attention to detail, that Bult flies to Italy to personally inspect black marble to ensure its vein matches the original.

“Modernist and post-war styles have come back into fashion,” Harrison says. “Culturally we’re seeing an appreciation of this era. It’s a really critical moment because these buildings are often not heritage protected. The Paganin house is a great example and it’s wonderful to see it back.”

Such extravagance is not part of every restoration in this series. Later episodes include church, stables and gasworks conversions; and 19th century dwellings adapted for modern convenience. Some near miracles are performed on very tight budgets.

“This is not just about the wealthy,” Harrison says. “There’s a very strong perception that architecture and good design is always a kind of a luxury and that’s not the case. In my own practice, I’m not doing any designs for wealthy people. I’m working on schools and houses with very tight budgets.”

Each completed project results in not just a home for its proud, if weary owners, but a piece of Australian history preserved.

“I’m a bit fan of the periods associated with great booms in Australia,” Harrison says. “Marvellous Melbourne in the 1880s, the gold boom in the 1890s in WA, all the mine or land speculation booms – they all bring with them a kind of jolt to the architectural expression of the day. These great boom styles gathered across the country capture these temporary moments where everyone’s got money and they’re spending it on good quality buildings There are really interesting ways of reading history through the buildings.”

Inspired by the Paganin house as a student in Perth in the 1990s, Harrison found covering its rebuild especially dear to his heart.

“When I was studying, Iwanoff was still seen as a bit of a fruitcake because he was a sort of deviant from some of the things that you’re supposed to do in modernism. He was unorthodox. He’s gone from a person who didn’t follow the rules of the day to something like the Gaudi of Perth.”