Meghan Markle and Prince Harry last month unveiled plans to give up their senior royal roles to create a more “progressive” system to conduct work on causes they care about independently. The Duke and Duchess of Sussex temporarily relocated to Canada with their baby son Archie and have made a few appearances at private events in their new capacity, including at a JP Morgan conference in Miami last week. But celebrity commentator Perez Hilton warned Meghan and Harry’s engagement picks have already resulted in US media “questioning their motives”.

Speaking to Good Morning Britain, Mr Hilton said: “The American press has been very critical of Harry and Meghan diving deep into their business relationships.

“The money, where it’s coming from, questioning their motives.”

Prince Harry is believed to have also delivered a speech at the JP Morgan event in Florida last week and the Duke and Duchess though to have snatched $1million (£780,00) in speaking fees.

A royal insider also revealed Harry and Meghan returned again to the US this week for a meeting at the University of Stanford in the Duchess’ home state of California.

The meeting at the institution’s Palo Alto campus lasted a few hours and is believed to have been focused on Harry and Meghan’s plans to launch their new foundation in the Spring.

The visit also raised further questions on whether the Duke and Duchess of Sussex will soon be relocating again from Vancouver Island, where they have been staying with their son Archie for nearly three months, to California later in the year.

Except from some media reports, Meghan Markle and Prince Harry have kept a relatively low profile since announcing they would give up their position as working royals last month.

The couple had initially expressed the wish to continue working on behalf of the Queen in some capacity but they later agreed to step away completely after intense discussions with Her Majesty, Prince Charles and Prince William.

READ MORE: Prince Harry ‘doesn’t regret’ his and Meghan’s decision and is ‘happy’

The Duchess of Sussex did not take part in the talks, choosing instead to fly back to Canada to reunite with son Archie after a two-day visit to the UK to make the announcement.

The Duke of Sussex reunited with his wife and son the following week after the last series of royal engagements in London.

The new system devised with the help of the Queen, which will see Harry and Meghan effectively become private citizens, is set to come into effect in the Spring as Palace staffers hone out the details.

Meghan and Harry are however expected to head back to the UK for a final time in March to attend the annual celebrations marking Commonwealth Day. 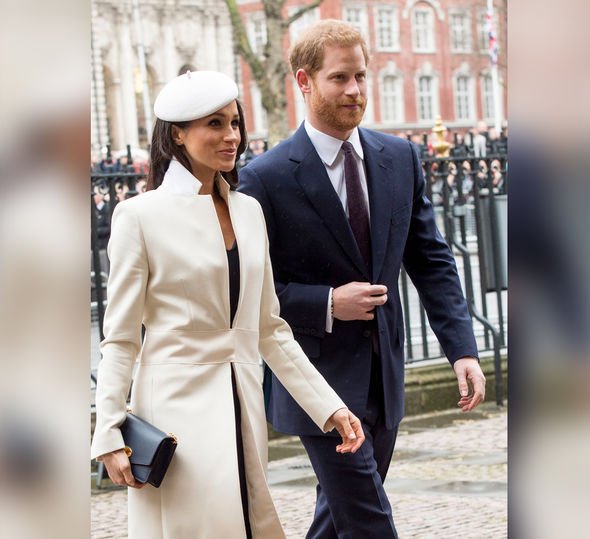 Harry and Meghan are President and Vice-President of the Queen’s Commonwealth Trust (QCT), so their appearance at the event will undoubtedly fall in line with their roles.

Representatives from the governments of the 53 member states of the Commonwealth will gather together at Westminster Abbey for the event on March 9.

The couple attended last year’s ceremony while Meghan Markle was heavily pregnant with their son Archie.

Commonwealth Day is an annual celebration that is observed across the Commonwealth, and it is a special moment for Her Majesty as the head of the network of nations.

It draws together countries from Africa, Asia, the Caribbean and Americas, the Pacific and Europe to celebrate the alliance.

The theme for the 2020 Commonwealth Day is: “Delivering a Common Future: Connecting, Innovating, Transforming.”

Claire Foy ‘feared for her life’ after creep stalker bombarded star with 1,000 ‘graphic’ emails & turned up at her door | The Sun