Money Heist is the international hit crime drama that has had Netflix subscribers on the edge of their seats for four series. La Casa de Papel was cancelled last year but fear not, as there is one more series left to end the show on a high. Theories have been emerging since the end of its previous season with more making the rounds following the release of some pictures from series five.

The gang was last seen in the middle of a heist at the Bank of Spain, trying to figure out a way for all of them to escape alive and with the money.

In the midst of figuring out what to do next, Stockholm (played by Esther Acebo) and Denver (Jaime Lorente) weren’t getting along.

They had an argument the night before as Denver didn’t think she should go as she had little criminal experience.

She didn’t listen to him and decided to go anyway, even if he didn’t approve of it. 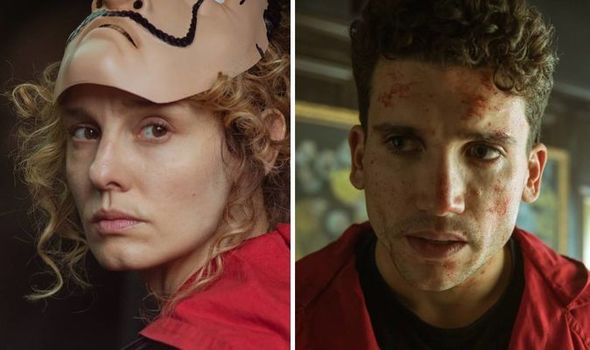 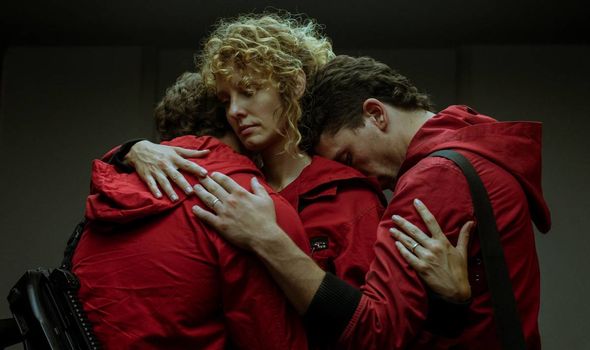 Stockholm later saw how he intimidated a hostage and she had second thoughts about their relationship, much to his frustration.

Then when Rio (Miguel Herrán) returned, she supported him through his PTSD which upset him even more as he believed there could be a romantic connection between them.

So their relationship was already on the brink by the end of season four.

Netflix has recently released some images from season five which now tease the end of Stockholm. 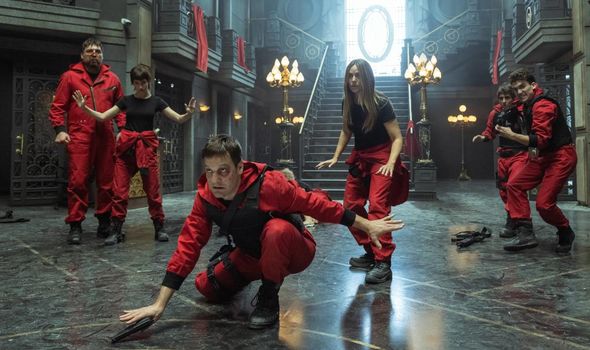 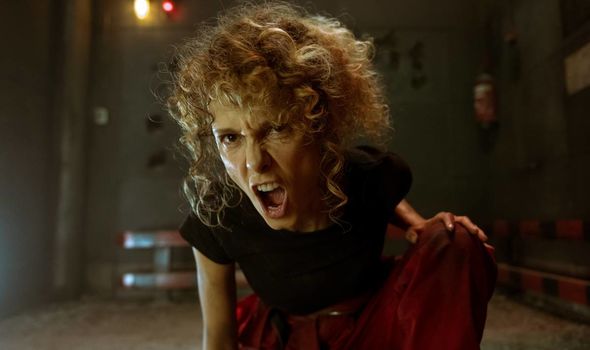 The picture sees the gang looking at an unknown threat, forcing them to all put their hands up.

Palermo (Rodrigo de la Serna) is closer to the ground as he is dropping his gun to prove he isn’t a threat.

At first, it doesn’t look like Stockholm is there but her blond curly hair can be seen in the background over Palermo’s right shoulder.

Alternatively, Denver is in the corner of the picture looking angry and upset, holding his gun up.

She is lying on the floor with no shoes on her feet but what has happened to her?

Taking to Reddit, fans have already picked up on the fact something could happen to Denver’s girlfriend.

One fan stated: “Denver looks very angry, something will happen with Stockholm…”

Another commented: “I would also say that something might to happen to either Stockholm or Denver – they might not die but something traumatic could happen”.

While a third added: “Denver, Stockholm and Manilla will be linked in S5, and one of them will die”.

Mónica Gaztambide, who is now better known as Stockholm, started off as a hostage during the Royal Mint of Spain heist.

She was working as a secretary and was taken captive in the vault.

Here, Mónica spent time with Denver and quickly developed feelings for him, so decided to run away with the gang.

She decided on the code name Stockholm after “Stockholm Syndrome” which is where people fall in love with their captors.

Money Heist is available to watch on Netflix.

The Bachelorette producers always planned to replace Clare Crawley with Tayshia Adams, according to Reality Steve