During Saturday morning’s BBC Breakfast, weatherman Ben Rich told hosts Naga Munchetty and Charlie Stayt that he was going to a barbecue on Sunday afternoon before he told them what the weather was going to be like for the Bank Holiday weekend. It comes after Charlie spoke about the social experiment in Liverpool, where 3,000 people were able to socialise in a nightclub without wearing a face mask or covering as coronavirus rules begin to ease.

“The normal rules apply, don’t they about social distancing and who you can meet? Maybe some people want to get outdoors, how’s it looking?” Charlie quizzed.

Ben proceeded to explain the weather for the UK this weekend was set to be “pretty mixed”.

He continued: “It’s a lovely looking start, it’s a promising start for anyone who might be heading outdoors. But we will see some showers.” 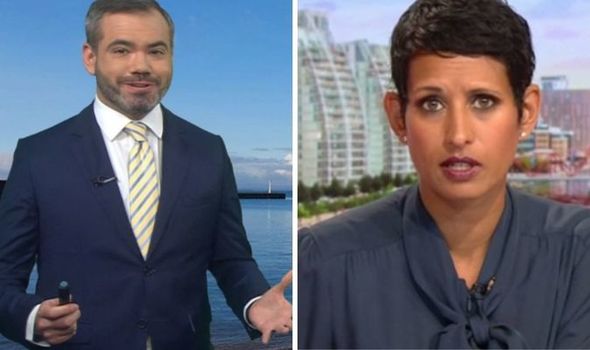 After giving the weather forecast, Charlie went on to ask Ben about his friend who is having the barbecue on Sunday.

He said: “Ben, the mystery person who might be having a barbecue in the near future. If you had to paint a picture of the lawn in the garden if there were one, what would the lawn look like?”

Ben told him: “It’s not actually my lawn. It’s some friends’ lawn and knowing my friend, it’s probably brown and patchy.”

A shocked Naga chipped into the conversation as she accused Ben of lawn shaming. She said: “Oh, you’ve just lawn shamed someone on national television.

“Wow, I don’t think you’ll be having any food at the barbeque.”

'Survivor 40: Winners at War': Is Tonight's Finale Episode the Longest in the History of the Show?

The untold truth of Ant Anstead