Piers Morgan, 55, and Susanna Reid, 49, were on hand to inform viewers of headlines from around the globe, including the latest developments in the coronavirus pandemic. However, the Good Morning Britain hosts ended up discussing whether or not vegan products should be named with words usually associated with meat-based items. With the pair voicing opposing views, they clashed with one another, leading the latter to shut down the outspoken journalist on the ITV news show.

The row came after reports emerged suggesting fast-food giant McDonalds is set to release a vegan and plant-based line of items from next year.

“The McPlant, the meat-free range which is total nonsense,” Piers remarked as his colleague said that sounded “right up her street.”

“They should stop using the term burger to describe the new product, saying it’s false marketing it’s not a burger,” the outspoken journalist declared.

Susanna was clear to defend the use of the word burger attached to vegan products, adding: “A veggie burger is a burger.

“It’s a burger just because it doesn’t have the word meat in it, it’s not a beetmurger [beetroot burger], it’s a burger,” she continued. 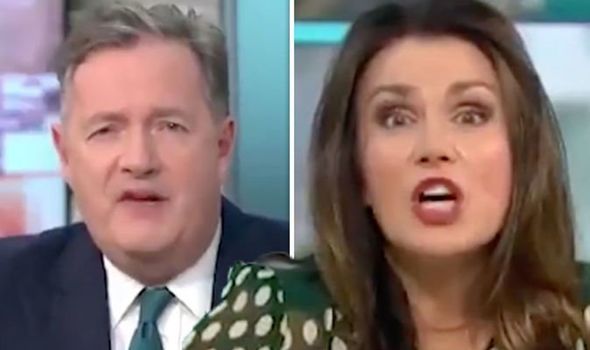 “Look it up in the dictionary, a burger is a meat product and so is a sausage. Why do vegans want to use our language? Piers asked.

“What do you mean, OUR language? Are we allowed to use the word food or is that your language?” Susanna hit back.

“Yes, because food is not descriptive of meat,” her co-star remarked, to which she replied: “A burger is not a description of meat. I don’t ask for a burger cut.”

Defending his point of view, the Life Stories star explained: “In France, they don’t allow this. They don’t allow vegan and vegetarian products to use meat language, they think it’s a con.”

Look it up in the dictionary

“Good for them in France. Over here in the UK, we took back control of our burgers and of our vegan products,” Susanna commented.

“You hate meat so much that you want to call your products after meat products?” Piers asked, to which his co-star said: “Hang on a moment, it’s not a meat burger, it’s just a burger.”

The latter then read the definition of the term burger, explaining: “ It’s made of meat or other food made into a round, fairly fast shape, fried and usually eaten between two halves of a bread roll.

“I think you’ve just been comprehensibly dismissed,” she added as she shut down her colleague and put him in his place, although he tried to defend his point of view once more.