In his live-action remake of Disney’s “Dumbo,” Tim Burton plays with a legacy that he has helped burnish for decades, only to set it gleefully ablaze. Ho-hum until it takes a turn toward the fascinatingly weird, the movie is a welcome declaration of artistic independence for Burton, who often strains against aesthetic and industrial restrictions. Watching him cut loose (more recklessly than his flying baby elephant) is by far the most unexpected pleasure of this movie, which dusts off the 1941 animated charmer with exhilaratingly demented spirit.

One of Disney’s simplest, sweetest heart-tuggers (with some queasy racial stereotypes), the original “Dumbo” tells the story of a wee circus elephant whose enormous flappy ears enable him to fly. Based on a children’s book, it was made fast and proved a terrific success. The straightforward story might not have seemed an obvious choice for an auteurist project, particularly given this one’s cultivated eccentricities. But “Dumbo” is among the seemingly endless number of animated movies that Disney is giving a live-action makeover: “Jungle Book,” “The Lion King,” “Aladdin,” “Mulan,” “The Sword in the Stone,” and on and on until the end of the world (or movies) as we know it.

For roughly the first half-hour of the new “Dumbo,” Burton seems on autopilot as he introduces the characters and sets the old-timey scene with an otherworldly pale palette. (The script is by Ehren Kruger, whose credits include “The Brothers Grimm” and several “Transformers” movies.) The story opens in 1919 at a down-and-out circus owned by Max Medici (Danny DeVito, pumping life into his scenes), a ringmaster who presides over the movie’s busily milling, child-friendly freaks and geeks. By the time an earnest, tamped-down Colin Farrell enters as Holt, a big-tent trick rider turned disabled World War I veteran, the two-hours-plus running time feels a lot like a threat.

Things pick up when baby Dumbo arrives in a makeshift birthing bed. Now a digital cutie with gargantuan ears that hang off each side of his head like heavy leather curtains, the newest, littlest circus addition is conspicuously more animal than his childlike antecedent. Like the original, this Dumbo doesn’t speak, which perhaps is why Burton focuses on his unnaturally large, expressive eyes. (He’s an Indian elephant, so his trunk has one searching finger.) Those eyes moisten a lot, including when Holt’s drearily conceptualized and motherless — of course! — children (Nico Parker and Finley Hobbins) comfort Dumbo after his protective mom is sent to elephant jail.

In time, the kids help teach Dumbo to fly, coaxing him with a feather he snuffles into his trunk: He sneezes, and the exhalation sends him up. When he finally achieves genuine liftoff, soaring around the interior of the circus’s one-ring tent, Burton does, too. It’s ticklish fun to watch baby elephants of any kind, including an airborne one. That’s true even if Dumbo’s flights prove increasingly bleak because he’s at the mercy of some very bad people. Humans are secondary attractions in the 1941 movie (its animals are people proxies) but they crowd the remake. Most are just generic placeholders, but a few are strikingly brutal exploiters, none more so than V. A. Vandevere, a subversive invention.

Played by Michael Keaton in full live-wire mode, Vandevere is a stereotypical Richie Rich screen villain with a shadowy lair; dark designs; a wolfish smile; and a silky, possibly fatal femme, Colette (Eva Green, who adds some steel filament to a bauble). Keaton makes the character more memorable than most anyone here; Vandevere seems ready to dangerously pop. What makes him particularly arresting, though, is that he owns a sprawling, impersonal amusement park named Dreamland that is filled with menace and with attractions — Nightmare Island, Wonders of Science, Rocket to the Future and the ominously named Colosseum — that suggest a Disneyland Bizarro World. 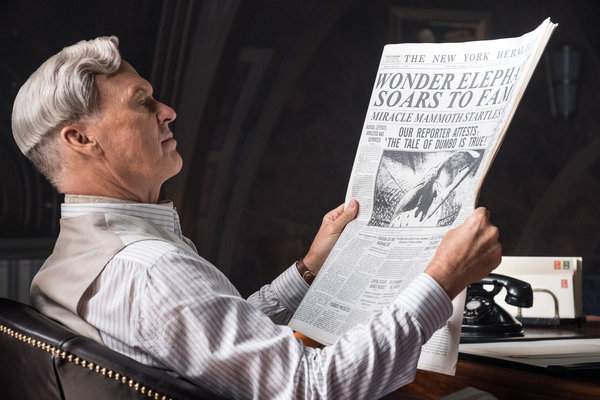 At first, Dreamland seems like just another reflexive flourish in a film about a group of ragtag struggling entertainers rescued by a star. There are a lot of movies about movies, and the default is generally self-flattering even at its most cynical. Disney’s have long been de facto advertisements for the company’s even more profitable offscreen world; its animated “Hercules” actually features a Hercules Store with merch that mirrors the stuff sold offscreen. In “Dumbo,” Burton takes this self-referential impulse to a startling level through the representation of its Walt Disney-style impresario — who speaks of magic and mystique — and then by lighting the whole shebang on fire.

By the time Holt is galloping through flames and Vandevere is threatening to kill Dumbo’s mom — matricide being a studio signature — the movie has gone enjoyably bonkers. The animals are roaring, the workers are revolting, and Burton has merrily turned what could have been another remake into something genuinely different and surprising. What exactly it is will partly depend on your view toward Disney. So it’s worth noting that for all the tumult and fury, this can also feel a bit like a bittersweet origin story: 1919 was the same year that the teenage Walt returned from war and was hired by a commercial art shop where he met Ub Iwerks, who helped create Mickey Mouse.

“They’re paying me to draw pictures,” Walt said, voicing the joy of creation that is too often missing in his company’s later movies but here burns with a vengeance.