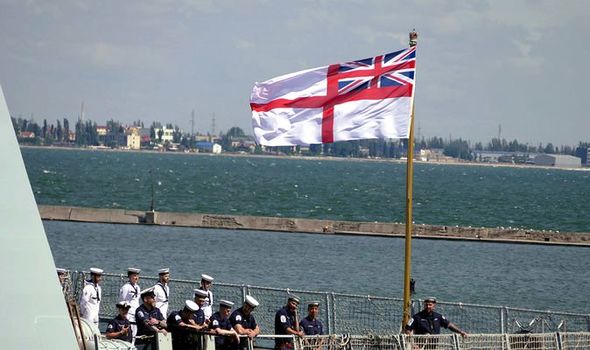 Commander David Burrell was in charge of HMS Trenchant, which features in the Channel 5 warts-and-all show Submarine: Life Under the Waves this week.

It is the first time the Navy has allowed cameras aboard a billion-pound nuclear submarine, as it follows operations to protect Britain’s nuclear deterrent against straying Russian subs near our territorial waters.

Asked about the apparently spacious quarters shown in the BBC’s Vigil drama, he replied: “I think our documentary will put a slightly more realistic spin on things. Ultimately, the objective for anyone making a programme like Vigil is to make good telly that people want to watch.

“The constraints of the sub­marine make it difficult to portray scenes, so I can understand why the makers of Vigil went for a slightly more groovy option than the truth that people will see on Channel 5.”

But he did accept that the fishing vessel storyline is a valid one. In Vigil, a trawler is apparently dragged to the bottom of the sea by a submarine.

Cdr Burrell said: “If we dive, and we’re not at periscope depth, we won’t allow ourselves to come within two miles of a fishing vessel, just to be absolutely safe and make sure we’re in no danger of snagging them in their nets – because if they get a 5,000-ton submarine in their nets, they’ll come off second best.”

The two-part documentary fol­­lows Tren­­chant, a “hunter-killer” submarine, during its “live operations”.

It is on a four-month tour of duty to the mid-Atlantic, helping to guard the UK’s Trident missiles kept on board another submarine.

“It’s very firmly out of our comfort zone to do a programme like this,” said Burrell. “I’ve been a submariner for nearly 20 years and it’s ingrained in our DNA to be very low profile and very secretive about what we do. So it goes against the grain of everything we’ve been trained to do, really.

“This is a secret world to most people out there but we happened to be doing stuff on HMS Trenchant which was OK to be filmed.” However, there were ground rules, he revealed.

“All the raw footage shot was classified and we effectively owned the information. That raw data then went through a screening process once the film company worked out what they wanted to use.”

While some operational matters remain under wraps other more down-to-earth details are not.

For a four-month tour for 130 crew, all food supplies must be hand-loaded, including 10,000 tea bags.

They also make their own water.

The all-male crew sleep in quarters the size of a “single garage”. There are 30 bunks in each grouping, with submariners sharing each one – for 12 hours at a time. It’s described as a “village under the water” where they eat, sleep, listen to sonar, get haircuts and play bingo.

Cdr Burrell said that both water and air are manufactured. “The only thing that limits the length of a tour is the amount of food we can carry.”

It’s all action, as well, at least on the programme. He adds: “There’s no shortage of mishaps. One sub­mariner burns his hand badly on a steam outlet, and there’s also fire on board. In the second episode, there’s a major loo blockage.

“Ten weeks’ filming went into the first episode so it appears more ­dramatic than it is. It does seem that we have a lot of misfortune but
60 engineers on board keep the boat going.”

Cdr Burrell adds: “Trenchant is old but is now no longer in commission. She was retired earlier this year. If you put someone on board now who worked on it in 1988 when it was commissioned, they wouldn’t recognise much of it.”

More dramatic than a blocked loo is the ever-present hunt for an enemy sub – most likely Russian – in “British sensitive waters”, close to our territorial waters.

It’s not long before this happens, triggering a very tense game of Battleships.

Cdr Burrell concedes: “I can’t go into more detail than you see on the show but there is more Russian activity in the Arctic because they are doing more stuff globally.

“It’s not just about the Russians. Our job is to protect the deterrent [Trident] and make sure it stays credible. We have to make sure there are no other submarines from any other country near the submarine that is on deterrent duty. It’s our job to go and find them.”

Everyone, Including Bette Midler, Wants Cecily Strong to Do Shouting Kimberly Guilfoyle on 'SNL'