Japril fans, I hope you’re sitting down because Sarah Drew is addressing fan theories about April Kepner and Jackson Avery’s reunion in the upcoming Grey’s Anatomy episode. In case you need a refresher: Sarah, who plays April, is returning for a guest appearance in “Look Up Child,” which airs on May 6. This is a Very Big Deal because producers wrote out the fan-favorite character in season 14 *sobs*.

So, Japril were married, but now they’re divorced and co-parent their daughter, Harriet. The promo for the episode shows Jackson driving to April’s house with v dramatic dialogue: “I know it seems impulsive and out of nowhere, but it’s not. I’ve thought it through. It’s just I thought…” Then the dialogue cuts off, April answers the door holding little Harriet and there’s a montage of the best Japril scenes (!!!!).

“April’s been living in Seattle this whole time,” Sarah explains in an E! News interview. “They’ve been co-parenting with Harriet, so they probably do a hand-off twice a week. They have a very healthy co-parenting relationship and have for the past three years.” 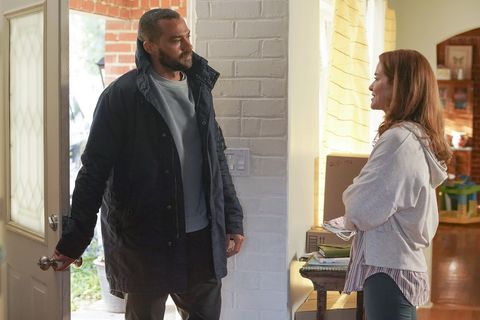 I’m going to need more than that, Sarah. Oh well, guess I’ll just want until the actual ep airs—not that I’m counting down the days or anything.

You love all the deets on Grey’s Anatomy. So do we. Let’s overanalyze them together.