What do Dwayne Johnson, Whoopi Goldberg and Stephen Hawking have in common? They’ve all taken part in the phenomenon that is Star Trek. While their names were never featured in any of the iconic opening credits sequences, even passing appearances are enough to be considered an important figure in Gene Roddenberry’s universe.

Since the franchise’s debut in 1966, celebrities from every quadrant of pop culture have continued to stop by the Star Trek TV shows. These notable names include professional wrestlers, theoretical physicists, iconic movie stars and future EGOT achievers. Special guest stars are a Star Trek trademark right up there with techno-babble dialogue and non-linear hallways. Most recently, the tradition has continued with legendary director David Cronenberg and comedian Tig Notaro taking up recurring roles on Star Trek: Discovery.

Sept. 8 was designated Star Trek Day on account of the original series’ premiere date — 55 years ago this week! To celebrate this milestone, ET is looking back at some of the guest stars who brushed shoulders with our favorite Starfleet crews. 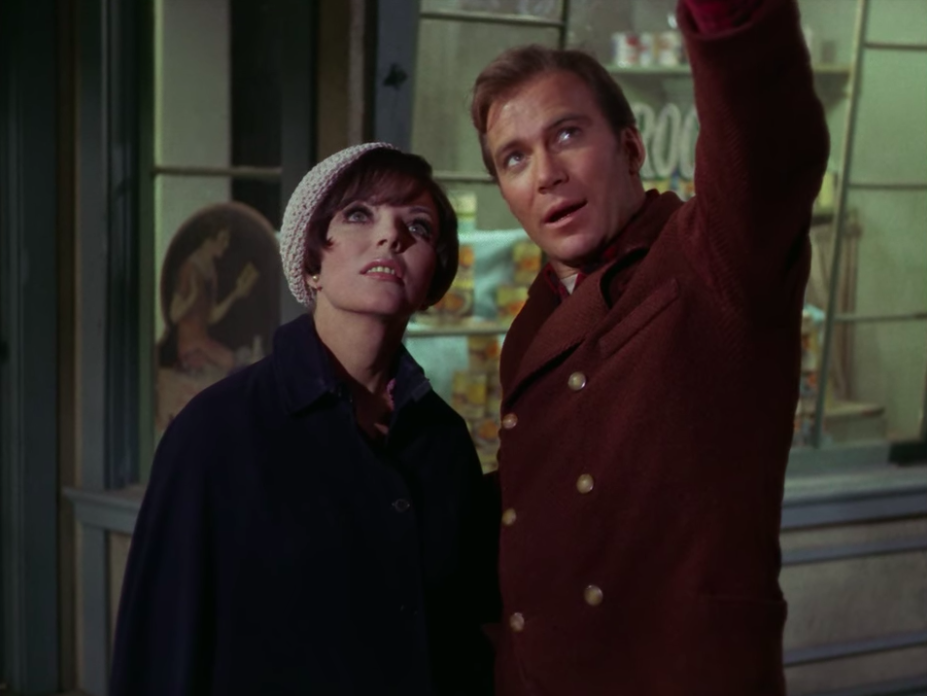 JOAN COLLINS – STAR TREK: THE ORIGINAL SERIES, “THE CITY ON THE EDGE OF FOREVER”

Before she portrayed one of the most popular TV characters of all time on Dynasty, one of Star Trek’s earliest guest stars was English actress Joan Collins in a memorable episode from the first season of the original series. Transported back to 1930s New York City, Captain Kirk (William Shatner) is devastated upon discovering he must let kind-hearted woman Edith Keeler (Collins) die in a traffic accident in order to maintain the universe’s timeline. Her role as Keeler was miles apart from do-no-gooder Alexis Colby, which made the character’s fate that much more tragic.

ET spoke with the TV icon at the “Star Trek: 30 Years and Beyond” event in 1996. In response to what was the most fun part of the experience for her, Collins replied, “I think watching my stand-in get hit by the truck.”

“It was supposed to be me, but she did it very well,” she recalled. 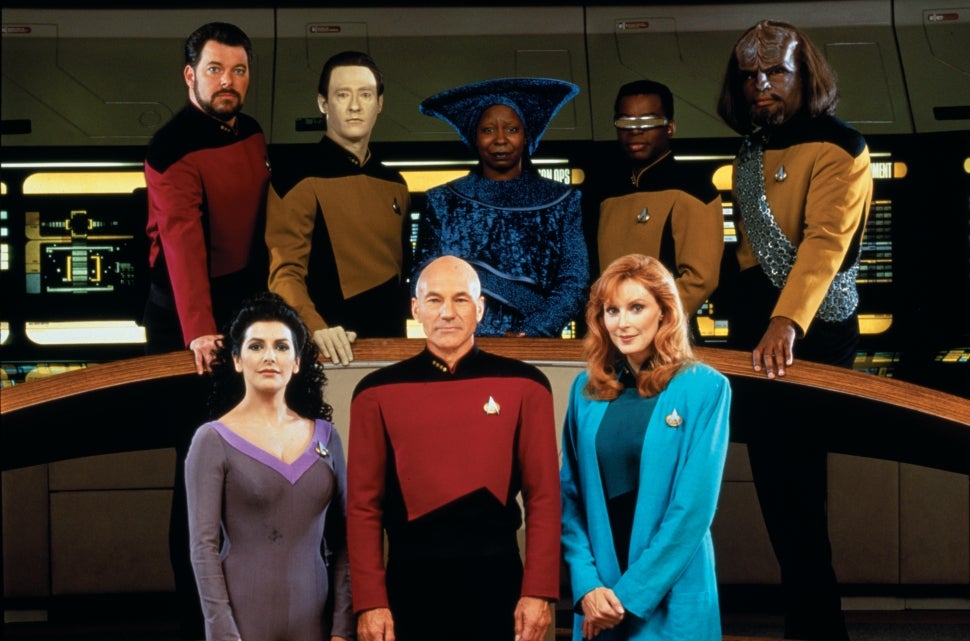 Just about everywhere Whoopi Goldberg appears, she’s in a category all of her own — and the Star Trek universe was no exception. This EGOT recipient was no mere guest star during her stint aboard the Enterprise-D, nor was her character, Guinan, merely a bartender at Ten Forward in nearly 30 episodes of The Next Generation. A guru. An ombudsman. A listener. And most importantly: a friend. Following the original series, Goldberg appreciated how the spinoff was carrying on the franchise’s positive vision of the future.

“This is one of the few shows that take place in the future that I saw as a kid where there were any Black people. Lieutenant Uhura was there. That gave me a lot of hope,” Goldberg told ET on the set in between filming scenes for “The Measure of a Man,” one of the franchise’s most cherished episodes. 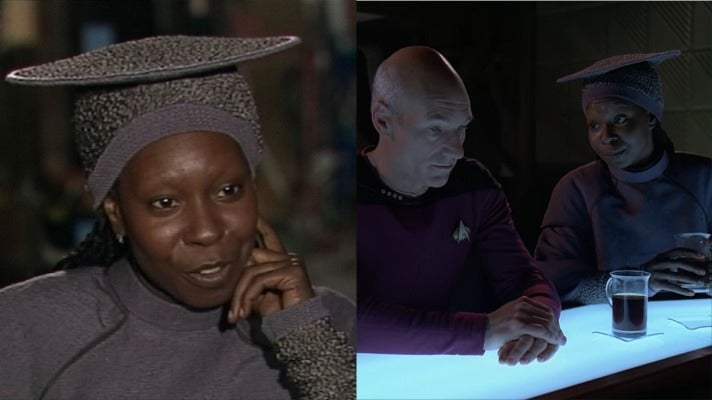 She added, “It’s very important that the future be hopeful and that’s what this is.”

Guinan’s alien origins and special abilities were never fully expanded upon, but fans may get a clearer picture if she once again shares the screen with Patrick Stewart on Star Trek: Picard. Her casting hasn’t been made official yet, but Stewart has formally extended an invitation for his old pal to return to the 24th century. 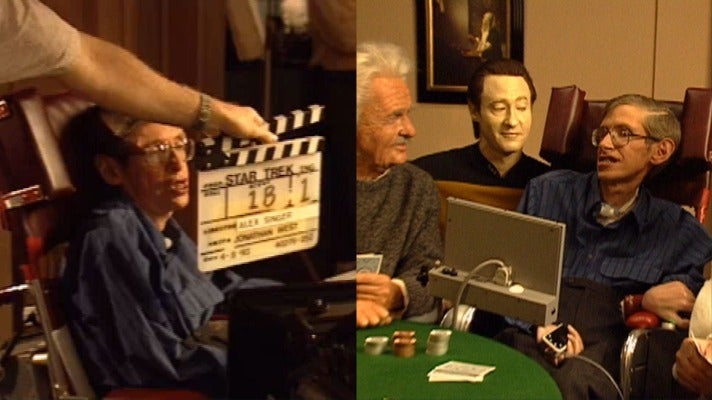 In perhaps the only instance of someone portraying themselves onscreen in the Star Trek canon, Professor Stephen Hawking appeared in The Next Generation via the holodeck. The episode’s cold open sees Data (Brent Spiner) in the middle of a game night with holographic projections of history’s greatest minds. Speaking with ET on the set in 1993, the late theoretical physicist explained that he had made his desire to be on the series known to producers.

“I said I would enjoy being in Star Trek,” Hawking said. “Obviously, I live in a different time frame to the Enterprise, but they got around that difficulty with this idea of a poker game with [Isaac] Newton and [Albert] Einstein. I think it works rather well.”

If given a real-life opportunity to attend this poker game, Hawking revealed he could do without one of these famous brains at the table. 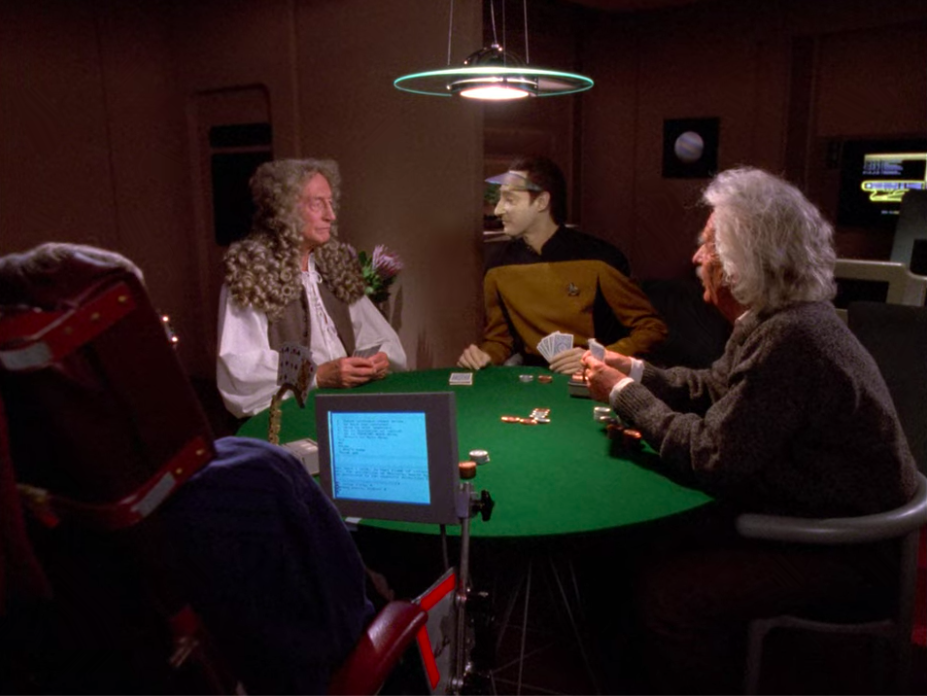 “I would very much liked to have met and talked with Einstein. I’m not so sure about Newton. By all accounts, he was a bad tempered and unpleasant man,” he shared. “As for Data, I’m sure he would be interesting.”

Data himself, Brent Spiner, could hardly believe he was acting alongside the world-renowned academic. “I don’t even know how to describe what it’s like working with him. I feel incredibly fortunate to be here, and [to be] in a scene with him of all things,” Spiner told ET on the set.

“I’m not sure I would attempt to describe him other than to say I’m not particularly used to working with this intelligent of human. Not to put my other castmates down. They’re all very bright,” Spiner said with a laugh. “But this is something quite exceptional.” 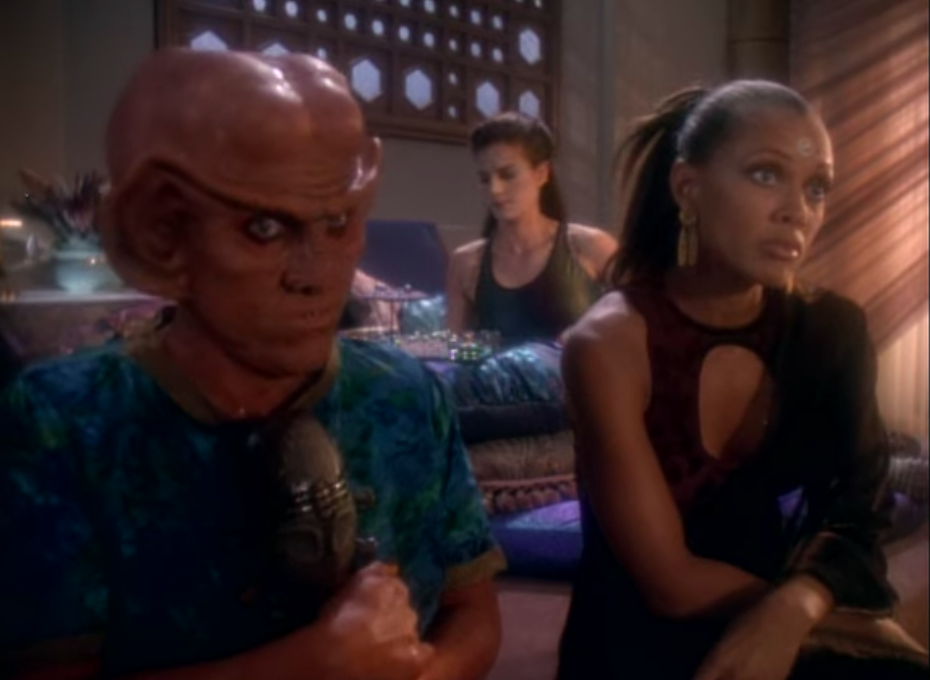 VANESSA WILLIAMS – STAR TREK: DEEP SPACE NINE, “LET HE WHO IS WITHOUT SIN…”

Come to Risa for the tropical paradise, but stay for elite concierge Arandis, played by Vanessa Williams. First appearing in “Captain’s Holiday” on The Next Generation, Risa was presented as the place where everyone goes to unwind and escape their day-to-day, quadrant-to-quadrant worries. Williams described the spa-like planet as “a Club Med in space.”

“When I actually saw the script it was quite provocative and alluring,” Williams told ET on the Deep Space Nine set in 1996. Once they started filming, the “Dreamin’” singer discovered just how talented Star Trek actors must be to recite the franchise’s trademark science jargon. “It looked relatively easy, but then once you actually have to say the dialogue and the techno-babble — and [make it] sound responsible and clear — that’s when you have to take your hats off to these cast members.”

She added, “Luckily, my theater training is kicking in.” 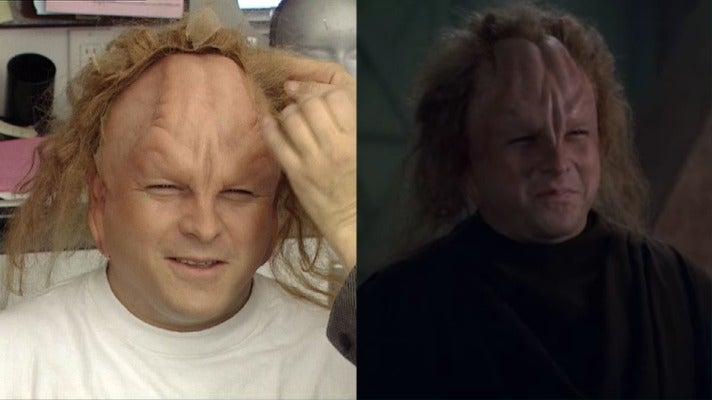 “[This cast is] a wonderful group. They really have a lot of fun. This is a very goofy set,” Jason Alexander told ET behind the scenes while sitting in the makeup chair in 1999.

Following the series finale of Seinfeld, Alexander transformed into one of the many aliens the Star Trek: Voyager crew encountered while traversing the Delta Quadrant. “I’m a die-hard Star Trek fan. Have been since I was 12,” Alexander said.

The cast provided him with some words of wisdom in regard to the famously lengthy prosthetic makeup sessions for the franchise’s extraterrestrials.

“Kate Mulgrew advised me to run for the hills as fast as I can,” Alexander joked. “And poor Ethan Phillips, who goes through this for three hours every day, he said, ‘Well, a good book will do.'” 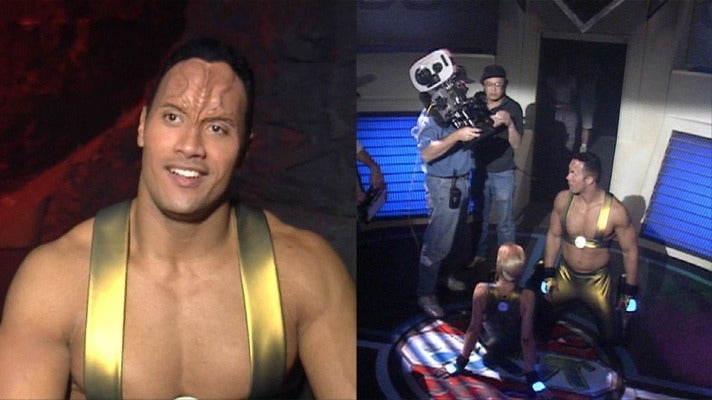 When Dwayne “The Rock” Johnson appeared on Star Trek: Voyager, the writers made him feel right at home. The WWE (previously known as WWF) superstar was dropped into a Delta Quadrant fight arena to face off against Seven of Nine (Jeri Ryan).

“[I’ve] beaten Stone Cold Steve Austin on numerous occasions. The Undertaker. Mankind. The list goes on and on and on,” Johnson explained to ET on the Voyager set in 1999. “But [Ryan,] she’s probably one of the toughest, if not, dare I say, the toughest The Rock has ever faced.”

Johnson even got to plant Ryan with his signature move, “The Rock Bottom,” during their fight sequence. While he wasn’t familiar with Star Trek before stepping onto the set, dedicated fan bases were certainly among his areas of expertise at the time.

“The following is tremendous,” Johnson said. “Star Trek fans are very, very passionate. Very similar to the World Wrestling Federation fans, so I can appreciate that passion.”

After originating his own unforgettable TV character, Rainn Wilson followed up The Office by stepping into the well-established role of Harry Mudd for Star Trek: Discovery and Star Trek: Short Treks. The merchant con-man plagued the Enterprise crew more than once across the original series and the animated series.

“A little bit charming. A little bit over the top. Kind of crazy,” Wilson described Mudd to ET at the premiere of Star Trek: Discovery in 2017. “He’s totally unpredictable. You never know what Harry Mudd is gonna get into next.”

Like Alexander, Wilson had some Trekkie credentials before he was cast as one of Star Trek’s most notorious antagonists.

“I had an Enterprise model that [I hand-painted.] I spent hours gazing at it longingly,” Wilson said. “So, to get to be part of the show is really super awesome.”

Every Star Trek series is available to stream on Paramount+.

‘Star Trek: Picard’ Season 2 to Feature the Return of Q

Who is Georgia Salamat on Best Home Cook?