The pure fire of their routine quickly sparked rumours of a romance between the pair behind the scenes, with fans in awe of their undeniable chemistry.

There has been continued speculation that they have started dating, with a source recently claiming that they share a ‘lovely romance’ after falling ‘head over heels for each other’.

Following all of the rumours swirling Kai and AJ, on Tuesday’s It Takes Two, host Rylan Clark-Neal decided to set the record straight, asking them outright if their partnership has turned into a real-life love story.

After acknowledging the incredible passion of their routine, Rylan questioned if the choreography was ‘too good’ as ‘it set the rumour mill going’.

‘Can we settle a few scores here please? I’ve known AJ for many a year now, I know she can’t lie to me, what’s going on?’ he asked directly, as AJ and Kai burst into laughter. 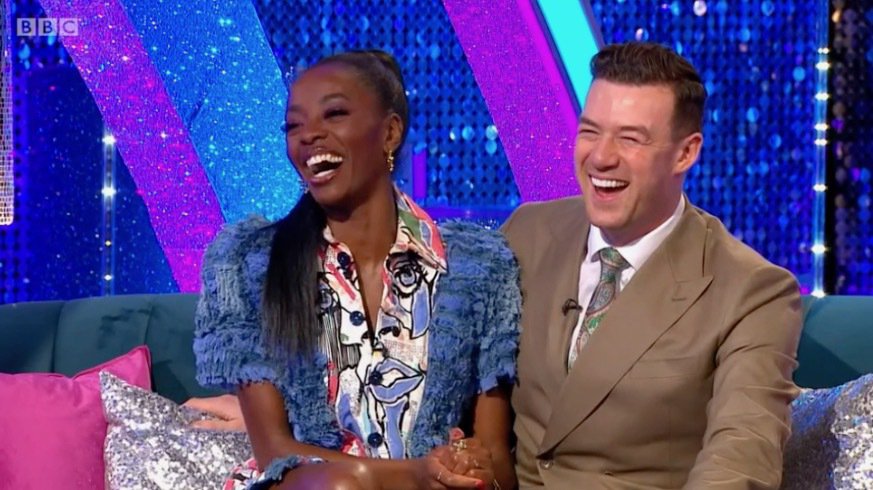 Kai took the lead with addressing the speculation, explaining that he previously said to AJ that if they managed to make viewers think that they were romantically involved, then they had achieved their aim with their performance.

While AJ didn’t speak on the romance rumours, she was grinning from ear to ear as Kai addressed their spark on the dancefloor.

‘We said this right, and I said this to you, I said if people react like this, then it means we’re doing something right, because that’s the way the dance should be danced,’ he said.

‘It was a very passionate song, a real fiery piece, and very intimate, and that’s what we wanted, and that is the characterisation of the Argentine Tango. So if people want to think that, then great, but we’re just doing our job and she did a great job,’ he added.

‘Just doing their job, alright? Stop it, leave them alone!’ Rylan exclaimed, addressing the camera as AJ and Kai continued to chuckle.

AJ then explained how watching previous Argentine Tango routines on Strictly inspired her, expressing how ‘glad’ she felt that she was able to perform the dance.

While Kai has seemingly set the record straight on the sizzle between him and Kai, we have a feeling the speculation among fans is going to die down anytime soon.

The pair are taking a trip back to ballroom for Halloween Week on Saturday, performing a Viennese Waltz to Ludwig Van Beethoven’s Moonlight Sonata.

Despite bringing the drama with their Argentine Tango, we have a feeling they’re going to amp up the intensity even more on Saturday night.

Strictly Come Dancing returns on Saturday at 7.10pm on BBC One.

Ozark spoilers: Ben’s fate foreshadowed in key T-shirt clue – did you spot it?