Prince Harry and Meghan Markle were photographed on Sunday attending a military cemetery in Los Angeles as the royal couple remain living in the United States. However, when this was discussed on GMB, Susanna Reid and Piers Morgan soon made it clear they had very different opinions on what the latter dubbed a so-called “PR stunt,” which led to the debate becoming slightly heated as his co-host instead decided to make the case for the photographs to have been released for the public.

It is claimed Prince Harry was not able to have a wreath laid at the Cenotaph in his name yesterday, on Remembrance Sunday.

Instead, the Duke and Duchess of Sussex were seen attending a military cemetery near their home in LA.

But when this event came up for discussion on the ITV breakfast show, the two hosts did not agree on how they felt about the images. 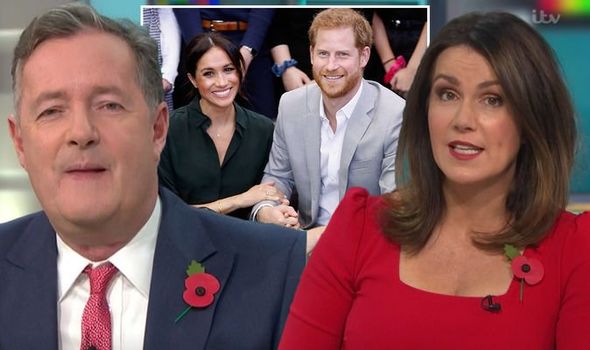 “They then release a series of images of themselves at a cemetery laying flowers and paying tribute.

“Prince Harry is perfectly entitled as a former member of the armed forces to pay tribute to the armed forces, of course, he is. However, this smacked to me as a really distasteful PR stunt,” Piers said.

“That, I’m sorry, it sticks in my gullet, he’s doing no duty,” the host added – but these comments saw both Susanna and guest Kevin Maguire hitting back.

Susanna, struggling to speak over her co-star, noted: “Okay, or, hang on a moment, my side of the story… is the armed forces mean a lot to Prince Harry.”