On this week’s The Chi it’s ironic that, after so many happy endings lately, Jada is dealt a truly awful one.

Emmett’s mom spends most of the hour navigating her relationship with Suede, the masseuse-with-benefits who’s seeming more and more like her boyfriend. They discuss what they are to each other. They dress up in ’70s gear to attend her high school reunion. And he’s gotten so familiar with her and her body that it’s Suede who points out a troubling lump in her breast while they’re in bed one day.

Jada says she’s known about the area for a while and gets it checked every year. But to humor him, she goes to her doctor… and finds out that the spot is cancerous.

We don’t know yet what stage the disease is in, or what Jada’s prognosis might be. All we know is that, at the end of the episode, she’s sobbing, and it’s heartbreaking.

* Emmett is so plagued with guilt over sleeping with Dom that he finally tells Tiffany while they’re having sex. Understandably, she is real mad. She storms out of their apartment and goes directly to see the client who has been very overt in his appreciation of her, and they sleep together. The next morning, she’s still at his place. 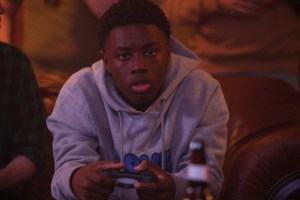 * Kevin, Jake, Jemma and their classmates go on a school-run college tour. Jemma goes on and on about how college is a scam, annoying Kevin. He goes looking for Jake, who’s having some special alone time with a while female classmate who solelmnly tells him, “Black lives will also matter to me.” They come across some older students playing video games; after a bet, Kevin’s talents with the controller win him some cash. The older guys offer him booze and a pill, which he takes; pretty soon, he’s throwing up on the floor in front of the trip’s chaperone. At home, Kiesha is disgusted with her brother. “I’m supposed to be at college. Instead, I’m picking your ass up from a college tour, because you don’t know how to act,” she says. Still, she promises not to tell Dre and Nina.

* Papa invites CNN’s Van Jones on his podcast and is bummed when he doesn’t show up. But Maisha steps in and freestyles a gorgeous verse over the beat Papa plays. He is awestruck (and with good reason).

* Kiesha is hating life, working at a thrift shop for a very exacting boss. Emmett accompanies Darnell on a shopping trip there, which allows Emmett and Kiesha to have a sweet conversation in which he tells her that she’s going to be all right, no matter what happens with her baby. 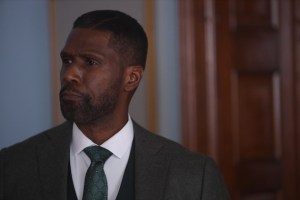 * Mayor Otis “Douda” Perry visits the officer Trig beat up, who is in the hospital. Officer Reeves believes that Douda ordered the beat-down. Douda counters that Reeves has several incidents “with young Black boys just minding their own business” over the course of his career. Then he walks out of the hospital and, without consulting either Roselyn or Marcus, he announces to protesters and reporters waiting outside that he’s fired Reeves. “Racist cops will not be tolerated on my watch,” he vows. Later, at an impromptu press conference, Douda goes a huge step farther: He tells everyone assembled that he’s defunding the Chicago police. The details of his plan? “We’ll figure this out,” he says, ending the press conference without taking any questions.

* Shaad, one of Trig’s friends from prison, is released, and Trig is there to pick him up. But the minute Shaad gets back to Trig’s place — to a surprise welcome home party — he aggressively flirts with Imani in a way that seems to make her uncomfortable. She’s even less pleased when Trig informs her that he’s agreed to let Shaad stay at their place while he re-establishes himself. “That man did a bid for me. I gotta look out for him,” he reasons, asking her to give his friend a chance. Imani grudgingly agrees. 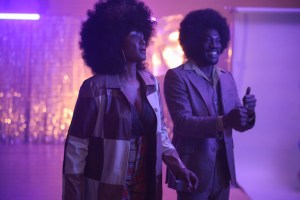 * Darnell, Nina, Dre, Jada and Suede attend the Class of 1998 reunion, but miss the email that lets them know that it’s no longer Cooley High-themed. So they show up with big afros and bigger bell bottoms. And when one of Jada’s high school frenemies comes over to inform them of the gaffe, she also makes it clear that she was one of Suede’s “massage” clients, which does not please Jada one bit. Afterward, Nina takes Suede aside and tells him that Jada is really looking for someone to grow old with. He says he wants to be that person. “You’ve gotta earn that spot,” she warns him. “I intend to,” he replies. Aww.

* Kevin, Nina and Dre accompany Kiesha to an ultrasound appointment. The baby is doing fine, but when the technician asks Kiesha if she wants to know the sex, she cries a little and says no.

Now it’s your turn. What did you think of the episode? Sound off in the comments!

AGT Dunkin’ Save Vote: How do you place a vote on America’s Got Talent?